Australia's Great Barrier Reef runs the risk of another summer of elevated coral bleaching if cyclones and other rain events don't arrive to "suck out the heat", agencies say.

Predictions from the Bureau of Meteorology and the top US forecaster, the National Oceanic and Atmospheric Administration, indicate water temperatures off north-eastern Australia will be above average in December and January. Should those warm conditions persist, NOAA sees an elevated risk of a fourth mass bleaching in six years.

"There is a good chance of bleaching on the Great Barrier Reef, especially inshore reefs, as well as bleaching of reefs along the northern coast including offshore islands," Mark Eakin, co-ordinator of NOAA's Coral Reef Watch program, said. "While this can certainly change depending on weather patterns, the outlook indicates a need for enhanced readiness."

David Wachenfeld, the Marine Park Authority's chief scientist, is more cautious, noting modelling beyond January would not take into account the likelihood of a busier-than-usual tropical cyclone season and associated rains and floods that could "suck that heat out of the system".

The chances that there will be more than the average of four tropical cyclones off eastern Australia this season are about two-in-three, according to the Bureau of Meteorology's cyclone outlook.

The higher than usual number is linked to the La Nina event now under way in the Pacific, a phase that favours increased storms across northern Australia.

"While cyclones can be damaging for coral reefs and flooding can wash pollutants into marine waters, increased rain and associated cloud cover may provide shading over the reef, cooling water temperatures," Dr Wachenfeld said, stressing the uncertainty of picking precisely the local weather conditions several months out.

Still, with sea-surface temperatures about 0.8 degrees warmer than a century ago, "the whole reef is heating up", Dr Wachenfeld said, increasing the odds of bleaching during what are relatively cool years in terms of the El Nino-La Nina seesaw of climate drivers in the Pacific. 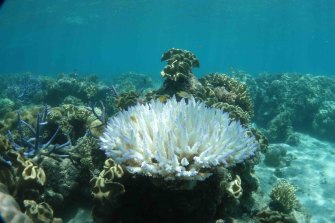 Corals rely on algae known as zooxanthellae to provide the bulk of their energy and much of their vibrant colour. When exposed to sustained abnormal heat – measured in so-called degree-heating days – corals begin to expel the algae, leading to mass bleaching.

The Great Barrier Reef suffered unprecedented back-to-back coral bleaching in 2016 and 2017, and again in 2020. Dr Wachenfeld said researchers are still trying to determine how much coral cover was lost in this year's event, and how corals in general are responding to the unnatural bouts of heat stress over a short period.

Dr Eakin said regardless of whether there is a La Nina or El Nino event, "it appears bleaching on the Great Barrier Reef is becoming more frequent and severe. This is most likely being driven by human-caused global warming."

On current projections, 2020 will end as one of the warmest years on record despite the Pacific entering the La Nina phase in recent months and possibly even a strong one.

Dr Eakin said the fact that another bleaching event was even a possibility in a La Nina year is an indicator how vulnerable the reef has become.

"This is a clear sign of what we can continue to expect if we all don’t work to get climate change under control."

The Bureau and CSIRO echoed those concerns in the recently released State of the Climate report.

"Along with ocean acidification and nutrient runoff, the increased severity and frequency of marine heatwaves are likely to reduce reef resilience and hinder coral recovery from future bleaching events," it said.

"Worsening impacts on coral reefs from marine heatwaves are expected in the future with continued warming but the intensification of marine heatwaves is much larger with higher global greenhouse gas emissions."

West Ham have offered 33 million euros for En-Nasiriyah. Sevilla refused
Gattuso on 1:3 with Verona: You can't play like this if Napoli want to return to the Champions League
Sobolev on Tedesco in Spartak: Perhaps we will finish the season well, and he will want to stay
Liverpool are close to the transfer of England U16 striker Gordon for 1+ million pounds
Simeone on the leadership of Atletico in La Liga: We only think about the next opponent
The former defender of Inter, Schelotto has moved to Argentinian racing
Kramaric scored the 74th goal in the Bundesliga, breaking Olic's record among Croats
Source https://www.theage.com.au/environment/climate-change/experts-fear-fourth-mass-coral-bleaching-event-in-six-years-20201126-p56i2h.html?ref=rss&utm_medium=rss&utm_source=rss_feed