Paris: Women’s tennis is not as appealing as the men’s game at the moment, French Open tournament director Amelie Mauresmo said after questions were raised about the scheduling of the claycourt grand slam on Wednesday.

One night match has been on the program every day at 9pm (Paris time) from the first Monday until the quarter-finals, potentially leaving spectators with no public transport to return home in case of a lengthy encounter.

It happened on Tuesday, when the epic quarter-final clash between Rafael Nadal and Novak Djokovic finished around 1.15am. A few fans had actually left the court Philippe Chatrier before the end of the contest to catch the last metro.

The game was the ninth men’s match out of the 10 scheduled as a night session, raising more questions about how women have been getting the short end of the stick at major tournaments.

In France, Amazon have the exclusive broadcasting rights for that match through their Prime Video platform in a deal reported to be worth €15 million euros ($22 million) while public broadcaster France Television is reported to have paid €10 million.

“In this era that we are in right now, I don’t feel, and as a woman, former women’s player, I don’t feel bad or unfair saying that right now you have more attraction, more attractivity - can you say that? Appeal? - that’s the general, for the men’s matches,” former two-time grand slam champion Mauresmo said. 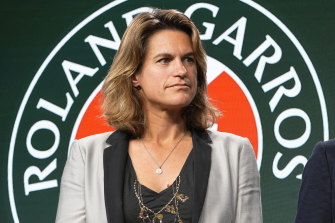 Tournament director Amelie Mauresmo has come under fire for scheduling in favour of men.Credit:AP

World No.1 Iga Swiatek, who has not played a night session match, said she was disappointed with Mauresmo’s remark.

“It is a little bit disappointing and surprising because she was also in WTA,” the 2020 champion told reporters.

“I think women’s tennis has a lot of advantages. And some may say that it’s unpredictable and girls are not consistent.

“But on the other hand it may also be something that is really appealing, and it may really attract more people. So it depends on personal views.” 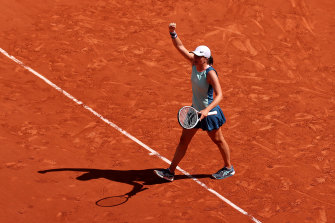 The governing body of women’s tennis, the WTA, asked for improvements in tournament scheduling.

“Our fans want to see the excitement and thrill of women’s tennis on the biggest stages and in the premium time slots,” it said in a statement to Reuters.

“There is certainly room for improvement and if we want to build the value of our combined product, then a balanced match schedule is critical in providing that pathway.”

In all four majors, women also traditionally kick off the day on the main showcourts at 11am - when TV audiences are at their lowest and most spectators are still making their way into the stadium.

It has happened 18 times out of 20 at this year’s French Open.

Wimbledon is the only grand slam tournament without matches scheduled to start at night, while at the US and Australian Opens, a full evening program allows women to get their share of the limelight.

Asked about the scheduling of the night session, Mauresmo told reporters that it would have been “difficult” to put only women’s players on the schedule for spectators with a single ticket for the evening only.

“This is what we wanted to showcase to spectators who had only one-match tickets, because some of them do,” she said.

“It was more difficult to have, of course, a match, a night-session match with only female tennis players.”

Watch every match from Roland Garros ad-free, live & on demand on Stan Sport, with courts streaming in 4K UHD. Coverage of select matches commences on 9GEM from 6.30pm AEST each night.