Harry Grant will undergo knee surgery on Friday and be sidelined for a month in a huge blow to the Wests Tigers and his own Dally M hopes.

The rookie hooker and the Tigers remained unsure of the exact moment he tore part of his meniscus in his knee during last Friday's loss to the New Zealand Warriors. 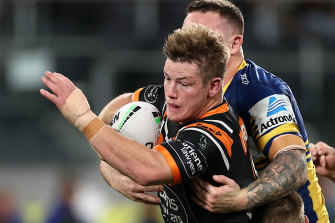 Harry Grant will undergo knee surgery Friday and be sidelined a month.Credit:Getty Images

The injury setback has forced the Tigers to turn to Moses Mbye, who trained all summer at dummy-half and will wear the No. 9 against Newcastle on Saturday, while Maguire also confirmed Jacob Liddle would be ready to be seriously considered for selection next week after overcoming a ruptured ACL.

Grant, on loan from Melbourne, topped the Dally M leaderboard before voting went behind closed doors and could return for the round-17 clash against Manly, or five days later on a Thursday night against Souths.

The Dally M race looks Clint Gutherson's to lose now Grant is sidelined and another front-runner, Cameron Smith, is expected to miss a couple of weeks before returning from a shoulder injury against Gutherson's Eels. 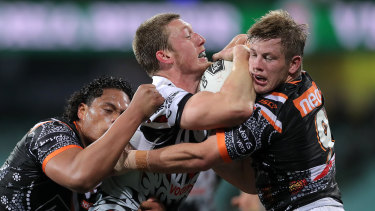 Harry Grant (right) can't pinpoint the moment against the Warriors he suffered a knee injury.Credit:Getty Images

"We've been told four to six weeks with Harry, but the surgeon has told us it will be about four weeks,'' Maguire said.

"He's got a little nick on his meniscus and they're going to get in and tidy that up on Friday morning.

"Being his first year and the way he puts his body on the line, a little freshen-up will do him wonders.

"Harry is a loss but it's also about your club having depth and getting through these periods. 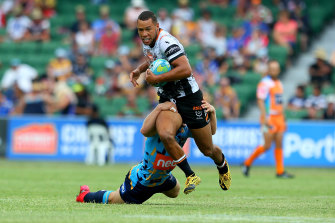 "Moses Mbye played in a Grand Final at hooker. He spent plenty of time there in the off-season, he's very capable and we talked about utilising him there so we could carry four forwards on the bench.

"This weekend has also allowed us to put Tommy Talau into the centres and let us bring in Asu Kepaoa.''

Liddle, 23, has had a shocking run with injuries and could have played against Newcastle, who have their own No. 9 problems. Kurt Mann is the latest hooker to start at the Knights.

"Jacob has been training really strongly the last couple of weeks, he's back in contention for selection and could have played this week, I was tempted, but he's been out all year and just needed another week's worth of solid training.''

The Tigers were stunned by the Warriors and will be looking to kickstart their finals hunt against a Newcastle team desperate to get back into the winner's circle themselves.

Blake Green plays his first game for Newcastle after signing a deal at the start of the week, while Chris Lawrence plays his 250th NRL game, and Benji Marshall his 250th in Tigers' colours.

Maguire was linked to a move to North Queensland at the start of the week, but was never interested. "I want to win a comp here at the Wests Tigers, he told the Herald.''

Tottenham are not selling Mourinho's merch - because Chelsea still own the trademark rights. But it didn't stop Manchester United
Shomurodov is close to moving from Rostov to Genoa for 8 million euros (Sport Italia)
Pobegalov about 12 cases of covid in Shinnik: I hope we can start training by October 4
Kulchiy is likely to become an acting coach of Dynamo. They want to keep Novikov in the club's system
Due to covid, the Premier League season may be considered prematurely completed if the 2/3 and 3/4 rounds are completed
Bayern could give Nübel a loan deal if Ulreich stays at the club
Former Italy striker Pazzini is Interested in Spezia. He is 36
Source https://www.smh.com.au/sport/nrl/freshen-up-will-do-harry-wonders-maguire-says-grant-back-in-month-20200806-p55j8m.html?ref=rss&utm_medium=rss&utm_source=rss_feed