From the Archives, 1942: Sea raiders shell Sydney and Newcastle

Sydney and Newcastle were shelled from the sea early this morning - probably by submarines. In Sydney the bombardment began about 12.5 a.m. An air-raid alert was sounded shortly before 12.30 a.m. and the “all-clear” was sounded at 1.11 a.m. 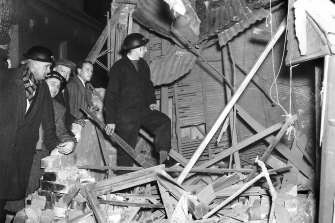 NES workers stand in the remains of the kitchen and laundry of a Bellevue Hill house, which had received a direct hit on June 8, 1942.Credit:Staff photographer

In Newcastle, the shelling began about 1.30 a.m. and lasted about 35 minutes. Two shells exploded but did no damage.

At least five shells fell in Sydney suburbs and others are believed to have fallen in the harbour. As far as is known, only two exploded. A “dud” shell tore through a block of flats in Manion Avenue, Woollahra, and one man
was injured.

Thousands of people in eastern suburbs were aroused from their sleep by the scream of shells passing overhead and by the boom of coastal defence guns opening fire. The sound of the shells from the sea was heard in many suburbs, but it seemed loudest in Bondi, Bellevue Hill, Rose Bay, Bronte, Coogee, and Randwick. It was estimated that at least 12 shells were fired.

Many persons said that the firing appeared to be coming from the sea about two miles off the coast. Some watchers on the coast saw what they took to be gun-flashes. The flashes from coastal defences were very vivid and were seen in the far inland suburbs.

Long before the alarm went, householders rushed to their shelters. In the seaside suburbs many people mistook the shells for bombs coming from aeroplanes. No planes, however, were reported over Sydney, and the alarm was sounded merely as a precaution.

Flare shells appeared in the sky over Newcastle before the explosions began. The city was blacked out, but the alert was not sounded.

The Minister For National Emergency Services, Mr. Heffron, was roused from his bed soon after midnight to receive reports. The N.E.S. staff in the eastern suburbs ran to their posts immediately they heard the shells. Wardens’ posts all over the city and suburbs were manned within a few minutes of the alarm being sounded.

In King’s Cross people made for the open streets and stood in eager groups listening to the thunder of the coastal guns and watching the flashes. There was no panic, though many listened intently, fearing that the explosions were caused by bombs and that they would hear the drone of planes overhead.

Immediately the sirens sounded the lights of Sydney flickered out in a few seconds. Up to this stage, thousands of people all over the city had been merely passive watchers of the gun flashes, which had lit up the sky far to the west of the coastal zone.

The sudden quiet darkening of all lights, however, sent them back to their homes, groping for matches and screened torches to enable them to get to their shelters. A moment later they heard the wail of the sirens. 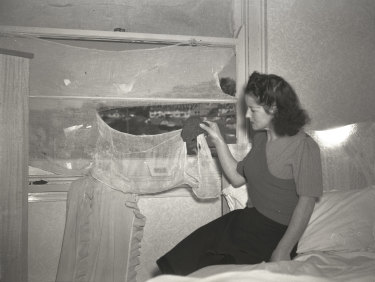 “Blast from a shell hurled asphalt from the roadway through windows at the home of Mrs E. Moore. She was slightly cut by flying glass.”Credit:F.J. Halmarick

SHELL TORE THROUGH WALL ABOVE BED

Only a miracle saved the lives of Mr. E. Hirsch, 35, and his elderly mother when a shell penetrated their rooms in Grantham Flats, Manion Avenue, Rose Bay. Their flat is on the top floor of the building, which is of three storeys.

Mrs. Hirsch was sleeping in a bed-room on the south-west corner of the building when a dud shell, believed to be of 5.9-inch calibre hit the outer wall below the guttering.

lt tore a hole through the two brick thicknesses above the head of Mrs. Hirsch’s bed, skidded along the wall flanking her bed, bursting the bricks through in a large gash, but not penetrating to the next room, then pierced the third wall of Mrs. Hirsch’s room below the end of her bed, tore through the two walls flanking a hall and finished up on a staircase between the first and second floors.

Mrs. Hirsch was showered with bricks. Her bed was broken by the falling debris. She herself escaped unscathed.

Her son, however, who was sleeping in the sitting-room, the wall of which was burst through, was hit by bricks, and received injuries which are believed to be slight. He calmly smoked a cigarette as ambulance men took him to St Vincent’s Hospital.

His wife and their 18-months-old baby son were asleep in another room but they and a young woman who was staying with them were not injured.

In its passage the shell, which was on a fairly flat trajectory, was first deflected downwards, but after penetrating Mrs. Hirsch’s room, it seemed to have been deflected upward at an angle of 45deg before penetrating the
fourth wall.

The first hole was about one foot in diameter, but the break in the wall which it burst was fully five feet across.

The room measured about 14ft by 10ft and about 9ft 6in high. Bricks and plaster were littered everywhere.

The dud shell lay on the staircase for a time. Then an air-raid warden carried it into a nearby street. A little later it was removed to Woollahra Park oval and buried, but was later taken from there for inspection.

Mr. Hirsch five years ago came from Germany, a refugee from the Nazi tyranny. He is an electrical engineer by profession.

“A direct hit destroyed the rear part of this home in the eastern suburbs, but the occupants, inspecting the twisted wreckage when daylight came, remained cheerful”Credit:F.J. Halmarick

Mrs.E. Hirsch said she was sleeping in a sun-room beyond the sitting-room in which her husband was asleep. She was wakened by the sound of gunfire.

“I saw a lot of white clouds of dust, and heard a roar.” she said. “I saw the bricks falling, and seized the baby and passed him to Miss M. Lanham, who was staying with us. I saw my husband under a pile of debris, and
rushed downstairs and summoned Mr. Woodward.

“When the ambulance came, I went with my husband to the hospital. He did not appear to be badly hurt. We are all very upset, but the baby has gone to sleep again, and I am going to try to sleep among the ruins.”

Miss Lanham, who was sleeping in a room about 10 feet away from the spot where the shell struck, said she was wakened by detonations.

“I heard some whistling sounds overhead,” she said. “I tried to be calm and tell myself it was only practice. Then I felt the building shake and saw smoke and debris.

“I took the baby and went out to a shelter room. I felt very nervous as I passed the shell on the stairs on my way down.

“After I had seen Mr. Hirsch into the ambulance, I went to a friend’s place nearby. After about two and a half hours I came back and will try to sleep here. But it will be difficult.”

Mrs. Hirsch sen. was taken to a friend’s home soon after the shell passed through the flat.

There are three wardens in the block of flats in which 17 people live, five of them children. Five of the nine flats are occupied.

The wardens - Messrs. H.R.Wood-ward, W.R.Clarkson, and J.L. Isley - were on duty within a few seconds. They had the injured man carried out of the flat before the sirens sounded and notified N.E.S. headquarters.

There was no sign of panic in the building at any stage.

Mr Ilsley said that he was wakened by the sound of firing and was looking out of a window when the shell struck the building.

Mrs. Clarkson said: “I was wakened by the first shot and looked out the first floor window and found that the rest of the occupants of the flat building were awake.

“I was looking out the window when I heard a loud swish and a bang. Pieces of brick from the wall hit me. I then took my two children to a room we had specially prepared for air raids.”

Barbara Woodward, aged 10, said, “Mummy fell down, and I was frightened; I heard a bang in the roof and grabbed my kitten, ‘Mr. Churchill,’ and went with the other children to a room at the back of the flat. ‘Mr. Churchill’ was not frightened.”

Private E.G.Ferris, of the Labour Corps, another occupant of the flats, said he was awakened by the thump of the shell hitting the building.

“I did not worry much, as I was shelled plenty of times in the last war,” he said. “I rushed into some clothes, and was going upstairs to see if I could help. I arrived on the landing in time to help carry Mr. Hirsch down.”