During the war the building was occupied by the Ministry of Munitions. 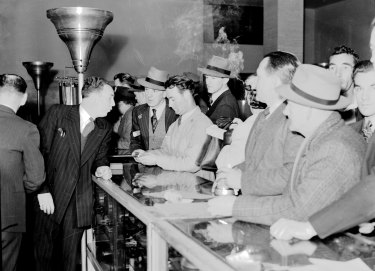 Buyers found supplies of scarce goods waiting for them when the doors were opened, and the store was crowded all day.

RE-OPENING PARTY
(August 5)
The Premier, Mr McKell, and Mrs McKell, Miss Elizabeth Northcott, and Captain A. D. Findlay, A.D.C. to the Governor, Lieuti-General Northcott, were among the guests at an informal late afternoon party given yesterday by Mr. and Mrs. Charles Lloyd Jones at David Jones' Market Street store. 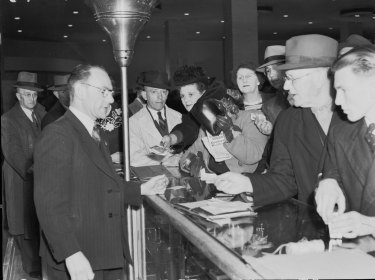 The Market Street store, which will reopen this morning, was closed for 3½ years when it was used by the Department of Munitions.

In November 1942 the Herald had published the following story:

David Jones's Market Street store has been taken over by the Ministry of Munitions. It will be occupied shortly.

Having been informed recently that the Ministry of Munitions was in urgent need of accommodation in which to carry out its rapidly-growing administrative functions, David Jones Ltd. had agreed, at the instance of the Commonwealth Government, to make the store available, said Mr. Charles Lloyd Jones yesterday.

"Arrangements will shortly be put in hand for the transfer of the Ministry to its new location." he said. "This in turn will involve the moving from the Market street store of several important sections of the firm's business. In this building the company does a turnover of £1,300,000, and to give it up will mean a great sacrifice.

"Here we have put our sections that serve the public-our mail order department, our office, men's sections, Davy Jones's Locker, china, glassware, and cutlery. All these have now to give way to the needs of the Department of Munitions."

Barcelona's Interest in Isak Increased after Koeman's appointment. Larsson has a high opinion of the player (Mundo Seportivo)
Manuel Pellegrini: When you play against Real Madrid and var, it's too much
PSV and Porto are Interested in Barcelona midfielder PUC. He doesn't want to leave the club
Puyol about Barcelona: If we want to win the championship, we need to perform very well
Schalke sacked Wagner. The team has not won the Bundesliga since January
Iacini on 3:4 with Inter: Even a draw would be an unfair result, given how many chances Fiorentina created
Ramos Pro 3:2 with Betis: the Referee tried his best and didn't do anything intentionally
Source https://www.smh.com.au/national/nsw/from-the-archives-1946-rush-for-luxury-items-as-city-store-re-opens-20200727-p55fwo.html?ref=rss&utm_medium=rss&utm_source=rss_national