King O'Malley, at 99, Recalls the Past 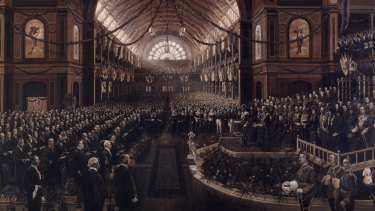 But the celebrations really started yesterday when Mr and Mrs. O'Malley entertained friends who "dropped in" on them throughout the day.

When I called yesterday, Mrs. O'Malley led me into the sitting room where I found the veteran statesman seated in a deep armchair by the fire chatting with friends.

Mr. O’Malley rose as his wife introduced me. "How are you, brother," he said as he led me to the armchair he had just left. "Now you sit here.”

I took another chair while Mr. O'Malley resumed the armchair and began to recall some of the highlights of his political career.

He spoke quietly, with a sense of keen enjoyment, but at times a touch of fire crept into his voice as he spoke of political battles of the past. 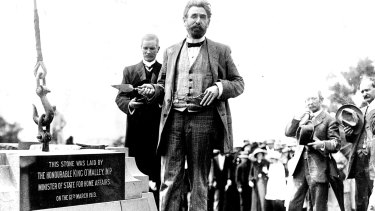 King O'Malley lays the third stone of the Commencement Column, a monument to designate the official foundation of the national capital and its naming as Canberra, 1913.Credit:The Age Archives

"What's Mr. Menzies trying to do with the Commonwealth Bank now, do you know?" he asked me.

“You know, this is the room where the Commonwealth Bank was born.” His arm took in the scope of the little room, with its shelves of Hansard, its framed political cartoons on the walls, its friendly warmth.

“There is the desk where I worked out the details of the bank.

“The people don’t realise even yet that they themselves own the bank.

“I’m a shareholder, and so are you – so are we all. We don’t need nationalisation of banking here – we already have the people’s bank.”

One of the guests was leaving. “Now keep of the stagger juice King,” he said.

“Stagger juice! Never touched it in my life,” Mr. O’Malley said warmly. “I don’t believe anyone from Ireland, whether he’s from the north or south, should touch strong drink.

Mr. O'Malley smiled when he spoke of the construction of the Trans-Australia railroad. 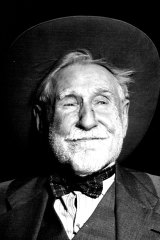 “I got the idea to build that from Abe Lincoln,” he said. "Lincoln started using the note issue during the civil war and that's how we financed the railway."

Mr. O'Malley sees in Australia today a country with boundless prospects for the future.

“It is the climate here,” he explained. ''The best climate in the world.

“When I came, here as a young man from Canada, I came here to die, with tubercular trouble. But the sun cured it.

Mr. O'Malley seemed a little surprised at the present prosperity of working people.

"I hear people passing my house and pointing it out to others: ‘That’s where King O’Malley lives,’ they say ‘Why, we’ve got better houses than that.’ Just working men, too.”

One of the visitors was Mr. Lenard Dooling, Chief State Officer for Victoria of the Commonwealth Bank.

The bank had sent a birthday cake - with one large candle to signify one year under the century - which was on the table together with four other birthday cakes Mr. O’Malley had received.

On the table also were some of the many telegrams of congratulations Mr. O'Malley received from all parts of Australia and from overseas. Included among them was one from the Acting Premier (Mr. Gavin).

As the guests left Mr. O'Malley called to each: "Goodbye, brother, thanks for calling.” 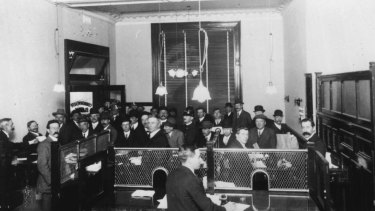 Ødegård prematurely returned to the real world of rental Sociedade
Arsenal and Roma are discussing the exchange of Torreira for diavar
The trained bear was brought to the dressing room of the Sakhalin Resident
De Ligt had shoulder surgery and will miss 3 months
Modibo – infected with coronavirus Barcelona player. The disease passes without symptoms
Lichtsteiner finished his career. The former Juve and Arsenal defender is 36 years old
Matuidi left Juventus. The midfielder will move to Inter Miami Beckham
Source https://www.theage.com.au/politics/federal/from-the-archives-1953-king-o-malley-last-link-to-history-20200626-p556p6.html?ref=rss&utm_medium=rss&utm_source=rss_feed