By Lindsay Simpson and Staff reporters

The western suburbs of Sydney bore the brunt of floods yesterday which saw the evacuation of up to 1,500 people from homes in low lying areas along the Hawkesbury River. The river was expected to rise by a further three metres during the night. 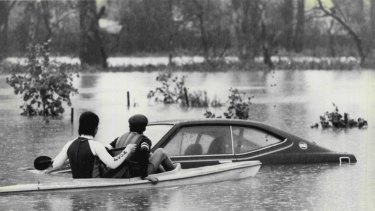 One ship was reported to be in difficulty because of the storm on the South Coast last night, and gale force winds and very rough seas were expected overnight. The Weather Bureau issued a strong wind warning for the whole of the NSW coast.

The Sydney deluge has claimed the lives of at least five people. Mr Brian Griffiths, 35, the captain of the Lithgow Volunteer Rescue Association, is still missing in floodwaters. A two-day search has failed to find him.

The NRMA estimates flood damage will cost insurance companies more than $100 million. The Cabinet natural disasters committee will meet today to consider the size of Government relief for flood victims. 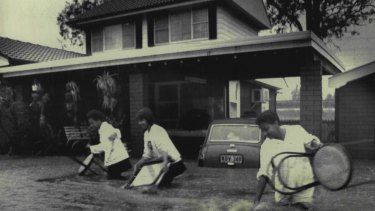 "The natural disasters committee will consider the scope of cash assistance for hardship cases," the Premier, Mr Unsworth, said after a helicopter trip over the western a suburbs.

"These grants will allow the replacement of personal effects and essential household items, as well as s repairs necessary to restore homes to a safe and habitable condition,

"The cash assistance is not designed to provide compensation for losses, but to give a measure of a relief where flooding has caused I distress."

Late yesterday victims of some of the worst-hit areas were told to expect long delays in having blocked and overflowing sewers treated because of bans by Water Board workers.

A Water Board spokesman said there was a backlog of 300 service calls for blockages and overflows, and that backlog was growing. The worst affected area was north-west of Parramatta and up to the Blue Mountains. 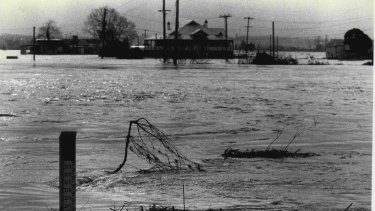 A flood level indicator at the Windsor Bridge and a building in the middle of the Hawkesbury River surrounded by raging flood waters, August 7, 1986. Credit:John Nobley

He said a quarter of the repair gangs were working, and some gangs had disobeyed union directions to do so. In an urgent hearing yesterday, the deputy president of the Industrial Commission, Mr Peter McMahon, ordered the union to lift all bans and set grounds for both parties to negotiate on five issues in dispute.

The Water Board said the back-log will be greatly reduced today if the union follows the commission's directions.

Many people were unable to get to work yesterday and many court cases were cancelled because witnesses and even judges were stranded.

The State Rail Authority experienced delays and disruptions. Passengers on the Illawarra line wanting to travel to the Eastern Suburbs had to change at Town Hall after the line was closed until noon because of water in tunnels.

A mud-slide, which blocked the Blue Mountains line at Blackheath, will not be cleared until today. The waiting period for taxis was up to three hours. Almost 120 evacuees whose homes were in the middle of the floods in the south-west rested last night, many in deep shock, in emergency service hostels at Cabramatta and Fairfield.

Conte on 4:3 with Fiorentina: impressed with Inter's attack. We didn't have enough balance, we paid for it
Zidane about 3:2 with Betis: real can get better and will. A difficult game, but we believed in winning until the end
Dest said goodbye to the Ajax players and will fly to Barcelona today (Gerard Romero)
Vidal made his debut for Inter in the match against Fiorentina
Barcelona will only consider Zinchenko if Firpo leaves
The referee after VAR for a foul on Jovic removed defender Betis Emerson
Lampard replaced Kepu, but got 0-3 from West Brom in the first half. Then Chelsea got together and gave a comeback of the weekend: only the pupils scored
Source https://www.smh.com.au/national/nsw/from-the-archives-1986-sydney-drenched-wettest-24-hours-on-record-20200729-p55gis.html?ref=rss&utm_medium=rss&utm_source=rss_feed