Gawn ‘embarrassed’ by Demons’ restaurant fight, as Melksham has surgery

Melbourne captain Max Gawn says he is “embarrassed” by the drunken restaurant scuffle which has left Steven May and Jake Melksham ashamed, and the Demons down a key player as they aim to break a mid-season funk.

As it was revealed Melksham has undergone surgery on his hand from an injury sustained in the Sunday night altercation, a forthright Gawn condemned the pair’s fight as “horrible” and “unacceptable” and issued a public apology to the Entrecote eatery.

Insisting the wheels had not fallen off the club’s premiership defence, Gawn said reports that May had sledged Melksham about missing the grand final were untrue but admitted the “hurtful” remarks had crossed the line of acceptable banter.

“The grand final one is completely false and I do want to get that out there because that looks bad on characters,” Gawn said. “That wasn’t said and I’m pretty comfortable and trust those two boys that that wasn’t said.”

Gawn said he had rebuked the other players present at the dinner for not calling out May for breaking team rules by drinking while under concussion protocols.

The Dees are top of the ladder after 12 rounds but losses to Fremantle and Sydney, followed by an alcohol-fuelled public bust-up between two senior players, have rocked the reigning premiers.
The incident has marred the build-up to one of the cherished matches on the sporting calendar, the Queen’s Birthday Big Freeze game in honour of football great Neale Daniher, whose Fight MND charity is raising awareness of motor neurone disease. 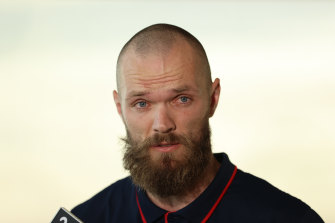 Gawn said it was “flattening” to be told by Melksham and May of their involvement in the bust-up on Monday morning.

“I think it’s just a bad example, definitely,” Gawn said. “And those two boys are very remorseful in what they did and what they were able to do at Entrecote but in the end violence is not the answer, violence is never the answer.”

May has been handed a one-game ban by the Demons for drinking while under concussion protocols, and he and Melksham must complete community service.

Gawn said teammates at dinner should have challenged May for consuming alcohol in breach of team rules.

“That’s certainly disappointing,” Gawn said. “That there was a group of six or seven there. And Stephen was drinking with them and I’ve spoken to all parties involved and especially the five guys outside of Steve and Jake. And I express my disappointment.

“Obviously, it’s a difficult situation and anytime the guy’s one of the older leaders of the football club, but we expect our young guys to be able to lead as well and that really was disappointing.

“And we expect Steve to be able to make the decisions himself at the age he’s in and the experience that he’s had so it was disappointing.”

Gawn defended the Demons’ decision not to suspend Melksham for his role in the fight, saying community service was an appropriate response.

“Community service is something that can give back to the community,” Gawn said. “A one-week match penalty we didn’t think was suitable for the act that happened.

Though top of the ladder after 12 rounds, the Dees’ premiership defence is in rough waters after back-to-back defeats and the fallout from the restaurant blue.

“The wheels haven’t fallen off. I’m completely comfortable with where we are from a performance point of view,” Gawn said.

The AFL’s integrity department has been liaising with Melbourne and is satisfied with how the club has handled the aftermath.

While May said he and Melksham were still mates, Gawn said it would take time for the pair’s friendship to heal.

“It’s one of the great arts and leadership and I’m really excited about the challenge,” Gawn said. “I’m not gonna lie, I’ve been embarrassed the last few days.

“I’ve got no doubt that Melky and Maysy have worked it out and are working it out, but it’s probably not an overnight thing. They had an altercation that probably will go on for a couple of weeks making sure that they mend that friendship.”

Melksham required surgery after his hand became infected following his fight with May. 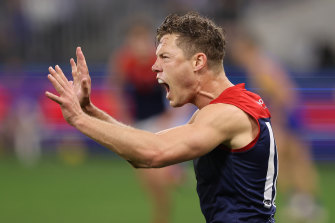 Jake Melksham requires surgery on his hand after his physical altercation with teammate Steven May.Credit:Getty Images

The Demons confirmed he will be unavailable for selection in the VFL and said the club was embarrassed about Sunday night’s incident.

Football manager Alan Richardson said it was disappointing in a Melbourne statement on Wednesday morning.

“Jake performed really strongly at VFL level last weekend and it’s disappointing to not have him available for selection this week,” Richardson said.

“What is more disappointing is that the injury keeping him out of the frame for selection is a result of the altercation Jake was involved in on Sunday evening.

“As a footy club we are deeply embarrassed by the events of Sunday and Jake and Steven understand that they have let our club, their teammates and our members down.

“I want to make it very clear that as a club, we do not condone violence of any manner, and the fact that our players allowed any disagreement to escalate to a physical level is completely unacceptable.”