Hawthorn had to restore some pride in their game after a bad performance against Geelong last week, Hawks coach Alistair Clarkson said after his team's emphatic win over reigning premiers Richmond on Thursday night. 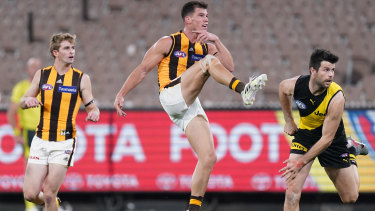 Hawthorn's Jaeger O’Meara had a brilliant return from injury against Richmond.Credit:AAP

Clarkson said Hawthorn had made the Cats look better than they were after Geelong thumped the Hawks by 61 points.

"It was a tough week because we were so disappointed with our performance. We have got a proud group and a proud club and we lowered our colours to a good side last week," Clarkson said.

"I hope I am not discrediting Geelong by saying that but they are not that good. We were just terribly poor and we expected a response and we got one. But the challenge for us now is to back up that response with another really strong performance against the Kangaroos next week.

"It's hard to keep a team down for along long period of time. We didn't have enough resolve in the game last week but there was resolve there tonight."

Clarkson had been highly critical of his midfield last week, but they responded with improved effort around the ball, and the inclusion of Jaeger O'Meara.

"We are pleased with our effort right across the ground whether it was around the contest or forward or back, we competed in the air and at ground level and made it difficult for Richmond to move the ball as well as they usually do," Clarkson said. 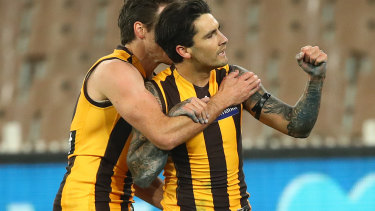 "It's only the last quarter when we fatigued a bit and couldn't sustain that manic pressure but that is the hard part of the game you have got to do it for the whole four quarters.

"The first three quarters we caused Richmond enough concern they couldn't get their forward ball movement going to score as freely as they usually do."

Clarkson said the long lay off between round one and round two had taken the competitive edge off his players and they were vastly improved and ready on Thursday night at the MCG more than they had been last Friday night in Geelong.

"You saw a different Hawthorn side tonight, you saw intent, resolve, resilience in tackle, resilience when we were challenged because Richmond will always come at you. We were just so much better prepared for the contest," he said.

He said the wider MCG compared to Kardinia Park last week was not a significant factor.

"I don't think footy has got much to do with ovals and that stuff it has got to do with competitive instinct and I might seem like I am harping on it but we had it tonight and we didn't win last week, if you have got it you will win on any shaped ground."

Pep Guardiola: I would have stayed at Manchester City and in League 2
Manchester United is ready to sell Alexis, Lingard, Smalling, Dalot, Jones and Rojo
Frank Lampard: I expect more from Chelsea, but now the result is most important
Atalanta does not lose 15 matches in a row – 13 wins and 2 draws
Lorient threw one newcomer off a plane and sent another under the water-all for the sake of presentations on social networks
Pasalic scored a hat-trick in the match against Brescia. Atalanta smashes the opponent 6:1
Rummenigge on Ribery: Hennessy was like a second father to him, and I was like a second mother
Source https://www.smh.com.au/sport/afl/geelong-aren-t-that-good-hawks-were-just-poor-alistair-clarkson-20200618-p55440.html?ref=rss&utm_medium=rss&utm_source=rss_feed

Okunbor wants back in at Belmore as Harawira-Naera considers options

Your Daily Horoscope for Wednesday, July 15

ASIC kept out of the loop on litigation funder regulation

A governor-general's life is 'certainly not dull'

The emotional impact of Lockdown 2.0

Work from home in style

Politicians caused confusion now they have to sort it out

From the Archives, 1956: The Ampol Trial

Search on to fill key role as council exec departs

‘Play by the rules’: Pubs’ virus plea to patrons

Local groms ready to rip in as serious surfing is back

A very Canberra War of the Roses

Thousands of healthcare workers poised to help in COVID-19 fight

Doctor charged with grooming and sexual assault of girl

How to future-proof your super from the next market meltdown

US carries out the first federal execution in nearly two decades

Why are teachers again on the virus front line?