Australia's biggest employers have adopted a go-slow policy to returning workers to their city offices despite the pleas of CBD retail and hospitality businesses, whose customers deserted them at the beginning of the coronavirus pandemic in March.

From Monday, state government rules allow 25 per cent of private sector workers back into their offices, but the return will come at a trickle as companies including Westpac, Jetstar, BHP, Telstra, Treasury Wine Estates and Coca-Cola Amatil leave much of the decision-making to individual staff. 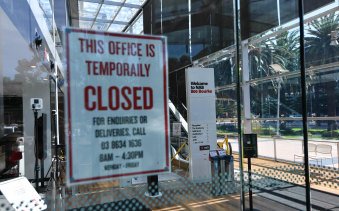 Staff will begin to return to NAB's near-empty offices from Monday.Credit:Joe Armao

The government, whose public service is the largest single employer of workers in the city, is taking an ultra-cautious approach with no announced plans to return to offices.

COVID-19 has battered the CBD economy, with the City of Melbourne estimating 28 per cent of businesses there are either vacant or remain closed even after the lifting of restrictions. But businesses are indicating that any significant return of workers is likely to come well after the summer break, and possibly as late as February or March.

The Age surveyed 22 major employers with tens of thousands of employees in CBD offices. The majority said it would be up to staff to decide whether to return.

NAB, which has 16,000 staff across its Docklands offices in three large Bourke Street addresses, is typical in moving to a "hybrid model that balances working from both the home and our commercial buildings," a spokesperson said.

"This will not be a return to how things were previously".

A Westpac spokesperson said the company was "planning to return people slowly as teams work through the best approach, rather than having a mandatory 25 per cent of our Melbourne workforce back in the office before Christmas".

And Employment Minister Jaala Pulford said there were no immediate plans to bring public servants back to office towers.

"As you will appreciate, our approach – based on public health advice on reopening – has always been cautious and safe. And so that is what is dictating the rate of resumption and return to different types of workplaces and different types of industries," Ms Pulford said.

Caution is also clear from companies including Medibank, ANZ, JB-HiFi and Bunnings, which are delaying the return process until next year.

"We are keeping the commitment we made to our people in September and will begin returning to the office in the new year, likely late January or early February," an ANZ spokesperson said.

Commonwealth Bank's work from home directive for non-essential workers could continue for several months in Melbourne, with the bank's Sydney CBD office still at 50 per cent capacity due to social distancing requirements, despite the absence of a second wave of infections in NSW.

"We’re currently working through what the 25 per cent capacity limits for our buildings might look like and will manage a gradual return, taking into account our people’s personal situation and preferences, what will work for the team and for the business," a bank spokesperson said.

The City of Melbourne – Australia's local government area hit hardest by the COVID recession – has been pushing for a faster return to offices.

It has secured the agreement of 10 of the city's major employers, including NAB, ANZ and Telstra, to sign a so-called "CEO Pledge", vowing to bring back at least 70 per cent of their workforces once they are permitted by government to do so.

Consulting giant PwC has predicted the CBD and surrounding suburbs will lose 79,000 jobs annually – and bleed more than $110 billion in revenue – over the next five years due to the lingering effects of the COVID-19 recession.

Since March, 13.2 per cent of jobs have been wiped out in the CBD and surrounding suburbs, according to the Australian Bureau of Statistics.

Roy Morgan research released on Friday showed movement in Melbourne's CBD during mid-November averaged 27 per cent of pre-COVID-19 levels in January and February. The data was collated by tracking mobile phone data of pedestrians, cyclists and motorists.

Ernst & Young HR team leader Ayrton Costanzo can’t wait to get his team back together in person on Monday. 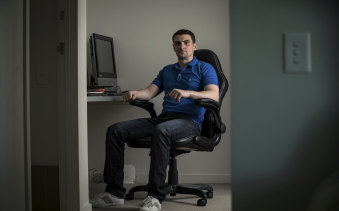 Ayrton Costanzo, who has been working from home since March, cannot wait to get back to the office.Credit:Darrian Traynor

He has worked from his Melbourne apartment since March and has had to work hard to separate his home life from work.

"The only downside about [working from home] is your home becomes your office,” Mr Costanzo said.

Mr Costanzo said his junior team members especially were looking forward to returning to the office.

"They’re excited to be able to socialise again, to have that face-to-face interaction," he said. "Just being able to be on the same floor with the team is going to be enough."

For those employees returning, the office environment will be very different.

Treasury Wine Estates employees will wear facemasks in the office and when using public transport, and the alcohol company will maintain daily office attendance records to ensure it meets the 1.5 metre space requirement.

NAB and Tabcorp are both implementing desk booking systems while Dexus is providing a car parking allowance to its employees because of concerns about using public transport.

Lord mayor Sally Capp said while the ultimate aim was the full return of workers, the return from Monday of up to 25 per cent of companies' workforces would act as a trial run for coming months

"Let's test those systems, make sure they work well, and build up that confidence that, what we have been planning for months now, actually does work effectively," she said.

"If we can do that well in this first stage, which is a 25 per cent return, we know that there'll be more confidence on both sides, government and workers, to see those numbers increase in due course."

Kramaric scored the 74th goal in the Bundesliga, breaking Olic's record among Croats
Suarez has 12 goals in his first 15 games for Atletico - the best start in La Liga for a new club since Ronaldo
16-year-old Small - the youngest player in the history of Everton
Solskjaer on 3-2 with Liverpool: Manchester United won on their own terms. It's a good feeling
Hames scored 10 (3+7) points in Everton's home matches. Away - 0
Suarez scored his 12th goal of the La Liga season. Messi has 11
Miller on the Manchester United defeat: Devastated. There is no second chance in knockout football
Source https://www.theage.com.au/politics/victoria/go-slow-major-employers-in-no-rush-to-return-to-the-office-20201127-p56ig2.html?ref=rss&utm_medium=rss&utm_source=rss_feed

JoJo Siwa opens up about being part of LGBTQI community: ‘I am just so happy’

Warnings as mercury rises across Victoria

Apple to produce niche, expensive VR headset before moving on to AR

Why now is the time to buy this SUV

Your Daily Horoscope for Monday, January 25

Mind game helped me lose 24kg in a year

‘Challenging and dangerous’: Severe fire risk ahead after stifling night

Church buildings for sale at $15k

Plot thickens in tennis ‘photo of the year’

Teen star comes out to fans

Bills Fans Parade Through Buffalo Ahead of AFC Championship Game

Vaccines may not work as well on virus variants: UK Health Minister

Arrest made as 300 fireys battle through the night