GoFundMe has set itself up as judge, jury and executioner

GoFundMe’s abrupt shutdown of Israel Folau’s fundraising page yesterday for “violation of … terms of service” is a troubling development for his religious freedom case and has disturbing implications for freedom of speech.

Israel’s GoFundMe campaign has been highly criticised. Rugby Australia chief executive Raelene Castle and various media outlets have condemned Israel Folau for fundraising on a forum that, apparently, is only for kids with cancer. Apparently, his campaign opens a legal can of worms. Yet, GoFundMe continues to list 17,000-plus legal fund campaigns. 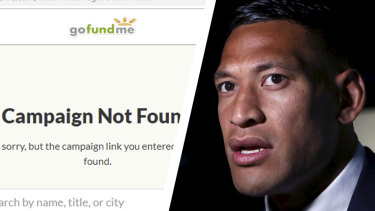 Israel Folau's controversial appeal for financial assistance for his legal fight has been shut down by GoFundMe Australia. Credit:AAP, GoFundMe

None of these campaigns attracted the hue and cry from Rugby Australia, the media and the other bien-pensants now pursuing Folau. Only his campaign has been pulled. This appears somewhat hypocritical unless Israel is somehow breaking GoFundMe’s rules for fundraising.

GoFundMe’s Terms and Conditions list 27 forbidden grounds for fundraising. It has been suggested that Israel’s campaign breaches ground 8, which bars campaigns for the legal defence of alleged crimes of hate or intolerance. There is no allegation that Israel has committed a crime, so this condition does not apply.

It appears that the only other ground GoFundMe can rely on is that Israel’s campaign comes under the catch-all condition 27 “any other activity that GoFundMe may deem in its sole discretion to be unacceptable”. Israel has breached no fundraising rules. Going by its media statement, GoFundMe has simply judged that Israel’s cause is unacceptable because apparently his case threatens values of inclusivity and promotes discrimination and exclusion. Yet Folau would dispute this characterisation and indeed wants these issues to be argued and decided by a court.

GoFundMe’s conduct should alarm all Australians interested in fair and equal access to justice. Anyone who wants to fundraise to have their day in an Australian court now has an extra barrier.

Our law firm, the Human Rights Law Alliance has assisted a variety of Australians who have stories similar to Folau – university students, doctors, teachers, taxi drivers, counsellors and many others who claim religious discrimination. These average Australians do not have the fame, wealth or public support of Folau. If they want justice, they face expensive legal fees, long and complex court proceedings, the uncertainty of potential appeals and ultimate responsibility for an opponent’s costs if unsuccessful. On top of that, GoFundMe has now placed another barrier in front of victims of religious discrimination who want to fund raise – a prejudgment from GoFundMe about whether they are bigots or not. Freedom of speech suffers if certain claimants’ legal claims are decided by a corporation before they can get to the courts.

GoFundMe could have let people choose not to give to Israel Folau, but instead it cancelled his campaign. This is wrong. The courts should judge Israel Folau’s claim, not GoFundMe unless it clearly sets out in its terms and conditions that it will be judge, jury and executioner of all issues of fairness, tolerance and diversity.

John Steenhof is the managing director of the Human Rights Law Alliance.

Maurizio Sarri: One day, Higuain needs to be pampered, the other-nailed to the wall
Captain Huesca's armbands-a textbook on the history and geography of Spain
Barcelona denied organizing attacks on its players in social networks
Rangnick will combine work of the head coach and technical Director in Milan
Veron-Messi: If you want to come to Estudiantes, the ten is yours!
World champion-1970 Tostao: Only a hybrid of Ronaldo and Messi can be compared to Pele
Diego Simeone: real get more penalties because of VAR, because they attack more
Source https://www.theage.com.au/sport/rugby-union/gofundme-has-set-itself-up-as-judge-jury-and-executioner-20190624-p520pe.html?ref=rss&utm_medium=rss&utm_source=rss_feed