Construction on the $709 million Broadbeach to Burleigh section of the Gold Coast light rail project could begin before Christmas.

Premier Annastacia Palaszczuk confirmed the successful tender was about to be announced, as she announced business case funding for the next leg, linking Burleigh to the Gold Coast Airport, on Thursday. 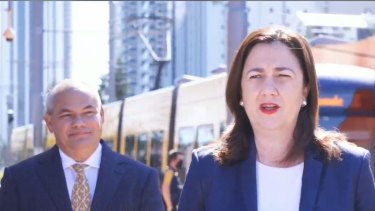 More than 50 million passengers have ridden the G:link since the first leg opened in July 2014.

Stage three, between Broadbeach and Burleigh, is funded by all three levels of government and the Queenland government has kicked in $2.5 million towards the $5 million business case for stage four.

“We’re nearly ready to award the contract to build the next stage of Gold Coast Light Rail from Broadbeach to Burleigh, creating 760 jobs,” Ms Palaszczuk said on the Gold Coast.

Already some buildings had been relocated, with power, water and gas utilities shifted and fences erected.

The Queensland government is contributing $351 million to the Broadbeach-Burleigh construction, the federal government has added $269 million and Gold Coast City Council is tipping in $91.5 million.

But plans are already in motion to extend the light rail link around the Burleigh Hill and down the Gold Coast Highway to Tugun and all the way to the airport at Coolangatta.

That money will be used to cost and evaluate a preferred route already chosen from a number of options examined by consultants Jacobs in March.

Cr Tate described having funding from the Queensland and federal governments for all stages as a “marquee moment.”

“Today is a significant achievement, to get a business plan for stage four of our light rail all the way to the airport at Coolangatta,” he said.

“I look forward to the consultancy and I would like to say ‘hats off’ to the Palaszczuk government for ensuring that this transport infrastructure is going to be a key element to keep our linear city moving.”

“This partnership funding means we can now start planning for the 13-kilometre corridor from Burleigh Heads to Coolangatta," she said.

Transport Minister Mark Bailey said although some had other views, the consultancy studies showed most residents wanted the light rail to run along the Gold Coast Highway to Tugun, near the Gold Coast Airport. 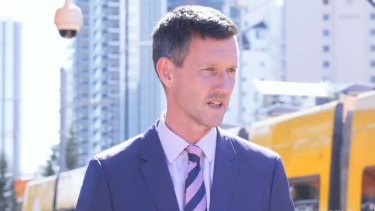 Transport Minister Mark Bailey on the Gold Coast where the Queensland Government announced $2.5 million for a $5 million business case for the fourth leg of the Gold Coast light rail project.Credit:Facebook.

"The survey revealed 58 per cent of respondents backed the light rail extension from Burleigh Heads to Tugun compared to 25 per cent who preferred bus lanes,” he said.

He said the work showed it was inefficient to send the light rail link west towards the M1.

On top of the $5 million for the business case, $2 million has been pledged towards studying additional bus routes to improve public transport running east to west across the Gold Coast.

Suarez arrives for Barcelona training despite talks with Atletico
Morata passes medical at Juventus
Simeone plays a key role in the transfer of Suarez to Atletico
The Agent Of Gareth Bale: In real Life, Gareth was treated differently. I hope there will be no question of a return
Micah Richards: People write: Richards only works live because of BLM. I achieved this through hard work
The former Director of Barca: Martino said Messi: I know that if you call the President, he will throw me out
Liverpool are in contact with Mbappe's entourage and will compete for him with Real Madrid next summer
Source https://www.smh.com.au/politics/queensland/gold-coast-light-rail-extension-works-could-start-by-christmas-20200806-p55j7k.html?ref=rss&utm_medium=rss&utm_source=rss_feed