Given Melbourne thinks of itself as Australia’s food capital, its double lockdown was particularly identity-shaking. Luckily, one of the city’s culinary leaders stood tirelessly tall and stayed relentlessly positive, shining a light through a dark winter. In March, Attica chef Ben Shewry allowed himself one day of self-pity before spray-painting “Never Give Up” on his dining room wall and regrouping. With partner Kylie Staddon, he launched a bakery and an at-home dinner business, keeping three dozen staff employed and even hiring workers from other restaurants.

Shewry’s pandemic projects went beyond saving his business. He launched the Attica Soup Project (with yours truly) to assist struggling international hospitality workers. He offered raw emotion, real talk and silliness on Instagram. In November, as Melbourne reopened (again), Shewry launched Attica In Between, turning his restaurant into a private dining room for 10 customers at a time, and built an Attica Summer Camp pop-up in the Yarra Valley.

Attica isn’t out of the woods. Its international profile means about one-fifth of its pre-pandemic customers were from overseas, and local diners may not fill the hole. But if creativity and determination are what matters, Attica will thrive.

“This year has been exceptionally painful for hospitality but while Ben Shewry has worn his pain on his sleeve, it’s been next to his heart the whole time,” says food identity Matt Preston. “Whether it’s his Soup Project or more frivolous ventures like his online ‘Party for Melbourne’, Ben Shewry has above all maintained the employment of his staff by pivoting with the grace of a pirouetting ballerina.” 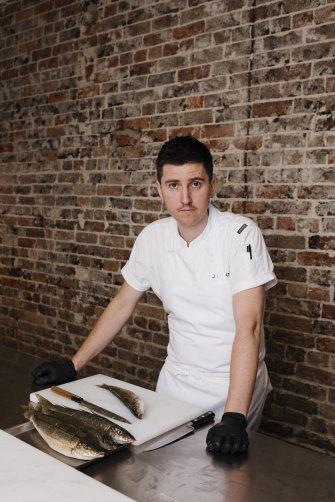 Josh Niland won book of the year at the prestigious James Beard Awards in the US.Credit:James Brickwood

As Australia locked down in the last week of March, Josh Niland swung into action. He ripped out tables and stripped the kitchen at his Sydney seafood restaurant Saint Peter, turning the narrow Paddington shopfront into a prep kitchen for Mr Niland At Home.

This wasn’t normal takeaway. In line with Niland’s “nose-to-tail” approach to seafood, dishes included swordfish sang choi bau and Balmain bug satay. Niland and his wife Julie already had a retail arm at their nearby Fish Butchery – the new business dovetailed with the customer base and infrastructure of the fishmonger. As the couple’s little empire settled into a socially distanced new normal, Niland planned his next reinvention, reducing the capacity of Saint Peter from a pre-COVID 34 to a pandemic-friendly 15, seated along a counter facing the chefs.

In among it all, on May 27, Niland’s Whole Fish Cookbook was named book of the year at the prestigious James Beard Awards in the US – huge news, which saw Niland’s phone ping crazily at 3am. The Whole Fish Cookbook is an uncompromising blueprint that lays out new ways of approaching seafood: no waste (sperm, scales, eyes are all edible), not necessarily fresh (20-day-aged tuna) and pluralistic about species (put down the Tassie salmon, folks).

“The book is motivational and inspirational,” says Sydney seafood consultant John Susman. “Josh’s approach to utilising as much of the fish as possible makes a lot of sense – it’s where the spotlight needs to be shone.”

Niland does it in the book, and also in the restaurant, where fish-eye crisps are the essential snack and kingfish head forms part of a pâté en croute. 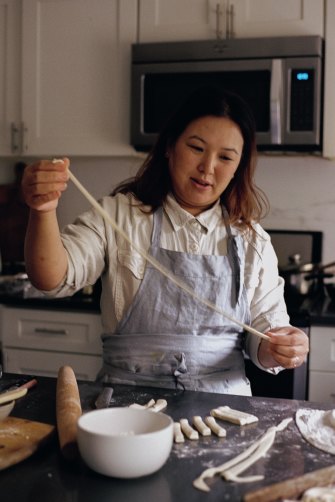 In the 2020 food world, ructions about cultural appropriation, gatekeeping and plain old racism intertwined with cascading lockdowns, the Black Lives Matter movement and a world gone mad for home cooking. Into this constantly reframing space came Hetty McKinnon’s new book, To Asia, With Love. This is cookbook number three for the bestselling Sydney author, now living in New York, and the first to deal explicitly with her Chinese-Australian heritage and the difficulty she had reconciling a childhood home of stir-fried greens with the Vegemite-sandwich suburbs.

It’s a joyful, timely book that sees, hears and celebrates second-generation immigrants, while also helping non-Asian cooks approach ingredients like cloud-ear mushrooms and gochujang with easy enthusiasm. Dumplings are filled with asparagus, mint and feta; soy sauce is part of a dense chocolate brownie mix; banh mi is turned into a salad. “She has somehow captured a way to embrace your cultural identity, reconcile it with growing up in Australia and connect with everyone,” says Sydney food writer Lee Tran Lam. “To Asia, With Love will make people think about cultural identity, inclusion and diversity in a meaningful way.”

McKinnon’s recipes are all vegetarian; that this rarely rates a mention also seems very 2020. Being post-meat isn’t even a postscript – just make it delicious.

Vazquez does not want to renew his contract with Real Madrid. He does not get a salary increase and believes that he is not appreciated
Goalkeeper Elche Badia: Messi is the best player in the world
Villas-Boas pro 1:3 with Monaco: What did VAR do today? Have you had coffee?
Ole Gunnar Solskjaer: Liverpool are a few points behind Manchester United in the Premier League, but they are still the top team
Zlatan about 0:3 with Atalanta: Ilicic could have scored even more. He had a lot of space
Andrea Pirlo: One trophy doesn't change anything. I want to win more
Setien can lead China's Dalian. Benitez left the club yesterday
Source https://www.smh.com.au/national/good-weekend-s-40-australians-who-mattered-food-20201112-p56dxc.html?ref=rss&utm_medium=rss&utm_source=rss_national