The Herald can reveal the 33-year-old has agreed to join the Wolves for the 2021 season having retired from the NRL in April 2019.

The deal was finalised on Monday afternoon when Inglis was granted a UK work permit. Warrington were set to announce the signing overnight.

Inglis’ stunning return to rugby league will shock many considering the tough personal journey that has followed his retirement.

The seeds of his comeback were only planted a month ago while talking to former Souths teammate Jason Clark, who played alongside Inglis in the club's 2014 premiership side and now plays for the Wolves.

Inglis toyed with the idea of returning to his hometown of Macksville to a play a season in Group 2. 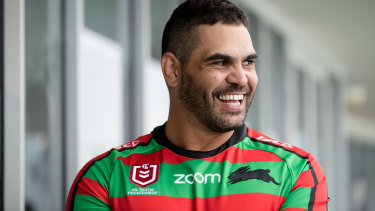 The champion Rabbitohs skipper will make his return to rugby league with Warrington in 2021.Credit:Janie Barrett

Then Rabbitohs co-owner Russell Crowe tried to persuade him to play with another Group 2 club, the Orara Valley Axemen, who the Hollywood actor wants to resurrect after they struck financial troubles earlier this year.

Souths have been aware of the negotiations, although the move doesn’t have any implications for their salary cap.

Even though Inglis suffered from knee and shoulder injuries late in his career, he wasn’t medically retired like captain Sam Burgess, who finished at the end of last season because of a serious shoulder injury.

When Inglis ended his playing career with 18 months remaining on his existing deal, the NRL salary cap auditor determined that about $900,000 of his $2 million contract would be included in Souths’ cap.

Inglis then moved into a coaching and administrative role at Redfern worth about $100,000 a year, but that agreement will end before the new deal with Warrington begins in December 2020.

The signing marks a dramatic turnaround for the former Australian and Queensland representative, who struggled with injury in the final stages of his career as well as depression.

He revealed to the Sun-Herald at the weekend he had been diagnosed with bipolar II for which he was taking medication.

‘‘I’ve battled with my mental health and I’ve been to rehab twice,” Inglis told Danny Weidler. “I have my relapses and it is not easy day to day. I’ll continue to have my issues in that area, but that’s what I’m dealing with and right now I’m really good.

‘‘The best thing that I ever did was going in and getting a diagnosis. I have bipolar II and there is no shame in saying that. I take one tablet every night and my life is much better.”

Inglis was never the same player after rupturing his anterior cruciate ligament in 2017. He also struggled with a shoulder injury.

The injuries became so troublesome that Souths coach Wayne Bennett stopped him from taking painkillers so he could take the field in his final season.

Inglis bravely admitted to his issues with depression during his career and was admitted to a rehab clinic a month after playing his final match — a 34-18 win over St George Illawarra on March 21 last year.

It was a breakthrough moment. He hasn’t drunk alcohol for more than a year, found love with partner Alyse Caccamo, tends to horses on her farm and is about to launch his own clothing brand and a junior academy.

His time away from football has also given him the chance to nurture his body as much as his mind.

Indeed, the sight of Inglis kicking and running the ball around Redfern Oval alongside his former Rabbitohs teammates during pre-season training prompted onlookers to suggest he looked fit enough to play again. Turns out, he was.

Like most codes around the world, the Super League has been grounded by the COVID-19 crisis, but Inglis is expected will fly to the UK in December if international travel has re-opened by then.

Warrington also feature England international Gareth Widdop, who Inglis played alongside at the Melbourne Storm in 2010.

Inglis played 263 matches for Melbourne and South Sydney, 32 State of Origins for Queensland and 39 Tests for Australia.

Cadiz, who retired, will sign Negredo
Zaa from crystal Palace showed racist threats from the instagram account. The police detained a 12-year-old (!) schoolboy
Ole Gunnar Solskjaer: no One wins alone, unless you're Maradona
Ocampos on Messi: you Look at him as a God, but he is real. Leo helps the players
Solskjaer on the martial-Rashford-Greenwood trio: Nothing new for Manchester United. Remember Ronaldo, Rooney and Tevez?
Josep Bartomeu: Barcelona have won La Liga 8 times in 11 years. Historic achievement
Lineker on the CAS decision on Manchester City: it's Hard to know what will happen to the FFP rules after this
Source https://www.theage.com.au/sport/nrl/greg-inglis-coming-out-of-retirement-to-play-in-uk-super-league-20200519-p54ui6.html?ref=rss&utm_medium=rss&utm_source=rss_feed