Panthers chairman Dave O'Neill insists Trent Barrett has "a long-term future at the club" after the Bulldogs narrowed their focus on the former Manly mentor to take over from Dean Pay.

On the same day Bulldogs chief executive Andrew Hill reportedly told Pay his contract would not be renewed beyond this season, Barrett has emerged as the favourite to lead the rebuild at Belmore from 2021.

Penrith bosses would be reluctant to stand in his way if Barrett is offered a return to the head coaching ranks at Belmore, but have now publicly declared how crucial they see Barrett as part of their future.

He has overseen the club's attack under head coach Ivan Cleary at the Panthers, which sit safely in the NRL's top four at the mid-way point of the season despite missing the finals last season.

"Trent has done an amazing job since returning to the club and we see him having a long-term future here," O'Neill told the Herald.

Penrith counterpart Brian Fletcher phoned Hill about an unrelated matter on Monday before the Canterbury boss told him the club planned to speak to Barrett as part of their coaching search.

Trent has done an amazing job since returning to the club and we see him having a long-term future here.

He is expected to be one of a number of candidates sounded out about the job, which will at least come with plenty of salary-cap arsenal, if not a battle to attract high-profile recruits to a club expected to miss the finals for a fourth straight year.

Barrett is contracted to the Panthers until the end of 2021, but has an undertaking he can speak to O'Neill and Penrith powerbrokers if he wants to return to the head-coaching ranks elsewhere.

The Barrett innuendo comes as no major surprise to the Panthers after weeks of speculation the Bulldogs would decide to move on Pay at the end of the season.

The club is rooted to the bottom of the NRL table with one win from nine matches this season and agreed last year to extend Pay's deal by another 12 months. 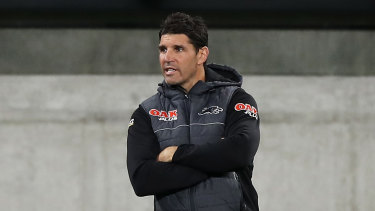 The Canterbury coach said "it would be in everyone's interests" if the board made a call on his future after losing to the struggling Broncos at Suncorp Stadium on Saturday night.

Barrett emerged from a brief stint in the coaching wilderness to help Brad Fittler's NSW State of Origin preparations last year having walked out on Manly, which he led for three years between 2016-18.

The club reached the finals in 2017, but only avoided the wooden spoon the following year thanks to the Eels. Barrett finished with 27 wins from 73 games in charge of Manly and is expected to take time over any Bulldogs approach.

Barrett still has a close relationship with Sea Eagles stars including Jake and Tom Trbojevic and has formed a powerful support staff at Penrith, including Cameron Ciraldo.

Suarez made 9 of 24 passes, leading from the center of the field in the match against Bayern
Manchester United presented their away form for the 2020/21 season
Ferdinand on Barca breeding: Bad. They still rely on old-timers
Inter wants Perisic back, even if Conte remains in the team. Bayern hopes to buy the player for less than 20 million euros
Rudi Garcia on Lyon's chances against city: the quarter-Finals showed that the favourites can also be beaten
CSKA agreed a 5-year contract with Fuchs. The transfer is estimated at 7-10 million euros
Ferdinand on Messi at Barca: Will he want to stay, given the results and the team's performance? Does he have time to wait?
Source https://www.theage.com.au/sport/nrl/he-can-have-a-long-term-future-here-penrith-boss-on-barrett-20200713-p55bpg.html?ref=rss&utm_medium=rss&utm_source=rss_feed