Garrick Ohlsson attracted international attention 50 years ago as the 1970 winner of Warsaw’s Chopin International Piano Competition. As he gently led the melody of Chopin’s Impromptu No. 2 in F-sharp major, Opus 36, from mellowness to melancholy in his first Musica Viva recital on Saturday, it was clear Chopin remains a sounding board for his musical soul.

The selection of six studies (5 – 10) from that composer’s Opus 25 that followed in the all-Chopin second half, began with number 5 in E minor, its quietly snapped rhythms like a haunting guitar. The soulful duet of number 7 between an imagined cello and violin became the expressive pivot point of the concert. After delicate filigree in Chopin’s Berceuse, Opus 57, Ohlsson finished with that composer’s Scherzo in C sharp minor, Opus 39, playing its central chorale theme with noble reserve, ornamented with cascades of light. 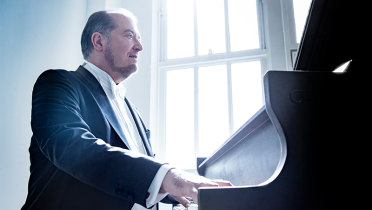 Ohlsson’s performance of Beethoven’s Sonata in B flat, Opus 22 at the start of the concert had emphasised lightness, avoiding anything over-dramatic in favour of classic grace. Some pianists play Prokofiev’s Piano Sonata No. 6 in A minor, Opus 82, as though leaping heroically through burning cities. By contrast, Ohlsson closed the first half with selfless exposition of this work’s musical purpose, bringing out classic coherence and logic amid the grotesquery of the outer movements.

For his second recital he paired Chopin with his younger contemporary, Brahms, juxtaposing that composer’s striving and virtuosic middle-period works with the inward turning mood of his late Fantasias, Opus 116. In Brahms’ Two Rhapsodies, Opus 79, Ohlsson maintained rhythmic definition amid tumult, while Opus 116, No. 4 dwelt in a sound world of peace and transformation.

The high virtuosity of Book 2 of Brahms’ Variations on a Theme of Paginini, Opus 35 teemed with playful variety, creating robust textures without heaviness. In the second half he returned to Chopin, with the haunting gently ornamented lines of his Nocturne in B flat minor, Opus 9, No. 1, and the Sonata No. 3 in B minor, Opus 58. Ohlsson presented the latter as a work of grand architecture supported by the weighty pillars of a striving first movement and a surging finale. The still turning point came in the slow movement where the breath of the music becomes so reflective and quiet as almost to stop. Ohlsson’s pianism throughout was magisterial, taming the most fearsome difficulties to visionary musical purpose and discovery.

Brazil coach: Previously there was an extraordinary Zico, today there is Neymar, and before him there were Romario and Ronaldo
Blind on Eriksen: I had to overcome myself to play against Ukraine. I am proud that I was able to
Lionel Messi: The Argentina national team has never depended on me. We are strong as a team
Real Madrid is ready to make another contract offer to Ramos. The player had a meeting with Perez
Petit on Mbappe: Kylian is often annoyed when things don't go his way. This reminds me of Neymar
Southgate on Sterling: His performance says we have to believe in him
Croatia defender Guardiola about 0:1 with England: We didn't show our maximum. We can play better

G7 summit: A tale of ‘liberal democracies’ versus ‘autocracies’

NATO summit to spell out united response to cyber attacks

Want to earn more than the PM? Local council can help

Not my story: Ardern says mosque attack film should focus on Muslim community not her

Forget about perfection in the kitchen, it’s a matter of taste

‘We always hope it will be yes this time’: toddler has 15 travel exemptions rejected

‘We knew five weeks ago things weren’t right with Boyd. He wasn’t close to playing’

Why YouTube isn’t the music industry villain any more

Biloela family likely to be released from detention within days: sources

Where you can buy a house for $59k

Spectator dies after being hit by vehicle in Finke Desert Race

BARE MINIMUM MONEY YOU NEED: Emergency cash Aussies should have

‘Captured our hearts’: The Queen and the 13 presidents

The three candidates to replace Boyd Cordner as Roos skipper

‘Lectures from men in eyeliner’: Minchin skewers (and nails) cabaret

‘I thought I was going to die’: Boy, 10, tells of Coral Bay shark attack from hospital bed

‘King of Israel’ exists leaving behind prosperity and division

‘King of Israel’ exits leaving behind prosperity and division

‘Rich and neglected music’ given a chance to shine

‘We are all compassionate’: Ministerial decision on Biloela family within days

What it costs to live on world’s coolest street

The real estate game has its own dictionary too

Aussies beleive crypto is secret to buy a home

Lock it in Rennie: Why new Wallabies squad is all about the 2023 World Cup

About 24,000 still without power as Victoria’s storm recovery continuess

About 24,000 still without power as Victoria’s storm recovery continues

There’s an eerie calm in markets despite disturbing numbers

Your Daily Horoscope for Monday, June 14

Oscar-nominated Ned Beatty, who acted in more than 150 titles, dies at 83

Peloton looks beyond the bike as it launches in Australia

As Merkel prepares to exit G7, Canada’s Trudeau aspires to replace her

Why you should still expect to see Horton in Tokyo

‘I don’t know if I could have lived with myself’: Emotional Cordner retires due to concussion fears

Stepdad used daughter’s phone as bribe to molest her

Buckley’s chance? Five questions for a Queen’s Birthday clash with a difference

Are tech’s billion-dollar CEOs worth their pay?

From the Archives, 2000: Demons reap harvest as Magpies go hungry

14 bidders battle for home with no bathroom

‘Busiest actor in Hollywood’ dead at 83