Here's the funny thing about stripping

The first was leaving the Gold Coast after graduating from film school and meeting a "an amazing woman with a double degree" who smashed all her preconceived notions about stripping. 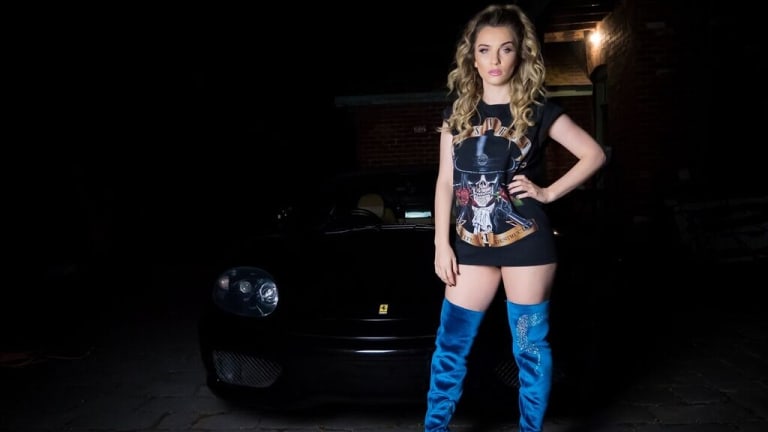 Stripper Chase Paradise discovered she has a talent for comedy.

"She had worked all over the world with NGOs and done aid missions and was stripping to pay for her lifestyle," says Paradise. "So I started doing it. She was my roommate at the time."

The second revelation was realising, through making her stripper colleagues laugh by telling jokes in the dressing room, that she had a talent for comedy.

"And it just grew from there. Strippers gave me my first job. I started hosting Baby Got Backa, which was a show at Perth Fringe that was a sell-out show and it just kind of started from there."

Now Paradise shares the bill with emerging and established comedians such as the Umbilical Brothers, Aaron Chen, Cassie Workman and Michael Hing at Sydney Fringe Comedy.

Fresh from working with an all-female cabaret called Seen And Heard in Edinburgh, Paradise will perform her debut show, Ho Life Or No Life, which sold out at the Melbourne International Comedy Festival.

"I think the show is like a colourful and unapologetic expression of female sexuality without shying away from the brutality that women, particularly sex workers, face," she says.

It promises to take you backstage into a world of stripping, celebrity encounters, personal stories and more during a night of what has been called "sex-positive comedy".

"It's writing jokes that take pride in sexuality, as opposed to from a position of shame," explains Paradise. "So, rather than slut shaming or, you know, making fun of people from the LGBT community or women or whatever.

"It's important that people take pride in their sexuality and they can come to a show where they see themselves, rather than being the butt of every joke."

So what things do strippers find funny? The clients?

"Yes. Such as the way that we're perceived in the club versus the reality … and I suppose the expectations of men and just their behaviour in regard to sexual entitlement and having to pay for something that they think should be given to them freely.

"I've had a lot of really positive feedback from male audience members. I even had one cry, saying that he was so moved by it."

Paradise says she was more nervous performing comedy for the first time than stripping.

"Absolutely. I was never nervous up on stage at the strip club. I think it's because I really, really care about how my mind is perceived, whereas I don't really care how my body is perceived."

Interacting with strip-club customers has also made her bullet-proof to hecklers.

"I think one of the things that prepared me the most for comedy is there's nothing a person could heckle at me that I haven't heard before. If anything, I would welcome somebody to say something new, honest and surprising."

Ho Life Or No Life, The Factory Theatre, Marrickville,September 19-22.

Werder fans are the best: they supported the team with a tractor emblem and thanked the Union with a hundred cases of beer
Flick about the Cup final with Bayer: It will not be like in the championship. They can hurt us
Holland will play in Dortmund and under 9-m number from the next season
Solskjaere and Lampard are among the contenders for the title of best coach in June in the Premier League
Umtiti injured his left knee. He won't have surgery
Thibaut Courtois: there are a lot of difficult matches Ahead, but it is better to be 4 points ahead than to fall behind with such a margin
Bayern have not received offers for Tiago, but the player has already said goodbye to the team
Source https://www.smh.com.au/entertainment/comedy/heres-the-funny-thing-about-stripping-20180917-h15h5k.html?ref=rss&utm_medium=rss&utm_source=rss_entertainment

'That was State of Origin': Reds claim bragging rights over Waratahs in bruising clash

The 12-year-old and his mate battling chuck-out culture, one repair at a time

When's it OK to call the cops? The new questions being asked in the US

I got a full bird's stuffing with my half chicken: will it ruffle feathers?

Italy has its trattoria, France its bistro; Australia has the pub

'Give me the shot': Papenhuyzen reveals whisper to Smith that led to clutch kick in epic win

Jackie Trad will be back in Cabinet if Palaszczuk government wins: Gleeson

RIDING THE WAVE: The number that will trigger a ‘second wave’ of virus

Loss of serenity in the suburbs could stymie airport's growth plans

World must stand up for Hong Kong's liberty

Winmar mediation case 'resolved' but more to be done

Could this be ‘the beginning of the end’ of Andrews’ leadership: Credlin

Thousands of students and staff at Truganina school sent into isolation

Joey’s surprising snub in Blues halves for State of Origin

World must unite and stand up for Hong Kong’s liberty

Crazy lines as hundreds rush to be tested

Hamilton has arrived on Disney+, but should you watch it?

‘THERE IS A PROBLEM’: Questions over huge virus response delay

Flooding in Mumbai After Heavy Rainfall

Correctional officer taken to hospital after incident with prisoner

The Weekend at Bernie's economy

'The Weekend at Bernie's effect': Reality to hit economy once support ends

China warns Australia against going 'further down the wrong path'

'I am not happy': Premier accepts finding over falsified documents

AFL 2020 live updates: Collingwood and Essendon look to head into hubs with a win

Rebels debutante ready to leap into the deep end

I thought I had jet lag, this was worse

Teammates, greats and opponents on Joel Selwood and Gary Ablett

Joel Selwood and Gary Ablett: in praise of two greats

Oppression, racism, monuments and myths make for a potent show

VFL to press ahead without Demons

Gone to the dogs: Why greyhound racing's new code is a complete crock

Hamilton is on Disney streaming from today

Australia has helped in the past ‘and I expect it will again’: Paterson

In the news: Steele Sidebottom