Hundreds are feared killed or injured following a massive explosion that rocked the Lebanese capital Beirut and destroyed buildings many kilometres away from the blast site.

The blast occurred in the city's port area on Tuesday afternoon, sending a huge shockwave across the city which destroyed warehouses, homes and office blocks and sent shocked residents pouring on the streets for help.

Footage from the city shows people being rushed to hospitals, which local TV said had been quickly overwhelmed with casualties.

Videos show a fire was raging at a warehouse before the huge explosion rippled through the capital. It was thought to have been caused by a large fireworks stockpile, however security officials are still investigating.

"I saw a fireball and smoke billowing over Beirut. People were screaming and running, bleeding. Balconies were blown off buildings. Glass in high-rise buildings shattered and fell to the street," one witness told Reuters.

Another witness described the scene as "total chaos". 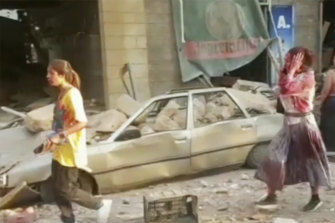 Local television footage showed severe damage to several houses and shops near the Port of Beirut, including the home of former prime minister Saad Hariri.

Debris filled the ground at the port and other footage showed damaged container trucks and vehicles.

The Lebanese Red Cross said they were at the scene of the explosion, according to their tweets.

Fati scored 3 goals in 2 La Liga matches. He has 10 goals for Barca in 26 League games
Dest about Barcelona: It's an honor to play for the best team in the world
PSG are set to sign AUAR in the summer of 2021. Arsenal and Juventus are Interested in the player
Juve offered Fiorentina Rugani and De Sciglio as part of the payment for Chiesa. Violets want Demiral
Messi and Ronaldo have not seen each other for more than two years, and now they are heading to the Champions League. According to personal meetings, Leo takes out the opponent with a break
UEFA returns fans to the Champions League and Europa League, but empty stands will remain - in England, Spain, Italy and other countries local bans are in force
Zhivoglyadov about Champions League: Loko got the strongest teams of their leagues. Bayern writes a new story
Source https://www.theage.com.au/world/middle-east/explosion-rocks-lebanese-capital-beirut-20200805-p55il5.html?ref=rss&utm_medium=rss&utm_source=rss_feed