How to avoid getting ripped off by excessive super fund fees

I blame Paul Keating. Nice bloke and all. Great taste in antique clocks. But the reform era he oversaw during the 1980s and 1990s vastly complicated the financial lives of all Australians. 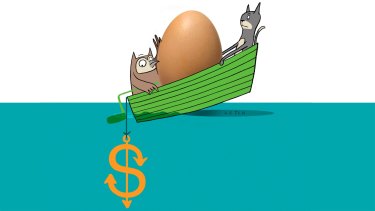 Excessive super fund fees can have a detrimental impact on your retirement savings.Credit:Simon Letch

Back in the day, you turned up to work, ploughed your salary into paying off the mortgage until you retired and collected your age pension.

If they could afford to, some workers would put some extra aside to help bolster their retirement incomes.

Keating’s radical vision was to extend that practice to all workers. In 1993, he oversaw the introduction of compulsory superannuation.

Since then – first in a trickle, then in a flood – Australians have been forced to pour trillions of dollars into their super accounts.

It all happens out of sight and out of mind, deducted from wages by employers and whisked away into the hands of super funds to manage at their discretion.

Today, the value of our collective super nest egg sits at $3 trillion dollars.

From it, funds deduct a whopping $30 billion a year in fees.

It’s easy to forget super fees when it comes to putting together a household budget.

But paying too much in fees can cost you hundreds of thousands of dollars in retirement.

When the Productivity Commission looked at it a few years ago, they found a 21-year-old today who accidentally ended up holding multiple super accounts with underperforming funds would end up with $407,000 less to spend in retirement.

So, for the final week of my 10-week money makeover challenge, I decided to sit down and really look at how much money I spend on super fees and other professional service fees, like bank fees, accountant fees, legal fees and other insurance or debt costs not previously covered.

I’m calling them “white-collar dimes” – the money we pay to men and women in suits to help us manage our finances.

Since the financial deregulation of the 1980s, it’s an ever-growing expense for most families.

And sure, some of these money managers earn their keep.

But plenty also make a tidy profit by exploiting consumer inertia and a lack of information when it comes to money.

I summoned the courage to have a good read of my super statement for the past financial year.

My transaction history shows I paid a monthly “admin” fee of about $5.50 a month and insurance premiums of about $7.50 a month for the default cover which came with my policy.

So far, so modest. Until I came to a lengthy section titled “indirect and other fees”.

There I discovered I had been charged an annual fee of $1062 for “indirect” fees. Huh? There followed an opaque list of exotically titled things like “over-the-counter derivative costs” and “net explicit transactional and operational costs”.

In short: it’s the bit where you and I pay for the Audi and private school fees of the fund manager investing our money.

I was also charged $764 for “other fees”, which were helpfully explained simply as “fees that are not reflected as transactions on this statement”.

Thanks guys; that’s about as clear as mud.

All up, I discovered I had paid $1890 in super fees last financial year (excluding insurance premiums), which is about double my annual electricity bill.

According to Alex Dunnin from Rainmaker, the average fee on super funds today is about 1 per cent and trending lower. But many people are still stranded with much higher fee products.

“Fees have reset,” says Dunnin. “What was normal a few years back is now exorbitant.”

Just like the banks with home loans, if you fail to check your super fees, it’s likely you’re getting ripped off.

So, if you do only one thing today – and you’ve already rung your bank to make sure your mortgage interest rate has a “2” in front – get out your super statement and have a look.

If you've got more than one account, please don’t tell me and please just consolidate it into one account as soon as possible. It pains me too much to think of all the people out there burning money by paying multiple fees across a number of accounts.

Look at the total fee amount you are paying on your account – not just admin fees, but all "other" and "indirect" fees as well. Calculate how much that represents are as a percentage of your total balance. If you’re paying more than about 1 per cent of your balance in fees, it’s time to do something about it.

Look, maybe it's not all Paul Keating's fault. Governments of all stripes have failed to protect Aussie retirement savers from being fleeced by excessive super fees. Don't get mad: get even.

Ronald Koeman: Everyone knows that my dream is to train Barca
Robbie Fowler: Werner is not good enough for Liverpool
🏡Perfect Cavani quarantine: feeds calves and mows grass
Chelsea has a verbal agreement with Werner. The documents are almost ready
Bonucci on the move to Milan: It wasn't useless. I have become a better person
LeBron, Liverpool and Barcelona support the protests in the US. It is (almost) impossible to understand why, but let's try
Handshakes are now banned, but where did they come from and when did they come to football? By the way, they were banned even in the 20s after the Spanish
Source https://www.theage.com.au/money/planning-and-budgeting/how-to-avoid-getting-ripped-off-by-excessive-super-fund-fees-20200522-p54vgu.html?ref=rss&utm_medium=rss&utm_source=rss_feed

Victoria could be peacemaker in China-Australia relationship: China expert

'Happy to own up': Lodge concedes Broncos were sucked in by hype

‘Failure of leadership’ of protesters and politicians to blame for protests

Victorian racing chiefs call for spring prizemoney to be preserved

‘Stunning’: Australia lose it for Bradman

Premier will be able to commit to border date this week

Ponga proves his worth as O'Brien's Knights claim Canberra scalp

Superstars stumble but Prince of Arran has Cup in sights again

'Abused' and 'spat on': payout cleared for toxic contamination victims

Protests must be managed with pragmatism and sense of history

Race-by-race tips and preview for Warwick Farm on Monday

Water Police in spate of rescues

'Keep each other safe': Health Minister warns against more protests in Sydney

Coronavirus cases near 7 million amid surges in Brazil, India

GREAT AMERICAN MYTH: Dark secret at the heart of ongoing US chaos

Two striking Australian novels with trauma at their heart

Pay brushes off pressure ahead of Dragons basement battle

Tens of thousands rally across Germany

Cancer treatment trials to get $13.6m

World reacts to insane ‘KO of the year’

Crowds gather around the White House

From the Archives, 2000: Australians evacuated from Solomon Islands after coup

Easi does it: The food delivery minnow riding high during lockdown

Easi rider: The food delivery minnow taking on the giants

Supercars to resume with sprints in Sydney

In search of the blessing of Nina Simone

With her stand-up stood down, comedian Hannah Camilleri turned to film

Americans have gargled bleach, applied it to their skin, survey shows

From the Archives: Heroes of the 1998 Sydney to Hobart tell of yacht rescues

Your social etiquette guide to navigating the 'new normal'

Zuckerberg-funded scientists call on Facebook to rein in Trump

Australia did ‘absolutely not’ have to lockdown