How do you solve a problem like friendlyjordies? It was the question on the lips of Nationals MPs last week when the YouTube political commentator dropped his latest video set inside the holiday home of Deputy Premier and party leader John Barilaro. 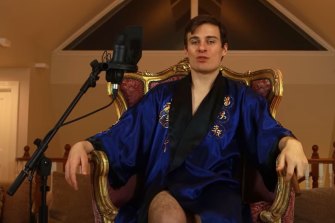 The video Jordan Shanks filmed at the holiday home of Deputy Premier John Barilaro has been watched 350,000 times.Credit:@friendlyjordies

Shanks, 31, is known for his sardonic style and pushing the bounds of good taste. He is tacitly endorsed by the Labor Party, which considers his videos a way to reach Gen Y voters. But questions have been raised about his tactics after recent stunts, as well as comments about allegations of sexual harassment against former NSW opposition leader Luke Foley. Police are also investigating a complaint against Shanks.

One Labor campaign strategist, who asked not to be named, said Shanks' "nasty" style was starting to cause concern inside the party in NSW. "The stuff he has done with John Barilaro is racist," the person said. "My recommendation to people is to stay away."

Last week Shanks shared a 26-minute editorial accusing Mr Barilaro of taxpayer corruption and environmental vandalism. The video, since watched almost 350,000 times, landed amid the Coalition crisis over Mr Barilaro's threats to take his party to the crossbench over koala protection.

Shanks and his production team booked the seven-bedroom Dungowan Estate near Braidwood, which rents for $1850 a night and is managed by Mr Barilaro's wife. "As you've probably gathered, or haven't because you're that dumb, I'm filming at your estate," he said in comments directed at Mr Barilaro, satirising the Nationals leader's Italian heritage using accents and props.

Mr Barilaro has since said he will take a month of mental health leave after a torrid week on Macquarie Street.

A Nationals source said Shanks' behaviour was abhorrent. "Labor is clearly endorsing him and his attacks."

Friendlyjordies has been publishing on YouTube since 2013, to a growing audience of almost half a million subscribers, among them a politically engaged cohort of young voters.

A senior Labor source said while Shanks pushed boundaries with his videos, he resonated to young voters.

"His stated positions on many environmental issues accord with core Labor principles. If we don't seize all options of new media and cling to old media, we are all doomed," the source said, adding that controversial media personalities had long existed. "We don't vet Ray Hadley or Alan Jones."

We've seen the demise of our regional TV news, our papers are doing it tough ... Friendlyjordies are filling the spot.

Police have confirmed they are investigating an allegation of harassment by Shanks, after a journalist filed a complaint against the entertainer for attending his home at night and tweeting a photograph of the outside. The photo was accompanied by the words: "Nothing better than a simple walk at night. [Retweet] if you agree." The post did not state who lived there.

The journalist – whom The Sun-Herald has agreed not to name – filed an official complaint with NSW Police fixated persons unit last month. In the police statement, seen by The Sun-Herald, the person said criticism and attention was inevitable given their public profile, but "the attention I have received from Jordan Shanks has escalated to the point of harassment".

Another Labor source said some members were upset by comments he made about a sexual harassment claim against former NSW opposition leader Luke Foley, who was forced to resign over an allegation he put his hand down the dress of ABC reporter Ashleigh Raper in 2016. Discussing the incident Shanks said, "It's just his word against hers ... fired as opposition leader for grabbing someone's ass while you're drunk? I don't know about that."

When The Sun-Herald sought an interview with Shanks, a man identifying as his secretary and "gatekeeper" insisted on asking questions about the masthead's political leanings first.

When Shanks came to the phone he spoke about his involvement in an ongoing koala fundraising project before hanging up. In response to emailed questions, Shanks largely did not address the subjects, including the harassment allegation against him. On the question of why his content appeals to young people, he said "because I'm not The Sydney Morning Herald".

NSW Shooters and Fishers MP Helen Dalton, who recently appeared in a friendlyjordies interview, said she did not always agree with his style or content – but it cut through.

"They are the ones coming out to regional areas and asking questions. We've seen the demise of our regional TV news, our papers are doing it tough and we are having less and less say. Friendlyjordies are filling the spot."

The member for Murray, who broke 35 years of Nationals party incumbency in 2019, praised friendlyjordies for covering regional council corruption, water, grants and environmental issues that are being overlooked by mainstream media.

Communication and media PhD student at the University of Newcastle Jarrod Bonsom said friendlyjordies was "fostering critical thinking" in an entire generation.

"Young people are craving an alternative to the mainstream media narrative. Obviously he has very strong views and advocates for Labor ... but his voice speaks to younger generations who are incredibly concerned about issues like climate change."

He said the friendlyjordies approach was not necessarily different to that of Barry Humphries or Monty Python, who were "merciless" in the way they made fun of people and institutions.

"There will always be people you upset in order to have bite ... he just doesn't have to rely on the BBC or ABC to do that," he said, adding, "I'm not in the business of censoring."

Pirlo about 1:1 with Verona: Juve do not need a slap in the face to Wake up and play intensely
Everton and Liverpool in the top 2 at the end of the round in the Premier League for the first time in 27 years
Arteta about 0:1 with Leicester: I Don't know why the hell our goal was canceled. It is difficult to create space when 10 people are sitting behind the ball line
Rodgers on 1-0 with Arsenal: Leicester deserved to win. Vardy is a world-class player
Juve without Ronaldo could not beat Verona and Crotone in Serie A
Vardy has scored 11 goals in 12 games against Arsenal in the Premier League. Only Rooney has more
15,000 Teddy bears were planted at the Heerenveen match as part of a campaign to fight cancer. Toys sold for 230 thousand euros
Source https://www.theage.com.au/national/nsw/how-to-solve-a-problem-like-friendlyjordies-politicians-debate-new-age-commentator-20200918-p55x4a.html?ref=rss&utm_medium=rss&utm_source=rss_national