And while his cut-out pass for Stephen Crichton in the first half was intercepted by Melbourne flyer Suliasi Vunivalu who scored a long-range try, Cleary maintained: "If I had my time again I'd do it again.''

"It's hard, you keep thinking back to the game, things like you'd have back," Cleary said after Sunday night's 26-20 loss to the Storm.

"The intercept was the turning point. I felt I let the boys down a fair bit.

"I saw [Storm centre] Brenko Lee shoot out of the line – that's why I threw it, I just didn't execute it well enough. I threw it too high and Vunivalu did pretty well. 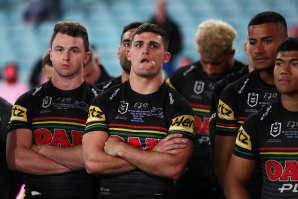 Nathan Cleary was blaming himself for the Panthers' loss.Credit:Getty Images

"If I had my time again I'd do it again. I'm glad I saw it and went with it, I just didn't execute it. That's what you need to do on the big stage.

"I am [blaming myself] to be honest. A lot of things in that game you'd like to have back. I think all of us as a team, we blew too many opportunities and gave away so much ball, but it was 26-20 at the end of the day. It's hard to take."

The young face of the Panthers enjoyed an excellent 2020, but was kept quiet by Melbourne most of the night.

He scored a try in the final seconds, but was hounded almost every time he kicked, had no answers for Ryan Papenhuyzen who zoomed past him to score in the second half, then failed to find touch when Papenhuyzen somehow leapt high to get the ball back for Melbourne. 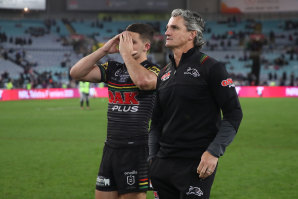 The heartbreak was shared between father and son.Credit:Getty Images

"It's a pretty emotional time - a lot of boys were [in tears]," Cleary said.

"It's hard to see your mates like that, too. We'll come together as a group and enjoy each other's company. It's been a big year for us and for a young group, a lot of experience will come out of this.

"We learned a lot of lessons tonight and we can take that into the future."

Cleary said the kick pressure from Melbourne was "easily the best I've faced this year". Melbourne coach Craig Bellamy was overheard yelling from the box in the first minute "hit him" as soon as Cleary shaped to kick. 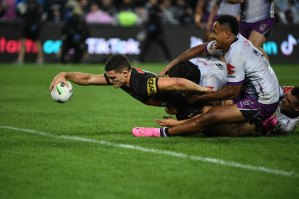 The 22-year-old said Storm legend Cameron Smith had some wise words for him after the game in the middle of a soggy ANZ Stadium.

"He was good," Cleary said of Smith. "He said, 'I've been there before, you'll come back bigger and better.'

"I couldn't agree more. They all shook your hand and were humble."

Cleary knows the pain will last a while, but was also grateful Origin would give him a chance to forget about the grand final.

He will head into Blues camp later this week with NSW newcomers Stephen Crichton, Jarome Luai and Isaah Yeo. 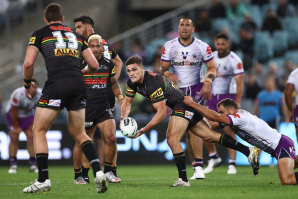 The halfback tries to sneak a pass away.Credit:Getty Images

"I'm lucky enough to go into Origin camp, so I can't let it sting for too long," Cleary said.

"I'm in a lucky position where I can play some footy now and try to put it behind me.

"It will definitely sting the next few days. It's annoying. Just sitting there, you keep replaying it over in your head. You can't change it now. I can only control what I do in the future and hopefully I'll be better for it.

"There are just a few things I could have done better. Controlling the team ... we were getting a bit frantic, especially in the second half, we just needed to stay in it, but we gave away too much ball and were doing things we don't usually do."

Despite missing out on the Dally M at the start of last week, Cleary was crowned the Players' Champion on Sunday night, the award voted for by his peers and run by the Rugby League Players' Association.

Goodbye, Dad Buba Diop. Thanks to you, I lived the most memorable tournament of my childhood
Nuno about 2:1 with Arsenal: We played amazing, very proud. Jimenez recovered
Arsenal scored 13 points in 10 opening matches - the worst result in 39 years
West Brom can be bought by us investors. The Chinese owner of the club wants 150 million pounds
Lampard on Mourinho's words about ponies: You have Kane, Son, bale and alli. We are all fighting to win the Premier League
Mourinho on winning the Premier League: Tottenham are not in the race, because we are not a horse, but a pony
Laurent Blanc: I will return to football, but in children's. Now coaches are being asked to increase the cost of players, I don't like it
Source https://www.smh.com.au/sport/nrl/i-d-do-it-again-nathan-cleary-says-he-d-throw-the-same-cut-out-pass-20201026-p568hd.html?ref=rss&utm_medium=rss&utm_source=rss_feed