The woman who accused Seoul mayor Park Won-soon of sexual harassment said she wanted to have her claims tested by a court and hoped to forgive him after alleging he had repeatedly harassed her over a four-year period. 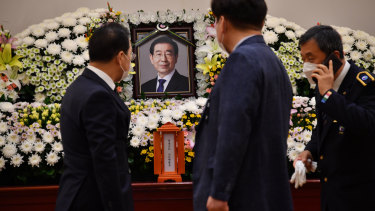 The harassment claims and the subsequent death of the 64-year-old mayor and potential presidential candidate have rocked South Korea.

The secretary, who has not been identified, said in a statement released on Monday that she should have reported the allegations earlier.

"I should have screamed, cried out and reported him to the police. I regret I didn't and if I did, I wouldn't blame myself so much now," she said.

"I am weak and powerless in front of the tremendous power and I needed the fair and equal law to protect myself. I hoped to scream to him not to do this to me in a safe courtroom. I hoped to cry out that it was so painful. I hoped to forgive him."

The survivor said Park had tried to kiss her on her knees, invited her to his bedroom where he would hug her, sexually invited her to a Telegram chatroom and kept sending her lewd texts and photos of himself wearing underwear.

"I hoped that he would be judged by the law in the Republic of Korea and to receive a humane apology," she said. "The person who damaged my dignity put down his own dignity on the day I courageously reported to the police and was investigated."

Park was reported missing by his daughter on Thursday and found dead in the hills surrounding the South Korean capital after a seven-hour search.

The secretary's attorney Kim Jae-ryun said the case should not vanish because of the absence of the defendant. "In the current situation, revealing the facts of the case is the first step in restoring human rights," she told the Seoul Daily on Monday.

During his three terms as Mayor, Park appointed a special adviser on gender equality issues and focused on provided affordable housing for working single women. The World Economic Forum's Global Gender Gap report ranked South Korea as 127th out of 153 countries in 2020 for economic participation and opportunity. The country has battled to turn-around a historically highly patriarchal society, where only 15 per cent of senior and leadership positions are held by women with income half that of men.

In the wake of the allegations, up to 535,000 South Koreans signed a petition against holding a large-scale state funeral for Park.

The funeral, which went ahead on Monday, hosted up to 100 mourners while others were able to stream the service online due to the coronavirus. Up to 900,000 had expressed their condolences for the mayor on an online platform set up by the Seoul council.

Kashtru about the defeat of Basel: a Difficult match, but Shakhtar dominated almost all the time
Nuno about 0:1 with Sevilla: Disappointment. Wolverhampton conceded too often in the final minutes
Immobile about Newcastle: They called my agent when the sheikhs bought the club
Liverpool are confident they will sign Tiago. The player has already agreed a contract and is pressing Bayern
Our judging = fear and helplessness. Instead of Kaloshin and Kashshai – a soulless system that does not care
Lothar Matteus: Messi is not enough to pass such a Bayern. I am not afraid of Barca
Thomas Tuchel: Mbappe will play Atalanta if nothing happens
Source https://www.smh.com.au/world/asia/i-hoped-to-forgive-him-seoul-mayor-accuser-speaks-out-after-his-death-20200713-p55boj.html?ref=rss&utm_medium=rss&utm_source=rss_feed