Gerald Ryan’s secret test of a good horse told him Peltzer was up with Snitzel, Snitzerland and Rubick and he is confident the colt will join that elite company as a group 1 winner in 2021.

Snitzel and Snitzerland won at the top level. The best of Rubick wasn’t seen on the track, but he sired The Everest winner Yes Yes Yes.

It is a high standard for Peltzer to meet but he is on the way after winning the Bondi Stakes (1600m) at Randwick on Saturday. 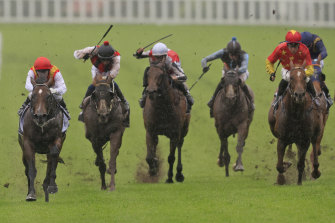 Peltzer, left, runs away with the Bondi Stakes as his rivals struggle in his wake.Credit:Getty

“Right back from when he had his first jump-out in late November, I knew he was special,” Ryan said. “I have only had four horses run the time up the back straight from the 1500m to 1000m from where I clock it . . . break 30 [seconds].

The So You Think colt made the $1 million race a one-act affair and will target races like the Randwick Guineas, Doncaster and All Aged Stakes in the autumn.

Peltzer ($2.80 fav) controlled the Bondi before Tim Clark asked him to accelerate, and he dashed away from a 2¾ lengths victory from Prime Star ($3.80) with Real Peace ($31) getting into third late.

“Getting his toe right into it today, he was just a different horse. He really quickened well at the 300m when I asked him and put the race beyond doubt pretty quickly,” Clark said.

“Going forward, now that he has shown he can run out a strong mile, he’s got a really nice attitude, he doesn’t worry about things and he’s a beautifully natured horse to ride.

“In the autumn, where generally we do get wet tracks, I’m sure he will be able to measure up to some better races.”

Ryan thinks he could improve with a spell as he has effectively been in work for all of 2020.

“We will put him away Monday. He has only had 26 days off since the second week in January, so he can have a good spell now,” Ryan said. “I reckon we are going to have a ball in the autumn.

“He may improve or hold his own. He’s a horse who could improve. He has a great attitude for a colt and will come back a nice horse in the autumn.

“The aim in the autumn will be the Randwick Guineas, and we will see where we end up. The Doncaster is there as well, it is on the agenda.

“What’s better, an All-Aged Stakes against the older horses or a handicap against older horses?"

Tommy Berry thought he was on the winner when Prime Star loomed into the race, but he couldn't match Peltzer.

“Just beaten by a better horse. He had a beautiful run," Berry said. "I thought we were the winner at the top of the straight but the winner found too much.”

Cavani has scored 253 goals in the top 5 of the Europa League since making his Serie A debut in 2007. Only Messi and Ronaldo have more in that time
Bonera on the victory over Fiorentina: for Milan, this is a new piece of a huge mosaic
Cherchesov about Zabolotny: Big plus-it has moments, it is necessary to realize. He works for the team and really helps a lot
Messi dedicated the goal to Maradona: under the Barca Jersey, he put on a retro Newells old boys t-shirt. Diego played 5 games for him in 1993
Cavani scored 3 (2+1) points, coming on as a substitute in Manchester United's match with Southampton. He has 3 goals in 5 games in the Premier League
Solskjaer about the comeback against Southampton (3:2): Manchester United never give up - this is a feature of the club
Koeman about 4:0 with Osasuna: an Important win, I'm happy. Barcelona can't afford to lose any more
Source https://www.theage.com.au/sport/racing/i-knew-he-was-special-ryan-thinks-the-best-is-to-come-from-peltzer-20201024-p5688f.html?ref=rss&utm_medium=rss&utm_source=rss_feed

The reading wars are over - and phonics has won

NSW tiring of the Premier's disregard for taxpayers

In the line of fire: Will Morris survive at the Sharks?

'People don’t want to look the same': A guide to buying a bespoke suit

The challenges and joys of a second career in teaching

It's all academic for me

Labor pushes for more jobs in the bush to revive economy, environment

'It looks dodgy': watchdog to look into land deal for state-significant project

The two issues policymakers have to grapple with on JobSeeker

Morrison should coax Britain into fray with China

Crown on the hunt for new heads

Our allies need to step up response to China

From the pandemic, a new stage of laughter and music for Melbourne

Morrison should heed his own advice - and fix his culture problem

Help wanted: Would you work in Victoria's quarantine hotels for $85k?

When it comes to leadership, credit is long overdue

'Playing in shadows': Towers approved next to Birrarung Marr

The towns that COVID-19 forgot

Fast trains on the wish list ahead of Queensland's delayed budget

Warner leaves SCG in agony, in doubt for first Test with groin injury

There must be a better way of dealing with this

There's always time, if not a watch, to appreciate a job well-done

‘WON’T BACK DOWN’: Bannon’s back as Trump weapon in election fight

Warner in doubt for opening Test against India

Fraser Island Fire Continues to Rage as it Reaches 74,000 Hectares

Hong Kong leader says she has 'piles of cash at home,' no bank account, due to US sanctions

Toys pulled from Qld shelves over safety concerns ahead of Christmas

It's done: Tigers release Aloiai for fee after Ofahengaue signing

As summer arrives, Sydney's flying foxes are waiting for their sprinklers