The Ryan Papenhuyzen fan club has now spilled over into the playing ranks with some of the game's top No.1s excited to see what the Melbourne fullback produces in the NRL grand final.

Papenhuyzen will look to cap a brilliant second year in the NRL with a premiership on Sunday evening against Penrith.

Tedesco and Gutherson will team up with Papenhuyzen in NSW Origin camp next week, while Slater has worked all year with the Storm fullback and spoke to him a number of times during the week.

What the 80 kilogram Papenhuyzen lacks in size he makes up for with sheer courage, something that has not been lost on Slater.

"Size didn't matter with Preston Campbell either," Slater said. "When you have courage and toughness, size isn't a limitation.

"People think about an 80kg fullback running into 120kg and 125kg men in the middle of the field. But I know who is more afraid of who. 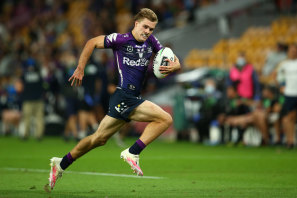 Catch me if you can ... Ryan Papenhuyzen Credit:Getty

Slater has often been praised by Papenhuyzen and coach Craig Bellamy for helping fast-track the 22-year-old Sydneysider's development, but Slater said while he often discussed the "subtleties around his game and the opposition", Papenhuyzen deserved all the credit for his scintillating form.

Laurie Daley was on Sky Sports Radio this week when he asked Penrith coach Ivan Cleary if Papenhuyzen or Cameron Smith posed a bigger danger to the Panthers. Cleary nominated Smith, and Slater agreed.

"Speed in our game will always be a threat. And that's one thing the Storm have, they have speed. And if you go to sleep for a split second, Josh Addo-Carr and Ryan Papenhuyzen will get through."

Papenhuyzen's season will not end on Sunday night with the lightweight a near certainty to be included in Brad Fittler's NSW Blues' train-on squad.

"He has to be in the conversation; I've got no doubts he is, and I know him too well to know he wouldn't let anybody down," Slater said.

Tedesco and Gutherson are already in Blues camp and said they were excited to see what Papenhuyzen could produce in the decider.

"He's been so consistent, he's played a few more games now and he's in a good system with Melbourne," Tedesco said. "All facets of his game have improved. We know how fast he is, but his support play has been good, his passing game, his all-round fullback play has been top-class.

"He's got that speed – he's got me and Gutho covered in that area. He doesn't have the size, but that courage, which is all you need."

Gutherson added: "We played them twice this year – he torched us once, we did a pretty good job the other time – but you can't keep him out of the game. He's always there and he's never afraid to go after it."

Pep on city's 1st place in the Champions League group: we played very well in all the matches
Shakhtar defender Vitao on 2:0 with Real Madrid: the main Thing is not to fly too high in the clouds
Kiknadze and Meshcheryakov-out! Rabiner after Loko's defeat by Red bull
Real Madrid conceded 9 goals in 5 rounds of the Champions League group stage for The first time
Flick about 1:1 with Atletico: after Muller and Gnabry came on as substitutes, Bayern added to the movement
Muller scored his 47th goal in the Champions League and moved into 10th place ahead of Inzaghi. Zlatan and Shevchenko have 48 goals each
Liverpool and Porto broke into the Champions League play-offs - there are already 8 teams. Which ones? And who is about to be added to them?
Source https://www.smh.com.au/sport/nrl/i-know-who-is-afraid-of-who-slater-backs-papi-to-show-big-men-who-s-boss-20201024-p5687e.html?ref=rss&utm_medium=rss&utm_source=rss_feed