Eddie Jones will be involved with an NRL club one day, possibly as coach, more likely coaching director, maybe even coach whisperer.

His friends tell you it's a scratch he'll need to eventually itch. One describes rugby league as his "fetish" … there's a line there somewhere but we're not touching it.

As Jones wrote in his absorbing autobiography released late last year about growing up alongside the famous Ella brothers and following South Sydney Rabbitohs: "We are still mad-keen rugby league fans today. I can't get enough of it."

The day Jones officially leaves rugby union and converts to league is likely to come later, not sooner, even though talks with Canterbury have taken place.

It can be revealed that emerging NRL player agent Matt Desira held discussions with the Bulldogs chief executive Andrew Hill and other directors on behalf of Jones. 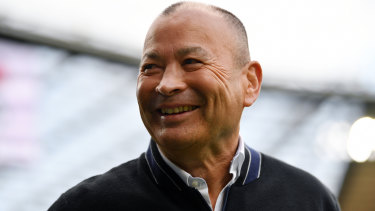 England rugby coach Eddie Jones has been linked to the Bulldogs. Don't believe the hype.Credit:Getty

When asked by this column if he was genuinely interested in the Bulldogs job, Jones replied: "No mate. I'm focused on England til 2023 (Rugby World Cup)".

Meanwhile, long-time Jones watchers have been watching the Bulldogs speculation bubbling along and reckon they know what's at play.

Jones, 60, is contracted to England until the end of the next Rugby World Cup in 2023, but just this week was told by the Rugby Football Union he could expect the 25 per cent pay cut taken earlier this year because of COVID-19 to now be "longer term".

Last month, Jones was linked to the Cronulla Sharks, although the club and Jones himself have insisted no discussions took place. The only correspondence came when Sharks boss Dino Mezzatesta texted him to apologise for innocently asking "Eddie Who?" when pressed by one reporter about the story. Jones replied to say he wasn't offended at all.

Since then, he's also been connected to club positions in Japan and the US, but how genuine that is remains unclear. He's also recently been approached by UK Super League clubs.

What's becoming clearer by the day is that he's playing all of us off a break.

He's known as a master manipulator, particularly of the media. In his book, he wrote of the importance of his former Brumbies media manager David Pembroke: "We still speak most days, as he ensures I stay on top of my communication. He's a brilliant strategist and helps me shape the right message to the right audience at the right time in order to help my England team succeed". 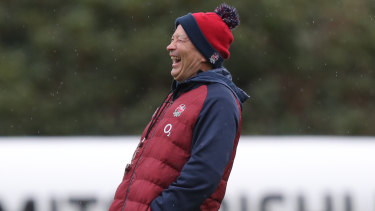 Another factor is Jason Ryles, the Storm's highly regarded assistant coach who will join Jones' staff as skills coach as soon as the NRL season ends. Ryles' management said his client had been given no indication that Jones wants out of the England job. They are in weekly contact with each other.

What's more likely is Jones feathering his nest, so to speak, in anticipation of an NRL position after the World Cup.

As coach? Unlikely. Coaching director? Now you're getting warmer.

The number of former Wallabies who tell you Jones is the best coach they played under is quite staggering. Others say he's the master of putting the right staff around him.

As Wallabies coach, he signed the likes of Mat Rogers, Lote Tuqiri and Wendell Sailor. When coaching Japan, he introduced rugby league plays and philosophies to help simplify the game for the emerging rugby nation. 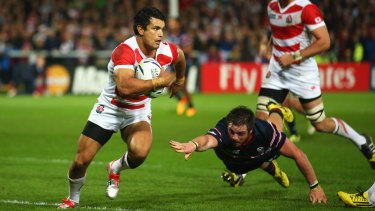 Craig Wing played for Japan under Jones at the 2015 Rugby World Cup.Credit:Getty

Former Souths and Roosters half Craig Wing played for Japan at the 2015 World Cup when Jones' side famously beat South Africa in their opening pool match. He found a rugby coach obsessed with rugby league.

"We went into a five-month camp before the World Cup and he drove us hard," Wing said. "We stayed at a luxury golf resort in Japan, but we were too tired to play golf because we trained from 5am to 5pm. You'd see Eddie in the morning and he'd ask, 'Did you watch the Roosters v Storm game last night?' He loved it.

"He adopted a lot of rugby league in our plays. He wanted us to run the ball, to not spend any time at the breakdown. And it worked for us."

Should Jones eventually come to rugby league, it would have to be at the right club; not just one that could afford him but also a strong, capable coaching staff underneath him.

There aren't many clubs with pockets that deep. There also aren't many prepared to spend upwards of a $1 million on a coach who has spent a lifetime in another code.

If Jones finally gives into his rugby league fetish, if he wants the itch scratched, he'd be better off holding out for a start at his beloved South Sydney.

Hang on ... What's that? He's already been linked to that club, too.

If Barrett does sign with Canterbury as expected, it will be up to Panthers coach Ivan Cleary to decide if he can go early – or stay until the end of the season.

A clause in Barrett's contract with the Panthers means he can't go early, but club officials say the call will rest solely with the coach. Barrett has been reborn at Penrith and doesn't want to leave them in the lurch, especially with them in premiership contention.

He's been heavily linked to the Wests Tigers because of his close association with coach Michael Maguire, who also coaches the Kiwis, but they need to move some big-name players before they can accommodate a marquee signing like Foran.

There's been wild speculation for weeks that NSW Deputy Premier John Barilaro wants to become the next chief executive of the NRL. Barilaro deflected but wouldn't deny the claim when cornered last month on Sky News.

It's gibber-jabber because interim boss Andrew Abdo will be officially appointed when the ARL Commission meets next month. 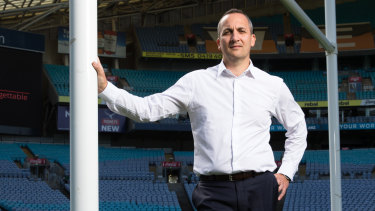 Abdo has done a superb job since taking over from Todd Greenberg.

There's no spin, no fluff, and he makes tough calls. The way he imposed further sanctions on Manly prop Addin Fonua-Blake for his tirade at referee Grant Atkins was a demonstration of strong leadership.

He's also got the clubs and players on side – for now.

What isn't commonly known is how close Abdo went to leaving the NRL before the COVID-19 crisis struck.

He was in serious negotiations about a return to the corporate world but stayed on and is now poised to slide into the big office at League Central.

Some of the biggest names in Australian sport are packing their PJs for this year's Sleepout on the SCG on August 3.

The annual fundraiser run by The Chappell Foundation raises money for homeless youth. You can donate at: www.thechappellfoundation.com.

"We call 'shoelaces' and a prop bends down to ties his shoelaces and everyone has to stop." — Matt Toomua reveals how teams forces stoppages in rugby matches. Sounds like certain people I know when it's their turn to shout.

The Canberra Raiders are a class organisation. When told about Cassandra Brandon, a 29-year-old fan at St Vincent's Hospital who required a bilateral lung transplant due to cystic fibrosis, they fired off a signed jersey in no time.

It's a big weekend for …

the A-League with 27 matches being played in 28 days to complete the regular season. It's an A-League clearance sale! A-League matches, out they go! Sydney FC play Wellington on Friday night.

It's an even bigger weekend for …

Supercars driver Scott McLaughlin, who can surpass the legendary Peter Brock's record of 48 race wins if he sweeps the Sydney SuperSprint series this weekend.

CSKA is ready to offer 7 million euros for defender Fuchs. Internacional wants 10 million^. CSKA intends to acquire the Central defender of Internacional Bruno Fuchs, who is also claimed by Monaco and Lille
Goretska Pro 8:2 with Barca: This is only the first of three steps
Matteus on the defeat of Barca: it is Painful to see what happened to the team that inspired us for so many years
Bartomeu met with Pochettino this week. He could replace Sethien at Barca
Salihamijic Pro 8:2 with Barca: Bayern are very happy, but they want more
Recently, Mueller did not want to renew his contract with Bayern. Now he's turning the football around
The baby may get angry and leave. Luis Suarez Miramontes about Messi
Source https://www.theage.com.au/sport/nrl/i-m-focused-on-england-jones-won-t-be-scratching-league-itch-before-2023-20200716-p55cr5.html?ref=rss&utm_medium=rss&utm_source=rss_feed