Nathan Cleary will shoulder the blame for NSW’s stunning game one loss while using Cameron Munster’s heroics as inspiration to dig his state of a hole to snap a 17-year State of Origin hoodoo.

As NSW coach Brad Fittler leapt to the defence of his No.7, a candid Cleary said he copped a “reality check”, with the Blues needing to win game two in Perth and a potential series decider in Brisbane to retain Origin supremacy.

NSW have not won a series decider at Suncorp Stadium since Andrew Johns’ 2005 masterclass.

Cleary, who lost only his third game at either NRL or Origin level in the last two seasons, had arguably his worst performance in a Blues jersey in a series-opening 16-10 loss to Queensland on Wednesday night - and he was quick to put his hand up despite playing behind a struggling forward pack.

“I didn’t play well enough and that affects the result,” Cleary said. “It is on me to get better, and if I am better the rest of the team is too.

“You have never fully got the game worked out. You think you are going alright and then a game like this happens. Sometimes it is not a bad thing. 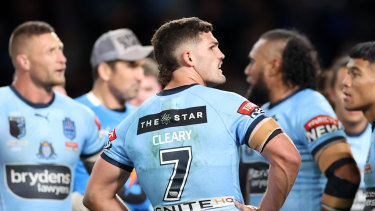 Nathan Cleary and the Blues gather under the posts after conceding a try.Credit:Getty

“It is a reality check that I need to get better, but win or lose [I’ll] get in the next day and I will keep striving to get better - and it is no different this time.”

Queensland’s defence swarmed Cleary on last-tackle kicks all night, and were helped by dominating the ruck, which was the main difference between the teams according to Fittler.

But the coach, who handed Cleary his Origin debut as a 20-year-old in 2018, was quick to protect his halfback as he tries to find a winning formula for game two in a fortnight.

“He was good,” Fittler said when asked about Cleary on Thursday. “I don’t think we had very quick play-the-balls. I spoke to him after the game and he wasn’t that happy with his kicking. Apart from that, he was very strong in every other part of his game.

I spoke to him after the game and he wasn’t that happy with his kicking. Apart from that, he was very strong in every other part of his game

“It would be good [if we can get him quicker ball], I think everyone would like that. It doesn’t always happen, sometimes you’ve got to work out how to do it without it.

“He wasn’t that far off. Isaah Yeo was about a metre [away], Jack Wighton nearly scored at the death. At the end of the day, we were a pass away from going into extra time. He did what he had to. I was happy with both [Cleary and Jarome Luai], and I thought they contributed highly.

“They were two evenly-matched teams and it ended up 16-10. I suppose the best player on the field was Cameron Munster. I don’t think that much went wrong.”

Munster’s second-half magic tricks - in which he danced through the Blues defence to set up a subsequent Daly Cherry-Evans try - included twice executing one-on-one steals with the Maroons grimly defending their lead.

“In Origin you have got to take your moments,” Cleary said. “I thought Cam and Daly did really well, so I have got to do what they did.

“Any time the team loses I will take that personally and I definitely didn’t play well. It is a lesson. I can’t change it now, but I can change what I do leading into the next Origin, or the next club game.”