‘I wasn’t knocked out’: Yeo opens up on contentious tackle

Isaah Yeo is adamant that officials made the right call in not taking him off the field over a potential concussive hit, declaring he wasn’t knocked out in the opening tackle of the game.

Yeo was involved in the two biggest talking points of the game, the first and last tackle. The former was perhaps the most spectacular and controversial opening collision to a big game since the 2014 grand final. Yeo, looking to make a statement tackle as Josh Papalii took the opening hit-up, got his head in the wrong position and the pair clashed heads. Yeo, who appeared to hit his head on the ground after the initial collision, came out of the hit second best.

It immediately sparked debate over whether he should have gone off for a head-injury assessment, but the Blues lock believes the protocols were properly followed.

“It was obviously a big one on Papalii there, but I felt fine,” Yeo said.

“I remember everything, I’ve been knocked out and it definitely wasn’t that. I just lost a bit of balance.”

Asked if he thought he would be removed from the fray, the Panthers forward said: “I thought, because I was trying to get my footing, that I would be a chance with the independent doctor and all that sort of stuff.

“When you’re knocked out, you don’t remember anything and I remember absolutely everything. I remember the play [making contact with] the wrong shoulder, all of that sort of thing. It was all good.

“The head feels fine, no stress.”

The TV cameras cut away as Yeo tried to regain his feet, but the Panthers forward appeared to stumble in his first few steps. Replays of the incident weren’t immediately shown during the broadcast.

“He stumbled,” Andrew Johns said on the Nine broadcast. “I thought if you stumbled, you’re automatically off.”

Blues trainer Travis Touma came on to assess Yeo and deemed him fit to remain on the field. The independent doctor, used for the first time in a State of Origin encounter, reviewed the incident from the bunker. After checking the available replays, Yeo was cleared to play on.

Asked about losing his balance, Yeo said: “Just the contact, I reeled out of it and I was just trying to get my footing to get back in the line. It’s all fine.

According to the NRL’s concussion protocols, “if the player exhibits or experiences any of the following clinical symptoms or signs (in the context of a possible head injury) the club medical officer must conduct a full clinical examination and assessment for concussive symptoms. The tools to be used are a SCAT (SCAT5) and a full cervical and neurological examination.

“Possible motor incoordination (e.g. balance disturbance, clumsiness or fumbling with upper limbs or struggling to get up).”

The bunker ruled it was a category-three incident, a classification that requires a trainer check. Once Touma cleared Yeo, the matter was closed for the evening. Debate will rage long afterwards over whether that was the correct call.

The incident had echoes of the opening hit-up in the Souths-Bulldogs decider seven years ago, when Sam Burgess was involved in a sickening head clash with Canterbury counterpart James Graham.

Burgess played on, despite being told the facial injury could have resulted in him losing an eye, and won the Clive Churchill medal to etch his name into grand final folklore. Under the current concussion protocols, he would have been immediately removed from the fray. 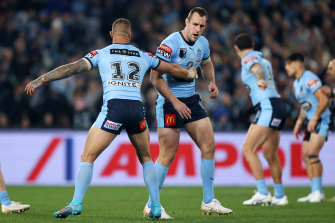 Isaah Yeo of the Blues stumbles after being hit while making the opening tackle.Credit:Getty

Johns wasn’t the only luminary shocked that Yeo wasn’t taken from the field for a head injury assessment. The incident set social media ablaze, with commentators across the game also questioning the decision.

Queensland coach Billy Slater would not be drawn on the incident. “That’s not my concern,” he said after the match. “As the coach of Queensland, I try to focus on what I can control for my team.”

Yeo made an uncharacteristic error when he dropped the ball in the 10th minute, but appeared otherwise unaffected throughout proceedings.

He almost stole the game in the final play when brought down agonisingly close to the Maroons’ tryline.

“It opened up and I thought I was a chance of sneaking over,” Yeo said.

“It was a good tackle with Ponga coming over the top late. As I was playing it, I thought we’d get the penalty but it was right on the siren. That’s the way it goes. They won big moments, scrambled well and obviously got the result.”

Christian Welch and Cameron Munster were both sidelined after suffering head knocks in the 2020 interstate series.