I am a Shore Old Boy. I spent most of my schooling - 1990 to 1999 - taking advantage of its opulent facilities, yelling its chants at the rugby or rowing and singing its hymns in the chapel. I was the school’s valedictorian, I opened the bowling for the First XI, and I achieved a pretty decent UAI. Yet I never quite felt at home inside the school gate. That leaked muck-up day list reminded me why.

I was shocked like everyone at the abhorrent nature of that list, especially the challenges inciting violence against others and predatory behaviour towards women. There is no evidence Shore boys carried through with any of the challenges, thankfully, but what I found really unnerving was the fact this list was premeditated - the vile language deliberately chosen, the document disseminated to anyone interested. Worse, it now appears this list has been passed to incoming Year 12 students since 2017. There is a viciousness to it all that is disturbing from teenage boys. Weekend reporting revealed similarly atrocious muck-up day plans at other expensive, single-sex private schools on the north shore. 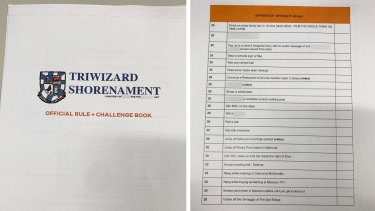 The "Triwizard Shorenament Official Rule and Challenge Book". Police were alerted after Shore School became aware of the students' plans.

Upon discovering the list, Shore headmaster Timothy Petterson wrote to parents denouncing it, saying the authors were not representing school values. "This is not who we are as a school," he wrote. "It is extremely disappointing to all of us that [the authors'] thoughtless actions have cast a shadow, not only over the considerable achievements of their classmates, but the reputation of our school generally which strives to be a respectful, inclusive and caring environment for all."

But a dare to break the law, damage property and humiliate or hurt others, without fear of consequences, speaks to the deeper problem that entitlement, privilege and elitism instils in young people at this and similar schools. The list from Shore students even instructs them on how to evade repercussions if caught by police. It treats the rest of the community as one giant sandpit to play in, with no regard for anyone else. Boys living in privilege must learn to appreciate it and turn it into a positive force for doing good, not treat their advantages as giving them superiority over others and immunity from consequences.

I’m also worried that these young men have a deep misunderstanding of masculinity. Healthy masculinity is not offensive bravado, feigned fearlessness, hurting or intimidating others, preying on women for fun, and it’s not conforming to a pack mentality. When I left the school, I was equally clueless about masculinity. I took away outdated, offensive attitudes that I’ve spent 20 years unpacking and rejecting.

I feel a deep sadness for all those Shore students, on the verge of entering the adult world with all the wrong messages about what it takes to be a man. Many of them will carry unhealthy attitudes and values forward into universities, workplaces, relationships and family homes. They’ll harbour unconscious biases that may take decades to confront. I’m proof of that. 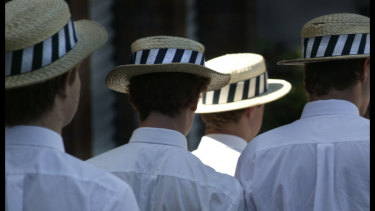 Shore said the list was not indicative of the values it taught at the school.Credit:Jim Rice

So what now? To expel the boys associated with the list is to act with all care and no responsibility. Shore must do better preparing young men for 21st century adulthood and a world pursuing gender equality and social inclusion. It must examine the culture it cultivates inside its gates. It needs to better understand the opinions, attitudes, assumptions and biasesits students hold towards other people and communities. The culture Shore is enabling manifests in locker rooms, playgrounds, in the videos and memes shared on social media and in the lists passed between students for muck-up day.

Shore should commission independent reviewers to come in and create a safe space for students to speak frankly of what they hear and see from peers, parents and staff. This would help get to the bottom of the attitudes that lead to that vile muck-up day list and chart a way forward.

Perhaps my old school has changed since the 1990s and this incident is the act of an unrepresentative few. I’m not convinced. That’s why I haven’t put my baby boy on the long enrolment waitlist for the school. I don’t want him experiencing the culture that I did.

Rob Sturrock is a gender equality and fatherhood advocate and author of Man Raises Boy: a revolutionary approach for fathers who want to raise kind, confident and happy sons.

Hans-Dieter flick: I Hope Alaba will sign a contract with Bayern. Our club is one of the best in the world
Diego Maradona: Messi gave Barca everything, brought them to the top. He was not treated the way he deserved
Federico Chiesa: I hope to leave my mark in Juve. We will achieve great results
The Coach Of Benfica: I don't want us to look like the current Barcelona, it has nothing
Guardiola on returning to Barca: I'm happy at Manchester City. I hope to stay here
Fabinho will not play with West ham due to injury
Ronald Koeman: Maradona was the best in his time. Now the best Messi
Source https://www.smh.com.au/national/nsw/i-went-to-shore-but-i-m-not-sending-my-son-there-20200927-p55znt.html?ref=rss&utm_medium=rss&utm_source=rss_feed

'No help': Voters finish off PM's fight with Queensland Premier

‘WE’RE ON TRACK FOR THAT’: When masks can stop being mandatory

Trampoline park at the centre of a growing coronavirus cluster

US election, COVID-19 surge in Europe point to volatile week ahead for markets

A different emergency: how Ambulance Victoria failed its own

From the Archives, 1948: Controversy over first Melbourne Cup photo finish

Sean’s rise from milkman to megastar

Biggest typhoon of the year to hit Philippines, one million evacuated

Strongest typhoon of the year to hit Philippines, one million evacuated