A western Sydney independent school has committed to train staff in disability awareness as part of its settlement in a case brought against it by the family of an expelled student with autism.

Catherine Blundy, who has autism spectrum disorder, was seven-years-old when she was expelled from The Lakes Christian College in Castlereagh, near Penrith.

Her parents filed a claim in February against the school in the Federal Circuit Court alleging a breach of disability discrimination laws, the Herald reported last week. 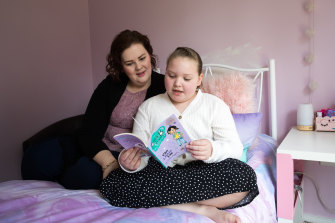 Catherine Blundy, who has autism, was expelled from her private school when she was in year 2. Credit:Edwina Pickles

They alleged Catherine was suspended, banned from the school bus and then expelled because of her disability, and argued the school failed to provide her with the particular types of support in class she needed.

That support included strategies to help her calm down when she was triggered, such as time-outs and breathing techniques.

The case was settled on Thursday before going to trial, with The Lakes Christian College agreeing it would take into account the need for disability awareness training at the school.

The school will also consider a comprehensive review of its behaviour management policy to "reflect best practices for educating students with disability", according to a public statement made with the Blundy family.

"The College acknowledges the different needs of autistic children in accessing education, and looks forward to further developing their support of all students, including those with disability," the statement said.

Solicitor Chadwick Wong from the Public Interest Advocacy Centre, which represented the family, said the settlement was "a great outcome for [mother] Hannah and Catherine, and for all children with disability and their parents who just want to be able to access an equitable and inclusive education like their peers".

"We hope that this case will give hope to students struggling to get the support they need at school, and encourages families to be strong advocates for their children," he said.

Students with a disability report experiencing high rates of exclusion, bullying and restraint within the mainstream education system.

NSW Department of Education figures show seven out of 10 suspensions of kindergarten students in the four years to 2019 involved students who needed some kind of adjustment to accommodate their disability.

The department has said it is concerned about the high number of suspensions among students with a disability, and launched a review of its discipline strategy and suspension policy a year ago.

But similar figures are not available for private schools, which are not required to report suspension data.

Catherine's mother, Hannah Blundy, said she hoped her daughter's case would show the diversity of people with autism spectrum disorder and ensure children have adequate support.

"Autistic people are a very special part of our community. We hope that we have been able to highlight that someone with autism is simply different, not less."

Barca presidential candidate Font about 2:8 from Bavaria: Humiliation. No need to prolong the agony, Bartomeu-resign
Frankie de Jong: Barca have a lot of problems, the match with Bayern showed that. A lot of things need to change
Philippe Coutinho: it was unusual to Play against Barca, but I have a contract with Bayern
Bartomeu does not intend to retire after 2:8 from Bayern
Bayern punished Barcelona for an 8-man defense. In this match, Messi was the problem, not the solution
L'equipe put Setien one for 2:8 with Bayern. For the first time, such an assessment was received by a coach
Pozornik! Barca fans met the team at the hotel after 2:8 from Bayern
Source https://www.smh.com.au/national/nsw/independent-school-settles-court-case-after-expelling-student-with-autism-20200709-p55ane.html?ref=rss&utm_medium=rss&utm_source=rss_national