Adelaide trainer Gordon Richards will start a three-day journey from Adelaide to Sydney with star sprinter Gytrash on Sunday after securing the Inglis slot for The Everest.

Richards signed up Gytrash for the Inglis slot for October's $15 million sprint on Friday, which delivered a knockout blow to other slot-holders who had been negotiating with the Lightning Stakes winner. 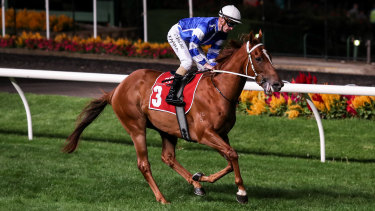 Lightning Stakes winner Gytrash will run in the Inglis slot in the $15 million Everest in October.Credit:Getty

"They come over the top with the offer and it was the most excited I have been in racing other than when he won the Lightning Stakes," Richards said. "It's not every day you get into a $15 million race.

"We were coming over to Sydney on Sunday with the hope of getting in The Everest, now we're in.

"The horse has come back in terrific order, we really couldn’t be happier with him, he’s matured again, he continues to fill out and I think this is going to be the prep he really announces himself as one of the best – if not the best – sprinter in the world."

Gytrash is the third horse to secure a slot in The Everest with Nature Strip to run in the TAB slot, while Classique Legend will take the slot that his owner Hong Kong billionaire Bon Ho bought from the Australian Turf Club.

He is the last horse to beat Everest favourite Nature Strip on the track when he won the Lightning Stakes in February and was also runner-up in the Goodwood in Adelaide in May.

He will have a course proper gallop at Morphettville on Saturday before starting the long journey to Sydney, where he has to avoid Victoria.

"I’m driving him myself because all the transport companies go through Victoria from here [in Adelaide]," Richards said. "It five and a half hours to Broken Hill on the first day then eight hours to Dubbo the next day before we make the final run into Sydney.

"I have to prove to the stewards that I took that path and once I come to Sydney I have to stay because I will need to do two weeks in quarantine to get back into Adelaide because of COVID.

"He will run in the Concorde Stakes at Randwick on September 5 and then I will decide if I can get back home."

Richards has booked Jason Collett to ride Gytrash right through his campaign for The Everest. Part of deal will see Richards make a home at the William Inglis Hotel with Gytrash to be stabled at Clare Cunningham's Warwick Farm stable.

Gytrash was a $40,000 purchase at the Inglis Melbourne Premier Sale and beat a talented field considered by the auction house, including Loving Gaby and Rubisaki.

"Gytrash ticks all the boxes, he’s proven at the top level, his on-speed racing pattern is favourable, he’s proven on both dry and wet tracks and in 19 career starts he’s only been out of the top three once,’’ Inglis managing director Mark Webster said.

"He really has become a giant killer of racing, you only need to look at the scalps he accrued during his autumn campaign to see that on his day, he is at the very least every bit as good as the other leading sprinters around.

"He’s a lightly-raced five-year-old who we believe is the best up-and-coming sprinter in the country and we can’t wait for these next two months as we target the Everest with Gordon Richards and Gytrash’s connections."

Andy Cole on £ 109m for Sancho: it's crazy money. Manchester United will not spend them at random
Juventus loaned Luca Pellegrini to Genoa
Palace, Brighton and Sheffield want to buy Brewster. Liverpool ask for 25 million pounds
Milan have offered 4 million euros for the striker Bodo-Glimt Gauge. He scored them in the Europa League
Atletico showed a photo of Suarez in three sets of uniforms
Lemar is Interesting to Leipzig
Chelsea midfielder Loftus-cheek is wanted by West ham, Southampton and Aston Villa
Source https://www.theage.com.au/sport/racing/inglis-gets-gytrash-for-the-everest-now-the-trek-to-sydney-begins-20200814-p55lv9.html?ref=rss&utm_medium=rss&utm_source=rss_feed