Sydney Rugby Union boss Phil Parsons says Saturday’s events at Eastern Suburbs Rugby Club were “a shame” but made it clear crowds will be allowed at this weekend's opening round of Shute Shield games and urged fans to adhere to strict social-distancing rules.

Police were called to the club on Saturday afternoon, due to social-distancing concerns, during a trial match against Sydney University. 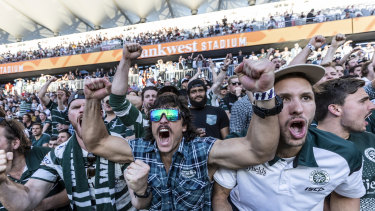 Easts president John Murray was quick to defend the event, saying social-distancing measures were in place. A disgruntled local resident took photos of spectators standing close to each other at the match.

Parsons believes it was a licensing issue.

“My phone hasn’t stopped ringing since Saturday afternoon. It’s just a shame,” Parsons said. “That’s a licensing problem, not a licence to play rugby problem. They’ve got a bar licence … others don’t all have that, they have event licences. 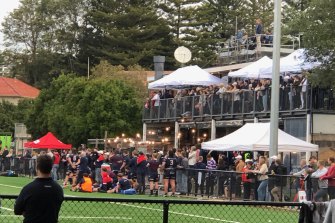 “Those people at Easts didn’t do the right thing by their club. We don’t have police everywhere to keep people apart.”

Round one of the Shute Shield kicks off this weekend and all six venues - Chatswood Oval, Manly Oval, Coogee Oval, Forshaw Rugby Park, Pittwater Rugby Park and Drummoyne Oval - will enforce strict rules when fans enter. 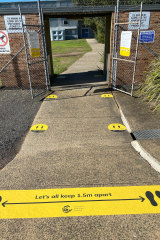 COVID-19 signs are ready to go at Pittwater Rugby Park.

All tickets have to be purchased online and numbers will be restricted depending on the size of the ground and facilities. For example, Randwick said on its website 500 tickets would be available but that number could change as the week goes on. 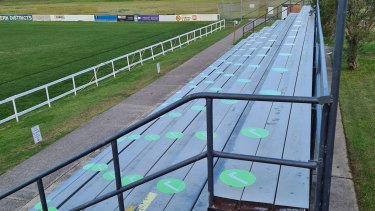 All clubs received a COVID-19 starter pack from NSW Rugby Union and the SRU. Supporters will not be allowed to stand around once they have been served alcohol and food. Green stickers will also be put in the stands to ensure people are spread out.

Hundreds of litres of sanitiser spray and disinfectant will be available, and volunteers will make sure people keep their distance.

Parsons said supporters owed it to their clubs to do the right thing.

“The punters have a social contract with us too, they have to do the right thing too,” Parsons said. “You come in, buy a beer and a pie, and you walk back. There’s nowhere to loiter in corridors or stand around the bars. We’ve got heaps of signage, hand sanitiser and rules in place. We’ve all met with council, we all have COVID protocols and everything is ticketed.”

Ex-referee Andujar Oliver on Saul's fall: there Was a light touch of the goalkeeper, but it was not a penalty
Alfonso Davies: As a child, I adored Messi, and now I will defend against him
Mesut Ozil: you get Disappointed when you know how good you are, but they don't let you out
Rummenigge on the match with Barca: Davies will take care of Messi. Alfonso has not been beaten this season
Flick about the Champions League match: This is not Bayern against Messi, but a game against Barcelona
Xavi: Setien's Barca Game is very similar to Cruyff's style
Coutinho's agent: Philippe is eager to play with Barca and win the Champions League
Source https://www.smh.com.au/sport/rugby-union/it-s-a-shame-club-rugby-boss-urges-fans-to-do-right-thing-after-packed-trial-game-at-easts-20200713-p55bnx.html?ref=rss&utm_medium=rss&utm_source=rss_feed

When I started to go grey a few years ago, I made a personal decision

Fun to be had if you find the right wave

APPLY NOW: 25+ Coast jobs listed in the past three days

’Without warning’: Man walks free after punch outside bar

SEQ water alert: Restrictions could be back by February