To mark 20 years on air together, radio shock jock Kyle Sandilands and his co-host Jackie 'O' Henderson will feature in an emotionally charged 60 Minutes profile this evening.

The report by Karl Stefanovic was filmed over a six-month period in both Sydney and Los Angeles. While Sandilands often oversteps the mark on his radio show (remember when he called the Virgin Mary a liar?), Henderson tells Stefanovic it's not her job to keep him in line. 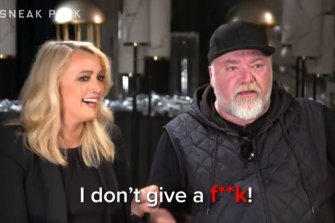 Kyle and Jackie O reflect on their 20-year career.

"I'm not his mother. It isn't my responsibility to always pull Kyle up. He's a big boy. He knows what he is doing. If I feel he has crossed the line, I will definitely pull him up on that and I think I am less afraid to do that now."

The promo teases a big health 'reveal' from Sandilands, whose absences from work have been a hot topic in recent years. He also confirms he's looking for love. 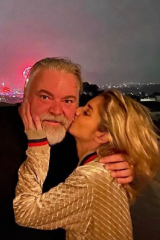 "I'm the kid who was thrown in the gutter at 15 . . . I'm always looking for someone to love me back. I've got a lot to give but, you know, I want it back. Probably more than I want to give."

After splitting up with his partner of eight years Imogen Anthony last year, Sandilands is now dating his former personal assistant Tegan Kynaston.

As Australia's most successful radio partnership, Kyle and Jackie O haven't been without their share of controversies. They caused a national uproar in 2009 when a 14-year-old girl brought onto the show by her mother was strapped to a lie detector and then revealed she had been raped.

"There's no way I would do that now. If someone suggested that as a segment I would know, no we are not putting a young girl on a lie detector," admits Henderson. 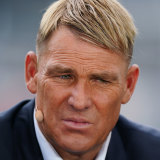 Staying home for the past ten weeks hasn't been all online poker games and hanging out with pretty girls on Houseparty like you might expect for famed cricketer Shane Warne. Instead, the spin king has been isolating with his three kids Brooke, Jackson and Summer.

"Spending time with my kids has been great and I think that's one of the silver linings COVID-19 has had on families," he tells Emerald City. "It's the first time in 30 years I've been in the same city for this length of time, so I've actually enjoyed it."

Warnie did the media rounds last week to spruik the free consultation Advanced Hair is offering people who have suffered hair loss from coronavirus. "I used to be self-conscious and wear a cap because I didn't want people to see my bald spot or where my hair was thinning," he admitted.

Warne began treating his hair loss with ‘Advanced Laser Therapy' way back in 2006. "I don't have bad hair days any more because I have a full head of hair again."

The show must go on

While the future of some reality television shows remains in limbo, The Voice Australia will resume filming next month. International stars Kelly Rowland and Boy George have returned for the series' ninth season, joining local talent Guy Sebastian and Delta Goodrem. 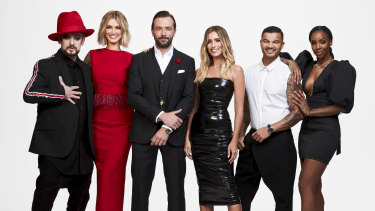 Boy George, Delta Goodrem (left) and Guy Sebastian and Kelly Rowland (right) are all returning as coaches on The Voice.

Given the coronavirus travel restrictions, there has been a lot of speculation about how the international coaches will be involved this time around. A Nine spokesperson scotched rumours Rowland and Boy George would be replaced.

"We can confirm all four coaches will remain in their roles for the entirety of the season. In previous years we have had guest mentors come in to assist coaches in the latter part of the season, and that is just one possibility we are looking at for this season, however, no decisions have been made."

Darren McMullen's co-host Renee Bargh is due to land back in Sydney from Los Angeles this week to continue filming the singing competition. Like other returning Aussies, Bargh will be quarantined for 14 days in a hotel. The physical staging of The Voice has been amended to comply with COVID-19 restrictions and contestants won't perform to a live audience. The Voice will debut tonight. Nine owns this masthead.

Nice joined the fight for defender Olympiakos Tsimikas. Loco is Interested in Him
Lacazette has rejected the offer of Inter. He can be traded to Atletico for Lemar
Former CSKA chief scout: 99% of a scout's work is wasted. This is a specific feature
Victor Valdes led the club from the Spanish 4th League
Agent Jorginho: Two non-Italian top clubs contacted me
Atalanta defender Castan is of Interest to Tottenham, Leicester and West ham
Captain Valeika was born in Moscow. Russian Russian mother, father-conductor, performed with Celine Dion and still supports Spartak
Source https://www.smh.com.au/culture/celebrity/jackie-o-i-m-not-kyle-s-mother-20200521-p54v2u.html?ref=rss&utm_medium=rss&utm_source=rss_culture

Wembley mother attacked as her five-year-old slept beside her: police

Nurse's union defends Blackwater trip, says she could not have infected miner

'He's given us plenty of confidence': Dufty forces McGregor to retain him

Water market may not be 'good thing for the country', Basin chief says

Government must do ‘much better’ to support Australians: Albanese

$8m sale in eight hours is just what the doctor ordered

Former Triguboff lawyer claims he was sacked for refusing to lie

Church volunteer, 79, jailed for sexual offences dating back to 1950s

‘No Justice, No Peace’: Protesters March in New Mexico Over George Floyd Death

Coronavirus is launching us into a new era of poverty, turmoil and conflict

Attenborough to set out vision for future in new book

Down to just one COVID-19 case, NZ is moving to stamp out STIs

Nurse’s story ‘changed so many times’

Australian pubs face a long road back after lockdown

'When manufacturing goes, it goes': Union warns sector under pressure

High Court releases letters exchanged between the Queen and Kerr

'Super stoked': Seasonal snow fiends hyped for season like no other

Trump doesn't care if he wins his fight with Twitter, he just wants the battle

Home is where is the heart is: long-distance love affairs

Portraits of the artists in isolation

How your club is shaping up for the AFL season restart: Part one

Couple hit back at age-gap slur

Warmer nights but rainy days to come in Queensland this winter

New order on Monday: Victorians must keep working from home

'She's fearless': Pansy Ho under pressure as she takes charge of $23b empire after death of gambling king

Job losses continue to mount in US despite reopenings

Tatt's it – zombie woman and the lotus flowers are going, going gone

'We're a deeply divided society': inside the battle for Hong Kong