A $200 a fortnight boost to pre-pandemic unemployment benefits for more than 1.5 million Australians would cost the budget almost $4 billion over six months on top of the $11.7 billion bill the Morrison government is already facing.

Modelling of possible increases to JobSeeker once the $550-a-fortnight coronavirus welfare supplement ends, by Bankwest Curtin Economics Centre, reveals Treasurer Josh Frydenberg is looking at a blowout in costs even without changes to unemployment payments. 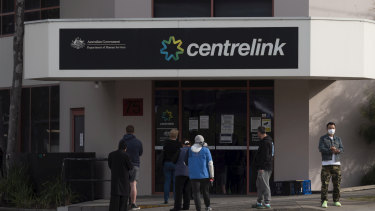 A $200 a fortnight boost to unemployment benefits would help more than 1.5 million people and cost the budget less than $4 billion over 6 months.Credit:Rhett Wyman

Centre director Alan Duncan said the coronavirus supplement was a necessary response to the pandemic but it had to be adjusted down to provide an incentive for people to work. However, he said the pre-pandemic base rate of JobSeeker was unable to provide an acceptable basic standard of living.

"The cost of raising JobSeeker and related payment rates, principally Youth Allowance, by $200 per fortnight is relatively inexpensive, at around $3.8 billion over the six months following withdrawal of the current coronavirus supplement," Professor Duncan said.

"The greater JobSeeker rate will alleviate poverty and mitigate the impact of the lost supplement from the end of September 2020."

The government is working on a post-September plan for many of its programs, with particular pressure not to return the JobSeeker payment to its pre-coronavirus level.

Business leaders, charities, unions and economists are increasingly concerned about the end of September when the $70 billion JobKeeper wage subsidy program and the $14 billion welfare supplement are due to end. Bank mortgage deferral periods are also due to finish.

This September "cliff" has prompted fears the economy could slump through the final three months of the year. Charities this week said they are concerned about a surge in demand if all the support is ended.

The analysis prepared exclusively for The Sydney Morning Herald and The Age shows with expected unemployment levels, the government faces an $11.7 billion bill for the six months after September if JobSeeker returns to its pre-virus level, when it was known as Newstart.

The $11.7 billion bill is more than the full-year cost the government forecast in last year's budget and reflects expectations more than 1.5 million will be unemployed well into next year.

Continuing the $550-a-fortnight Jobseeker supplement as well as the original Newstart $565.70-a-fortnight rate would cost an extra $11.2 billion on top of that.

Lifting JobSeeker to $765.70 a fortnight, a 35 per cent increase on the pre-virus level, would cost the budget $3.8 billion in the six months after September. A $150 a fortnight increase would cost about $2.7 billion.

Another option – of lifting JobSeeker by $200 a fortnight for three months and reducing that to a $100 a fortnight increase – would cost $2.8 billion over six months.

Professor Duncan said while the government had moved very quickly to put in place both the JobKeeper and the coronavirus welfare supplement, this had come at the expense of good policy design.

At present, people on JobSeeker can earn up to $1088.50 a fortnight, with the payment tapering down as earnings increase, but everyone who qualifies receives the full coronavirus supplement.

Professor Duncan said a person on JobSeeker who earned more than that lost any remaining JobSeeker payment as well as the full supplement. This "inevitably" reduced the willingness of people to accept more work hours.

"Shifting from the current supplement to an increase in the base JobSeeker rate is a small price to pay to remove the current distortion and to adequately support the thousands of Australians who are now counting on this support," he said. 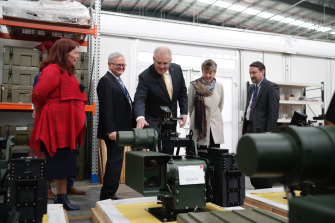 Scott Morrison, campaigning ahead of the Eden-Monaro byelection, says the government wants businesses to get back on their feet as quickly as possible.Credit:Alex Ellinghausen

Treasurer Josh Frydenberg, facing the nation's largest budget deficit of up to $200 billion, will outline the future of JobKeeper and JobSeeker when he delivers an economic update on July 23.

Conte will meet Marotta today. The coach was critical of Inter's management
Gunko can deliver Spartak football to Khimki. Ledyakhov about the new coach of the club
Partici about the future of Surrey in See: You can't evaluate the season as a whole based on the match with Lyon
Maldini on Milan's Interest in Aurier: We'll see what happens in the coming weeks
Hennessy on Bavaria: There will be no major transfers after Sana'a this year
Inter is considering Pochettino in the event of Conte's resignation (FC Inter News)
Former Roma coach Di Francesco can replace Zenga in Cagliari
Source https://www.smh.com.au/politics/federal/jobseeker-s-200-boost-could-cost-4-billion-for-six-months-20200702-p558bh.html?ref=rss&utm_medium=rss&utm_source=rss_feed

Top places to pitch a tent

The Sound gives Australian musicians a new voice on television

End of an empire: Hutt River to rejoin Australia after 50 years

'Shouldn't have been on the park': Rudan rails against Jets goalscorer

COVID-19 closures may cause childcare centres to fold, industry warns

Students shape own curriculum in 'new generation' of vocational schools

America loses it over a tomato

Blues Train close to the end of the line

'We felt intoxicated': playing Beethoven amid the pandemic

The Bucks stops: Collingwood's entitlement issue starts at the top

Fire sale could be Victoria’s cheapest

Lockdown 2.0 traffic heavier than in April but less than pre-COVID

'Clearly it's an advantage': Panthers, Parra draw not lost on Raiders

'Clearly it's an advantage': Panthers, Eels draw not lost on Raiders

Buy home near train station for under $500k

After the fires: rebuilding Minneapolis in the wake of Black Lives Matter

'No border is impenetrable': Premier says restrictions will help NSW

Finding a path through the labyrinth

No.1 with a bullet: Thomas back on top, Day sixth in Memphis

AFL journalist stood down for reporting on COVID breaches

Trump isn't in any hurry to save his economy

Backlash against British plan to play pop music in hospitals

From the Archives, 1970: 13-year-old Australian runaway found in Paris

Microsoft trying to buy TikTok after conversation with Trump

Tabcorp to take $1b write-down as COVID-19 crushes punting

School in Lockdown 2.0: calling all students