This could be the pace of Melbourne father of two Danny Whelan's days for the next six weeks if he loses his bid to be categorised as a "permitted worker" under the Victorian government's new stage four restrictions. 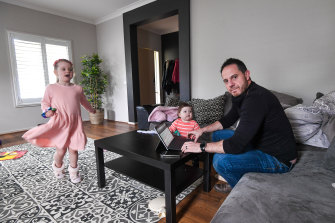 Danny Whelan with his children Phoebe, 5 and Pippa, 1. Mr Whelan says it will be "impossible" for him to look after his children while working full-time from home.Credit:Justin McManus

The new rules remove access to childcare for all but the vulnerable and households of permitted workers.

While Mr Whelan's wife Katie is a nurse - a permitted worker - he oversees a large-scale online software project for a government department from home.

As of Thursday - the first day of restrictions - the Whelan family was one of many in limbo over whether they qualify to access care for their children, Pippa, 1, and Phoebe, 5.

The Andrews government took until Wednesday evening to release the permission form parents need to gain access to care, while a detailed list of those considered "permitted workers" went live about midnight.

As a result, parents across Melbourne were caught out on Thursday with not enough time to file their paperwork to get children into care, with at least one centre only receiving a single child.

Mr Wheelan, from Eynesbury west of Melbourne, said he usually has back-to-back meetings from 8.30am to 5pm most days, with some meetings going for an hour or two.

"The ability for me to do that work as well as juggling the 12-month-old is going to be impossible," he said.

Mr Whelan is asking his HR department if he could be classified as a permitted worker due to the scale of his project.

If that approval is knocked back, home and work life is about to become overwhelming for the Whelan family.

"I'm just going to have to wing it and try go to my meetings as scheduled," he said.

"Hopefully Pippa can be entertained by Phoebe, but it's not really fair to have the five-year-old be the parent.

"The 12-month-old is dependent on me 99 per cent of the time. She might just have to be on my lap in meetings. She'll sometimes hold onto my leg and cry or sit on my lap and smack the laptop."

Parents reported a two-hour wait on Thursday as they sought clarity on the rules from the Health Department's dedicated childcare hotline.

"Between multiple doctors, engineers, teachers and government staff, we still aren’t clear on who can attend," she said.

"I work in government and even I thought 'God, I can't interpret this'," she said.

But another Doncaster East mother, who lives with a blood disorder and autoimmune issues, said she thought other parents were too focused on trying to find ways around the restrictions.

"I feel like people might be thinking, 'How can I get around these restrictions', rather than 'What can I do to drive down these [coronavirus] numbers?'," she said.

The mother, who did not wish to identify her family, works part-time in HR, while her husband works full-time in IT.

Both parents have been juggling their working lives while caring for three young children in three-hour shifts every day from 6am and 8pm.

"We literally tag team all day everyday," she said. During the three-hours bursts, one parent is locked in the home office working, while the other is caring for the children.

"I’m part-time so I’m trying to get five to six hours in a day in total, and my husband has to get eight hours in," she said.

"I’m fortunate in that I have an employer who is flexible, but that doesn't mean it's easy."

"We have zero breaks – we crash into bed at 9pm at night because we’re just exhausted."

Because her blood condition puts her at high risk if she contracts COVID-19, the Doncaster mother said she would be willing to take unpaid leave if she had to to take care of her children.

"Health really must come first," she said. "This [lockdown] has to work".

It's time to learn the names of new Borussia heroes. Now there are 17-year-old boys making goals
Paulo Fonseca: it's Important to bring Smalling back to Roma. We have only 3 Central defenders
Arteta about 2:1 with West ham: Arsenal made life difficult for themselves with losses, but they fought and believed in victory
Palace midfielder Townsend: Could have beaten Manchester United with a bigger difference. We had moments
Philippe Coutinho: I am motivated and I want to work hard to make everything work out well on the pitch
Torres on Chelsea: I Thought I could remain a top player, but I was unstable. Although there were enough successes
Neville on the broken penalty against Manchester United: an Absolute disgrace
Source https://www.smh.com.au/national/victoria/just-going-to-have-to-wing-it-parents-grapple-with-childcare-lockdown-20200806-p55j5s.html?ref=rss&utm_medium=rss&utm_source=rss_national