Wallabies great Phil Kearns will lead the charge to fend off the United States and potentially Russia in Australia's bid to host the 2027 Rugby World Cup.

Rugby Australia chairman Hamish McLennan hand-picked the two-time World Cup winner to head up Australia's bid, which will be decided in 2022 and could bring the third largest sporting event in the world to Australian shores for a third time. 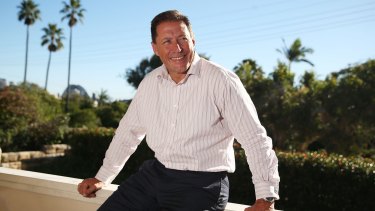 Phil Kearns will head up Australia's bid for the 2027 Rugby World Cup.Credit:Brendon Thorne

Kearns played 67 Tests for Australia and captained the Wallabies 10 times. He will serve as executive director on the bid team, which has only one other staff member at the moment, RA senior executive Anthony French.

"Phil has an impeccable international reputation both in the corporate sector and with his network of contacts throughout the rugby world," McLennan said.

"Phil will be front and centre of the Rugby World Cup bid team and will lead our international relations to put Rugby Australia in the strongest possible position to win the right to host the 2027 showpiece.

"As part of his role, Phil will be spend time overseas to be a key contact with the World Rugby Member Unions, to showcase our bid and to highlight why we would be a tremendous host in 2027."

Australia are the firm front-runners, but only in the absence of any declared rivals.

Russia has controversially announced its intention to bid for the tournament, but must first win an appeal against its four-year global sports ban in the Court of Arbitration for Sport.

No other country has announced it wants to join the bid process, which is expected to start next February and wrap up in May 2022.

But observers expect emerging rugby nation the United States to look seriously at the opportunity after being encouraged to do so by World Rugby last year. USA Rugby filed for bankruptcy earlier this year and may view 2031 as a better fit, allowing it more time to rebuild.

Kearns lost out to former RA boss Raelene Castle two years ago and was undecided about running to be her permanent replacement. This appointment appears to have parked his chief executive ambitions for the time being but will no doubt be seen as a strong audition if Australia wins the hosting rights.

"I’m very proud to accept the role and want to thank Hamish and Sir Rod for their consideration as we prepare our bid to host the Rugby World Cup in Australia in 2027," Kearns said.

"I know what it takes to win a World Cup on the field in Wallaby gold and now I’m enormously excited to put in the work to win the right to host a World Cup here in Australia.

"The World Cup in 2027 would be transformational for the game in this country. The financial windfall it would bring would spark the Australian economy as we rebuild from the impact of COVID-19 and then gives us the opportunity to invest back into the grassroots of the game."

Kearns starts on September 7 and will report into Rugby Australia.

Since his retirement from Test rugby he has held previous posts as Centric Wealth chief, as well as managing director at InterRISK Australia. He also serves as a director on the boards of AVJennings, Venues NSW and Coolabah Capital.

A tireless charity worker, the 53-year-old spent 12 years on the board of the Childhood Cancer Institute Australia and is now patron of the Zero Childhood Cancer campaign alongside former NSW governor Marie Bashir and David Gonski.

Kearns also started the ‘Balmoral Burn’ in 2001, which has since raised more than $30 million to buy equipment for Children’s Hospitals around Australia.