While the coronavirus pandemic has put a lot of small businesses under pressure, KIIS FM breakfast host Kyle Sandilands and girlfriend Tegan Kynaston have managed to grow their side hustle drinks enterprise. 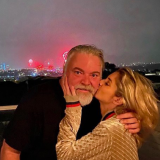 Nueva Sangria, a Spanish-inspired beverage created by the couple, has now acquired a permanent office space in Kings Cross. A Sandilands rep confirmed the site will serve as the brand's national head office. It also contains a tasting room for events and functions.

A property search shows Sandilands has set up shop in a building linked to his best mate, Kings Cross businessman John Ibrahim. The Bayswater Road address is owned by Wirlinga No 10 Pty Ltd, whose sole ­director and shareholder is Margaret Staltaro, Ibrahim's bookkeeper and so-called "work wife".

In his 2017 life story Last King of the Cross, Ibrahim described Staltaro as "like a wife without the sex or the cooking or cleaning. Just the arguing and nagging".

Nueva Sangria's new HQ is next door to Ibrahim's partner Sarah Budge's now-closed Crane Bar, also owned by Wirlinga No 10, and is the former site of burger joint Milky Lane, which had a brief stint in KX. 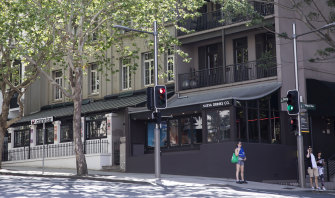 Kyle Sandilands' sangria brand now has its own HQ in the Cross. Credit:Dominic Lorrimer

In case visitors were in doubt about the shop's new occupant, a near life-size poster of Sandilands pouring a bottle of Nueva has been fixed to an inside wall.

Staltaro, meanwhile, lives three doors down from Ibrahim's clifftop bolthole in Dover Heights. In 2017, she escaped a conviction for drug possession, instead given a $400 fine for driving with the drug ice in her system, after character witnesses attested to her "loyal and compassionate" nature.

TV sporting couple quietly split
Less than twelve months after they tied the knot at a luxe wedding in the Adelaide Hills, Channel Seven star Abbey Gelmi and Sky Racing's Ben Way have split. Emerald City can reveal the pair separated in June; the House Rules starlet has been conveniently posted to Perth for her AFL hosting duties, where she is living with family. 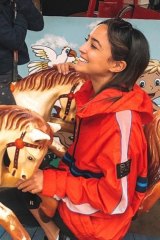 Suspicion surrounding the pair's marriage has grown in recent months after 30-year-old Gelmi removed her marital name from her Instagram bio and posted photos without her wedding ring.

Last September, the former Miss Universe Australia contestant denied rumours she had split with Way ahead of their wedding after appearing ringless during broadcasts. She insisted her diamond sparkler was being cleaned.

The bubbly Gelmi is a regular fixture on the social circuit, often hosting events for brands outside of her television commitments.

Friends confirmed the separation. Gelmi and Way did not respond to requests for comment. 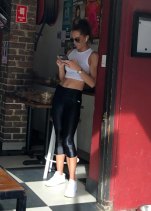 Kyly flying under the radar in a Bondi coffee shop.

Kyly shuns P.E. NATION in Pip’s backyard
Former cricket WAG Kyly Clarke made a bold statement when stepping out in Bondi last week. The 39-year-old mother-of-one kept her head down while awaiting a coffee in bustling Hall Street cafe, kitted out in Running Bare activewear. A daring move when everyone from Bondi to Bronte is dressed head to toe in the eastern suburbs unofficial uniform: P.E Nation.

Of course, Kyly could have her own reasons for avoiding that particular brand. It's no secret that her ex-husband, former Australian cricket captain Michael Clarke, is currently in a relationship with the P.E Nation co-founder and Bondi queen of cool Pip Edwards.

A glance at Kyly's Instagram account reveals a series of gym selfies and exercise tutorials in which she wears Running Bare and tags the brand in her posts.

So is her love of the label a subtle swipe at her ex's new girl, or a straightforward commercial relationship? A Running Bare spokeswoman refused to confirm whether Kyly is affiliated with the brand or merely a fan of its apparel.

As the most aspirational city in Australia, it is easy to see why Sydney is home to some of the country's most eligible men.

Johnny Ingham is now back on the dating scene after splitting with longtime girlfriend Rey VakiliCredit:Instagram

Heir to the Ingham chicken fortune Johnny Ingham (who works in the family business) recently found himself back on the dating scene after splitting with his longtime girlfriend Rey Vakili. A former assistant to American Vogue editor-in-chief Anna Wintour, Vakili also has links to the Waterhouse racing dynasty; her sister Hoda is married to Tom Waterhouse.

While it's rumoured to have been an amicable split, it's unlikely the 34-year-old Ingham will stay single for long, with friends describing him as "extremely fun" and "super-charming".

Another name added to the city's list of most eligible bachelors is the shaggy haired Charles "Chugga" Hinkfuss. The founder of boutique furniture store MCM House has design cred and exudes cool. His sister Lucy is married to Icebergs restaurateur Maurice Terzini.

Emerald City hears 35-year-old Hinkfuss - who originally hails from Melbourne - has moved to Tamarama (who can blame him?) and recently hosted a wild house party at his beachside pad that even boasts a sauna.

Also on the market is Toby O'Neil, baby brother to Ned and Jake O'Neil of the superyacht broking family who own Rose Bay Marina. The 29-year-old is the director of his father Denis' private development company.

Forward Alaves Joselu: Barcelona is one of the best teams in the world. But they can be beaten
In England, they want 25% of coaches and 15% of managers to be from ethnic minorities. Only Southampton did not sign up
Zlatan okovide: the Virus challenged me and I won. But if you are not Zlatan, then do not risk it and think with your head
Koeman on Griezmann: the goals will come, I have no doubt about it. It needs to continue to work
Maguire Pro 1:6 from Tottenham: It seemed like a crisis. We were devastated, we didn't expect this
Wenger on the European super League: the Premier League is superior to other leagues, they are trying to destroy this advantage
Barca presidential candidate Font: we need to bring back Pep, Xavi, Iniesta, Puyol to create a competitive project
Source https://www.smh.com.au/culture/celebrity/kyle-sandilands-takes-up-residence-with-john-ibrahim-s-work-wife-20200915-p55vwg.html?ref=rss&utm_medium=rss&utm_source=rss_culture

Deceit and cover-up are entrenched in Victoria Police culture

Reasons for delaying an integrity commission are blatant nonsense

As soon as I can, I'm getting the hell out of town. Then coming back

Teachers’ workload is their biggest challenge

Wednesday's car is top of the heap

No stage? No problem for this innovative opera company

Racing NSW launches investigation after racehorses continue to be slaughtered

Race-by-race preview and tips for Wagga on Friday

Sydney to Hobart gets green light after July COVID-19 scare

‘Not the man I knew’: Berry’s heartbreaking hidden battle

A new look leads the list in lockdown lifting spend-up

When can I take off my mask? Your COVID dining questions answered

Crows and Saints sweat on compensation, Broad set to stay a Tiger

'You only get one chance at a Golden Eagle': Funstar ready to swoop

Business calls on all Victorians not to flout COVID-safe rules

'Never to return to Sydney': Sam Ibrahim flown to WA as deportation looms

'I didn’t want him to go to jail': Cousins' ex-partner claims she reported him to police amid fears her children would be removed