By Tim Kelly and Sam Nussey

Kyoto: Many victims of an arson attack on an animation studio in the western Japanese city of Kyoto were young with bright futures, some joining only in April, the company president said on Saturday, as the death told climbed to 34.

Thursday's attack on Kyoto Animation, famous in Japan and overseas for its series and movies, was the worst mass killing in two decades in a country with some of the world's lowest crime rates.

Company president Hideaki Hatta said many of the victims were young women. 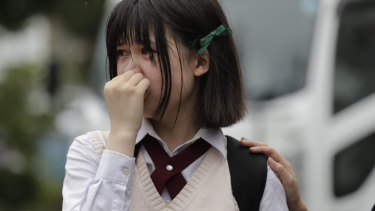 A woman sheds tears as she visits a makeshift memorial honouring the victims of Thursday's fire at the Kyoto Animation Studio.Credit:AP

"Some of them joined us just in April. And on the eighth of July, I gave them a small, but their first, bonus," he said.

"People who had a promising future lost their lives. I don't know what to say. Rather than feeling anger, I just don't have words." 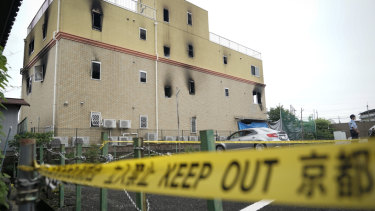 A police officer stands in front of the Kyoto Animation Studio building consumed in an arson attack on Thursday.Credit:AP

The studio had about 160 employees.

Police have confirmed the identity of the suspect as Shinji Aoba, but have declined to comment further after reports he had a grudge against the studio.

Aoba had been convicted of robbery and carried out the attack because he believed his novel had been plagiarised, NHK and other media have said.

But Hatta said he had no idea about any plagiarism claim, adding he had not seen any correspondence from the suspect. 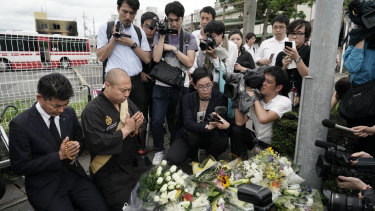 Police have not arrested Aoba, as he is being treated for heavy burns, NHK said, although they have taken the unusual step of releasing his name.

Two days after the fire, animation fans gathered near the burnt out studio to add to a growing pile of flowers, drinks and other offerings.

Bing Xie, 25, a Chinese student at Kyoto University, said she could not forgive the arsonist.

"The criminal who does this seems to have been mentally disturbed, but I can’t forgive him. The young people at Kyoto Animation were beautiful and warm and it is hard to accept they are gone."

Police guarded the site as investigators, some on the roof near where many died in a connecting stairwell, examined the blackened building. The smell of burning lingered over the quiet suburban neighbourhood.

Hatta said the building needed to be torn down because it was so badly damaged.

Tributes to the victims lit up social media, with world leaders and Apple Inc's chief executive offering condolences. The hashtag #PrayforKyoAni, as the studio is known among fans, has become popular.

Kyoto Animation, in a quiet suburb about 20 minutes by train from the centre of Kyoto, produces popular "anime" series such as the Sound! Euphonium. It is also known for Violet Evergarden, which has been shown on Netflix.

Icardi on leaving Inter: PSG-a step forward. I want to win trophies
Giress about the Best-2019 award: Mane should have been ahead of Messi
Lovestory Totti and Ilari Blasi: he dedicated goals to her in the Derby, she dissuaded him from moving to Real Madrid (and had a row with Spalletti)
Eric Djemba-Djemba: Pogba and Brunu would have sat in the reserves under Scholes and Keane
Klopp on the championship: I would never compare myself to Dalgliesh and Shankly
Dimitar Berbatov: Earlier it was about the championship of Manchester United, now it is about the top 4
Zidane wants to see Mane at Real Madrid, but the club cannot afford this transfer
Source https://www.smh.com.au/world/asia/kyoto-animation-studio-boss-at-loss-of-bright-young-staff-20190720-p5292q.html?ref=rss&utm_medium=rss&utm_source=rss_feed