A fit and refreshed Nick Kyrgios says he's ready to bury the hellish injury memory that marred his 2017 Wimbledon campaign.

Concerns about an elbow problem in his serving arm saw the world No.23 withdraw from the French Open on the eve of his scheduled first-round clash with former Australian Davis Cup teammate Bernard Tomic. 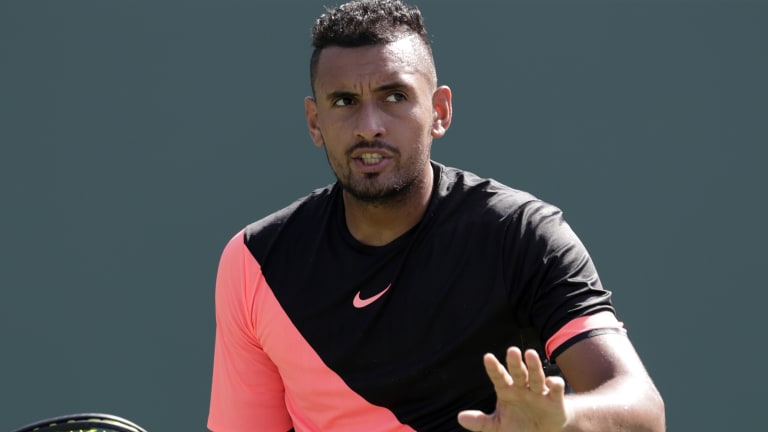 The decision to pull out of Roland Garros cast doubts over whether or not he'd be fit enough to play at Wimbledon, which starts on July 2.

However, Kyrgios said he felt good during a doubles match at the Surbiton International Challenger Tour tournament, where he was the surprise star attraction at the low-key event in suburban south-west London.

Playing with American Jordan Withrow against Indian pair Siriam Balaji and Vishnu Vardhan, Kyrgios finished on the losing side, going down 7-6 (7-2) 3-6 10-8 - with the final set being decided on super tiebreak.

However, he moved freely and served well during the 90-minute encounter.

"It's disappointing to lose, but it's tough on grass, especially in doubles, and anything can happen in super break," Kyrgios said.

"I was serving 100 percent, and I thought I served really well.

"I didn't put myself under any pressure and will play singles in Stuttgart next week."

Kyrgios retired injured in both his first-round clashes at Wimbledon and Queen's Club last year after defying medical advice and playing at the French Open.

He said this year he was given the same advice by his support staff and reluctantly listened to what they had to say to give himself the best chance to succeed on his favourite surface.

"I couldn't play the clay-court season last year properly because of a hip injury and at Queen's I slipped over and re-injured it and couldn't play Wimbledon," he said.

"I didn't have the chance to play in one of my favourite tournaments last year, but this year I feel pain-free and that is all I can ask for.

"It was a massive call not to play in Paris. When I saw my draw, I had the opportunity to do well.

"But I didn't want to put my grass-court season in jeopardy.

"I made a more mature decision this year.

"I had a lot of doctors and medical people telling me it was the smart move."

Kyrgios is once again travelling with his mother, who will spend the next month with him.

He appeared to be in a positive frame of mind, cracking jokes with photographers and ball kids on court and posing for selfies with school children.

"I haven't been in this head space before where I am looking forward to going out to training," he said.

"I think playing doubles has helped me enjoy myself again and I am going to stay here for the next few days and practice before going back playing singles again."

Watch your language when you talk about Florence. The poor are also robbed. Fiorentina fans responded to Ribery
Manchester United and Manchester City will compete for Coulibaly and Skrinjara
Juventus and Manchester City are the leaders in the fight for Adam Traore
Pep Guardiola: I Want Messi to stay in Barcelona
Kike Of Setian: Of course, we can win the championship. This is evidenced by facts and mathematics
Bartomeu on Messi: We have to renew the contract. Leo told me that he wants to finish his career at Barca
Chelsea are willing to pay Havertz 8 million euros a year and will soon start negotiations with Bayer
Source https://www.smh.com.au/sport/tennis/kyrgios-fit-and-ready-for-grass-season-20180605-p4zjgp.html?utm_medium=rss&utm_source=rss_feed