NRL head of football Graham Annesley has proposed rule changes be considered to reduce the number of contentious calls in matches.

Annesley has done a wonderful job since returning to the NRL to alleviate what was nothing short of a refereeing crisis. He still has more to do, but he’s on the right track.

Mind you, I can’t agree with his assessment of the first-half refereeing in the Origin decider. The referees totally got it wrong in this match. To suggest their first-half performance led to the exciting second half treats everyone who is not a referee with disrespect. Nice try, but no one is swallowing that.

Anyway, I got distracted there for a moment. That’s not the point of this column.

Over the past five years, the manner in which refereeing has dominated the spectacle of rugby league has been frustrating to all.

Exactly what motivated or led referees to officiating in this completely overzealous manner is best known to themselves. What is more concerning is the fact that the NRL gave them the latitude to run their own interpretation of the game, without any real understanding of the damage they were actually doing. 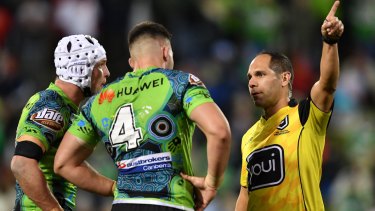 Nick Cotric is sent off by referee Ashley Klein against the Dragons at WIN Stadium.Credit:NRL Photos

It made the game frustrating for fans to watch and for players to play. The fact this mentality was directed down to the refereeing system in lower grades, semi-professional, amateur and even junior league levels created a myriad problems for coaches, players and spectators at all levels.

Anyone who has had to endure the hostility and abuse from spectators towards officials at junior league venues will know exactly what I mean. It’s bad for the young referees and it’s terrible for the kids to hear some of the grown ups on the sideline remonstrating as they do.

The situation for the NRL spiralled totally out of control at the beginning of last season with the ridiculous penalty blitz, before the governing body finally relented and instructed the referees to tone it down.

In the end, the NRL appointed Annesley, himself a former leading referee and administrator, to get the refereeing back on track. He has done a terrific job in his short time back in the role.

In particular, this year the bunker has been brilliant in delivering much quicker decisions. The technology is outstanding and the humans behind the system are definitely improving as they get more comfortable and confident under pressure. Please don’t forget this point. They are always under pressure.

This season started well with significantly less penalties, less nitpicking and less of the highly technical rulings in the play-the-ball that leave fans dumbfounded. You know the penalties I mean. The ones where everyone in the crowd goes, “What was that for?” 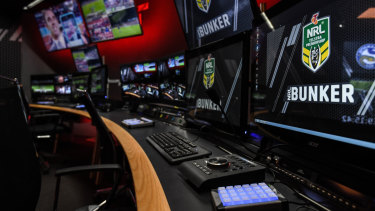 The NRL bunker and its operators have improved this season.Credit:Wolter Peeters

Annesley had things moving along nicely, until he started to acknowledge a few blatant errors and even dropped a couple of officials for missing vital calls. From that point, some referees have started to return to their old ways.

Referees have to understand that no one expects perfection. No one even expects complete consistency, even though this is often the catch cry of media commentators. The search for perfection is bound to fail, because similar incidents can always be interpreted in different ways. On some rulings there is no black-and-white solution; much of the game is grey.

Many of the significant changes made to the systems and procedures have come about because officials are trying to save the referees from criticism. They don’t want to be caught out missing something, rather than doing what’s right for the game of rugby league.

Much of their interference is too technical and quite often makes the game difficult to watch. 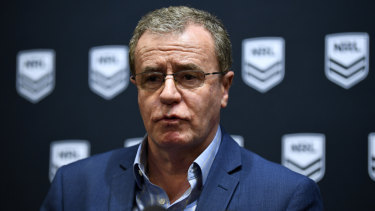 Anyway, again I apologise for getting sidetracked. Let’s get back to the point.

Annesley has suggested the game look at rule changes to make refereeing easier.

He said: “Some areas of the game are difficult to adjudicate – such as double movements and mid-air knock-ons during contests between opposing players for kicks.”

Annesley suggested that rule changes be considered to make it simpler. “I think we need to spend a fair bit of time on examining our current rules and whether we can actually make the game easier to officiate.”

He gave as an example. “Both players go up for the ball and it becomes a game of millimetres trying to distil whether the ball touches one player's hand and goes into another player's hand and that constitutes a knock-on. There is a case for us to say, 'does that really matter in a contest for the ball?' If two players go up for a ball and someone comes down with the ball, whether it be a defender or an attacker, does it really matter?"

I particularly liked the question he asked: “Does it really matter?”

Because if officials had taken this attitude 25 years ago, before we had to endure an unprecedented number of rule changes, rule interpretations, new rules, then new rules to cover up for the new rules that were wrong, refereeing procedures, the totally unnecessary introduction of a second referee and all the other rubbish our game has been subjected to, I’m sure things would’ve been very different indeed.

Before changing or introducing a new rule, or interpretation, wait a while and see if the rule change is really necessary in the long term. It used to take ages to change a rule. Now we change them as often as we change our underwear.

Always consider these questions. Is it a significant breach? Do we need a penalty at this point? Can I let that slide this time? 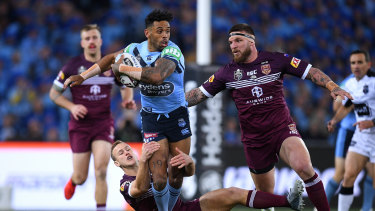 There were a flurry of first-half penalties in this year's Origin game three.Credit:Dan Himbrechts

Mid-air contests, double movements, possible obstructions, knock-ons and knock-backs, marginal offsides, putting the foot on the ball in the play-the-ball, THE BLOODY STRIPPING RULE, escorts running kick chasers off the ball, forward passes, mid-air tackles: all these things are primarily subjective calls. If we can simplify the rules – with a mentality of “does it really matter?” – we can make life so much easier for the referees and players.

The fans and media types will still complain if a decision goes against their team, but we can’t stop that from happening. The positive is that we can keep the game moving via less stoppages and interjections from the referees.

We don’t need seven-tackle sets from the 20-metre mark every time a ball goes dead, or for missed field goals, or for the attacking team dropping the ball over the opponent’s goal line, or a defender catching the ball on the full in his own in-goal. Why do you get punished 20 metres of territory and an extra tackle for these events?

We don’t need two referees. Never did. It’s time to give it up. At present, the pesky pocket referee is the one who sends most try referrals to the bunker. You can hear them: “Check this, check that, inside shoulder, outside shoulder, check everything!”

Our game doesn’t need the ridiculous sight of one team packing half a scrum to stop the game clock. It’s amateurish. Stop the clock at the infringement.

Our scrums are embarrassing. We don’t need them any more. They are from a different era.

I don’t think players should have to rake the ball back with their foot in the play-the-ball. This is a throwback to another era. The game is faster and better if we just allow them to roll it back. See the UK Super League. It works well.

That’s the whole bloody idea of the quick tap. No one is ready for it!

Back to Annesley’s words: “Does it really matter?”

Let’s start making rules and interpretations that make the game a better spectacle, rather than some forlorn and flawed objective of just trying to save referees from criticism and allowing technology to run the game.

Maybe you agree or disagree? Let me know your thoughts.

Meanwhile, Graeme Annesley, you are on the right track. Please persevere with this line of thinking, sir.

Pogba posted a photo with a hairstyle in support of BLM: ✊🏾✊🏾✊🏾✊🏾✊🏾✊🏾✊🏾
Borussia have notified Manchester United that they will not release Sancho for less than 120 million euros. There are no other candidates
Agent Hakimi: Zidane is the reason for moving to Inter. He did not call Ashraf, but Conte spoke about the project
Neymar has agreed with PSG that he will be released if Barcelona make an offer (As)
Wigan collapsed under external control. Perhaps all because of the murky betting in the Philippines
Pep on Manchester City's European Cup ban: I'm Sure we will be allowed to play in the Champions League
Defender Athletic Berchiche: Real Madrid have the best squad in the world
Source https://www.smh.com.au/sport/nrl/league-is-a-simple-game-complicated-by-people-who-should-know-better-20190719-p528tu.html?ref=rss&utm_medium=rss&utm_source=rss_feed

‘Under Albo nothing has changed’: Paul Murray breaks down Eden-Monaro

Giants give hub-bound Hawks a rough welcome to Sydney

Two die after being hit by car near Sydney hospital

Rabbitohs forced to fight for win over battling Bulldogs

Families advised to moderate calls to players in hubs

The toy sales that shot up during lockdown

Nationals and Liberal Coalition is ‘not a marriage’: Matt Canavan

'No explanation': Tigers set to accept four-game ban for Leilua