Opposition leader Deb Frecklington is adamant her party’s "no deal" policy with the Katter’s Australian Party or Pauline Hanson’s One Nation to form minority government remains in place. 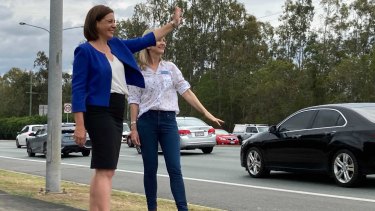 LNP leader Deb Frecklington (front) with Aspley candidate Amanda Cooper near the intersection of Beams Road and Gympie Roads in Carseldine. The party has promised a $90 million overpass at the junction.Credit:Toby Crockford

When asked on Saturday whether the party still had a "no deals" policy with Katter’s Australian Party and Pauline Hanson’s One Nation to form minority government, Ms Frecklington said "absolutely".

"We’ve got Deb Frecklington and her team getting around this great state of ours because we are focused on the real issues – the people of Queensland who want to get into work," she said.

"We have the highest unemployment rate in the nation, it is a shocking statistic. That is why I’m asking the people of Queensland to vote one for the LNP."

Ms Frecklington swung by the Chatsworth electorate in Brisbane’s south-east, which is held by the LNP’s Steve Minnikin by only 2.9 per cent.

In a fresh promise, the party has vowed to inject $20 million to fix Old Cleveland Road congestion by extending turning lanes and adding new pedestrian overpasses to remove traffic lights.

The LNP campaign bus visited the seat of Aspley on Brisbane’s northside, which is held by Labor’s Bart Mellish on a margin of just 1.17 per cent.

The state opposition has promised to cough up $90 million to build an overpass at the bottleneck junction of Beams and Gympie roads in Carseldine.

The campaign bus then headed up to the seat of Caloundra on the Sunshine Coast, where LNP incumbent Mark McArdle is retiring with a margin of just 3.41 per cent.

Stuart Coward, who has a background in business and community services, is the new LNP candidate while former soldier and corrective services officer Jason Hunt will run for Labor.

The LNP has promised to use $35 million to fast-track the Bells Creek Arterial Road construction in Caloundra, which Labor has also committed the same amount of money for the project, and fix the Caloundra Road and Nicklin Way roundabout for $15 million.

The final stop was the Noosa electorate, which is held by independent Sandy Bolton on a margin of 11.53 per cent. The LNP has pledged to duplication Beckmans Road at a cost of $10 million.

In other major aspects of the LNP’s $1 billion plan, the party has pledged to duplicate Cleveland-Redland Bay Road at a cost of $40 million, carry out a $120 million upgrade to Exit 57 on the M1 and complete a Centenary Motorway Bridge duplication for $245 million.

On the flip side, Labor has promised to create a second inland route from Charters Towers to the New South Wales border to take trucks off the Bruce Highway.

Both parties have also pledged to build the "second M1" between Brisbane and the Gold Coast.

Zinedine Zidane: I Never felt untouchable at Real Madrid. Criticism is normal
Marca made a Grand Declaration of love to Ramos. On the front page-100 reasons to extend Sergio's contract with Real Madrid
Manchester United can invite Tuchel. The coach of PSG is Interested
Napoli stadium renamed in honor of Maradona
The 2021 club world Cup will be held in Japan at the end of the year. 7 teams will play in it
De Bruyne - best attacking midfielder of 2020, Kimmich-Central, mane-winger (ESPN)
Ze Luiz was named the best player of Lokomotiv in November
Source https://www.smh.com.au/national/queensland/lnp-won-t-do-deals-with-katters-or-one-nation-as-1b-congestion-plan-unveiled-20201024-p5687d.html?ref=rss&utm_medium=rss&utm_source=rss_national

A lack of strong policies and strong leadership

What is forest bathing and should I try it?

Outcry as another suburban motel is used to detain refugees

As the commute returns, city workers jump on electric bikes

‘EXPLOSION OF CASES’: US suffers ‘deadliest stretch’ in history

Move over, Blue Poles: Jeff Koons is about to deliver us his startling new artwork

'I was broken': The crisis that led one of the world's best ballet dancers to call Australia home

She fell in love with a man called Trust: 'I remember looking at him and just knowing'

Barry Gibb: 'I pray for music to come back in a more romantic way'

The multifunction outfit so right for our times

All over the US, people are having awkward conversations

How do I survive a dinner party dress-up?

Even in the age of lockdown and masks, lipstick holds lasting power

Budgie smugglers are back – and more brief than ever

If comfort is the legacy of pandemic fashion, where do heels fit in?

Smarten up your summer skincare routine with sustainable sun protection

Morrison faces a balancing act in dealing with China's wrath

Parramatta the perfect setting for our next step as a nation

Recovery vs regression: How countries coped with COVID

Why we love explainers

Doyle lands some big ones but throws Gosford back

Tigers had to straighten up 'irritated' Hardwick to avoid derailment

'They have taken us forcefully': Rohingya sent to uninhabited island

NSW to investigate airline quarantine after case linked to US crew