Fremantle coach Ross Lyon is taking a gamble on the Land of the Giants as he tries to snap a worrying four-match AFL losing streak this weekend.

Lyon is under huge pressure to turn around his team's ailing fortunes, and the loss of Nat Fyfe and Stephen Hill for Saturday night's clash with Sydney hasn't helped his cause. 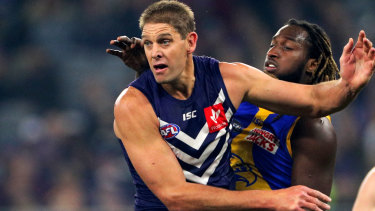 Ross Lyon will use Aaron Sandilands in a ruck trio for Freo that could trouble the Swans in Perth.Credit:AAP

The Swans are in the midst of a major ruck crisis and Lyon has identified that as an area he can exploit at Optus Stadium.

Lobb, who stands at 206cm, is expected to play most of the match as a forward.

It would leave 211cm Sandilands and the 202cm Darcy to tag team in the ruck for most of the game.

As for Sydney's ruck resistance?

The bulk of the work will fall to 197cm debutant Hayden McLean, who was snared by Sydney during the pre-season supplemental selection period.

The 20-year-old is set to receive assistance from the 196cm Sam Reid and 195cm defender Aliir Aliir.

It means Sydney's midfielders will need to try to pick off Fremantle's ruck taps if they are to at least break even in the stoppages.

But Lyon's gamble on three genuine bigs means Fremantle will be less mobile around the ground. 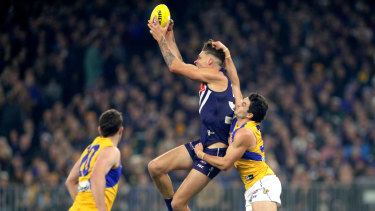 Rory Lobb has presented well for the Dockers in his first season with the club.

Fyfe was forced to spend several days in hospital this week to treat his infected right elbow with antibiotics.

It's the same elbow Fyfe needed surgery on in February to treat a painful bursa.

The Dockers are hopeful Fyfe will only miss one match.

Hill couldn't complete Thursday's training session because of another quad complaint, and has been replaced in the selected 22 by Ethan Hughes.

Lyon is contracted with Fremantle until 2020, but some fans are already calling for his head.

The veteran coach is determined to stick around and is confident his team aren't far off the pace.

"I know everyone's talking about the losses. No one is more frustrated and disappointed than me," Lyon said.

"No one (along with) the players are more invested in this club. It's our livelihood. We're professionals.

"We rely on each other under pressure and we need to dig in. So there's no flippancy here, but I can't get stuck on it.

"But within the four (losses), in three of them no one can dispute we were in those games right to the end."

The Swans will again be without star forward Lance Franklin, while veteran Kieren Jack has been dropped.

Mourinho won the 200th match in the Premier League. Only Ferguson reached this mark faster – just 4 matches
Jose Enrique: Liverpool need a playmaker. Is there a better option than Coutinho?
Leonardo wants to see Allegri at PSG, but the club still trusts Tuchel
Manchester United and Liverpool want to sign 15-year-old Sochaux defender of Kambala
Lloris and Son almost got into a fight after the 1st half with Everton. Before the 2nd, the players made up
Massimiliano Allegri: I am Looking for a project that will have ambitions to win
Simone Inzaghi on the scudetto fight: Lazio looks only at itself
Source https://www.smh.com.au/sport/afl/lyon-hopes-tall-freo-trio-can-exploit-sydney-ruck-woes-20190720-p5293h.html?ref=rss&utm_medium=rss&utm_source=rss_feed