Tim Clark said beaten favourite and "thin-skinned" Mandela reacted badly to the whip being used on him again as Peter and Paul Snowden were sent back to the drawing board with the talented colt.

The easing Mandela ($2.45), which was a noticeable betting ring wobbler after being shopped at odds on earlier in the week, again took exception to the persuader after throwing away a certain debut win at Canterbury. 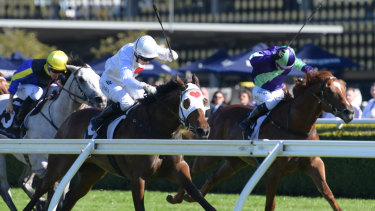 Yes indeed: Excellent Proposal comes down the outside to edge Pixel Perfect on the line. Credit:AAP

China Horse Club's $280,000 yearling was slightly tardy away from the gates and could finish no better than fifth in the two-year-old opener at Randwick on Saturday, which sent Richard and Michael Freedman's Excellent Proposal soaring into spring calculations.

But the fortunes of Mandela, which was sent back to the trials after his raceday antics earlier this month, dominated the post-race discussion.

Clark rued using the whip on the horse as he tried to burst into a gap from back in the ruck.

He doesn't like the whip, so I probably shouldn't have hit him. He just resents it.

"He must be thin-skinned," Clark told stewards. "He doesn't like the whip, so I probably shouldn't have hit him. He just resents it.

"I travelled OK, but not like an even money chance throughout the race. Even though I was getting out late I expected him to run third at worst. If he's 6-1 or 8-1 in the race you would say he's run well. The spruik around for him, he should have run third at worst."

Clark even used spurs as part of his gear to extract the best out of Mandela, who has twice been a beaten favourite in the early stages of his career.

Excellent Proposal ($11), which was a debut winner at Kembla Grange, swooped down the outside under Brenton Avdulla and nailed long-time leader Pixel Perfect ($34) in the shadows of the post to enhance his stakes claims.

Excellent Proposal remains among the nominations for the Golden Rose in September.

"We might give him a bit of a let-up and have a crack at some better races in the spring," Michael Freedman said. "He's still very raw and maturing. He might be one even better placed in the autumn.

"He's always shown us nice ability, but he's just a work in progress. I still think he's quite mentally immature, but I think there's a lot of ability there. If it's not in the spring, I really look forward to seeing what he's like in the autumn.

"We'd discussed before the race there didn't look a lot of pace on paper and we might have even ended up in front. But Brenton's a great rider and when he didn't begin as well as we would have liked, we took the option to take a trail. I guess that's good for his education that he was able to take a sit and finish off like he did."

Mandela's stutter wasn't the only misfortune for the favourites in the race. Joint second picks Havin' Fun and Starla also struggled. The former laboured in fourth after being given a gun trail by Blake Shinn, while Starla pulled up with heart arrhythmia.

"I followed the right horse and she never quickened in the race," Starla's rider Tommy Berry said. "I told [trainer] Chris [Waller] she didn't have a blow on the way back so she obviously looked after herself."

Pixel Perfect will be sent for a spell and target some of the fillies classics next season as trainer Gerald Ryan plots a path to black type for the filly.

"She looks as though she might get over a bit of ground and I can see her in a nice mile-and-a-quarter race later on," he said.

Marcelo will miss the rest of the season in La Liga due to an adductor muscle injury
Telephone Interview, disinfection of the rails, the ban lifts. We checked-antivirus measures in the NPL really work (well, almost)
David De Gea: I hope to play 400 more games for Manchester United
CAS returned to PAOK 7 points. AEK Carrera may not qualify for the Champions League
Pep Pro Champions League: Real Madrid will knock us out if Manchester City are thinking about the next stage
Quique Setien: Barcelona can keep their title chances until the last round. A lot of things happen in football
Klopp confirmed that Henderson is out for the rest of the season due to injury
Source https://www.theage.com.au/sport/racing/mandela-shies-away-again-as-proposal-pops-spring-question-20190720-p5291n.html?ref=rss&utm_medium=rss&utm_source=rss_feed