The wave of Australian female footballers looking to Europe is showing no signs of slowing down with Steph Catley the latest to move to the Women's Super League, joining the growing Australian contingent at Arsenal.

After years balancing club commitments in the W-League and USA, Catley has opted for the stability of one club per season in the burgeoning English WSL after signing a two-year deal with last year's champions, Arsenal. 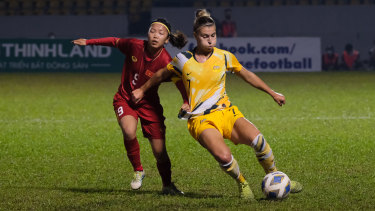 There in North London, she will link up with her Matildas teammate Caitlin Foord and former Melbourne City coach, Joe Montemurro, who has been in charge of the Gunners for the past two seasons.

“Arsenal is a place where I’ve imagined myself playing for a long time. Putting on that jersey is a dream come true," Catley said.

Sources close to the player suggest Catley has long been a target of Arsenal who first tried to sign her in 2019 but could not finalise a deal. However, the rapid growth of the women's game in England has proven too great a lure for Catley to resist.

She becomes the 10th Matilda to move to one of Europe's more traditional football nations over the past 12 months in a trend for Australian players that is showing no signs of slowing down, even in the face of a global pandemic.

The 2019-20 WSL season has been cancelled due to the COVID-19 pandemic but Catley has a chance to win silverware with Arsenal in the coming months with the club contesting the UEFA Champions League. Arsenal face PSG in the quarter finals on August 22.

There are 2 cases of coronavirus in Atletico. The match with Leipzig – August 13
Renzo Ulivieri: Pirlo is one of the most profound thinkers of world football. He knows more than most coaches
Pirlo wants to sign Tonali at Juve. Alternative – Locatelli
Before the match with Real Madrid, sterling watched a video of the defeat by Tottenham in the 2018/19 Champions League
Andrea Pirlo: I am Flattered to have received such respect and trust from Juventus
Former Manchester United midfielder angel Gomez has moved to Lille. He will spend the season on loan in Boavista
Tevez has extended his contract with Boca juniors until 2021
Source https://www.smh.com.au/sport/soccer/matildas-star-steph-catley-signs-for-arsenal-20200702-p558ji.html?ref=rss&utm_medium=rss&utm_source=rss_feed