Autism support services would undergo a $50 million “revolution” if the Coalition wins the November election.

A 24-hour autism helpline and a $4 million increase for early diagnosis services are among the promises that Opposition Leader Matthew Guy announced on Monday. 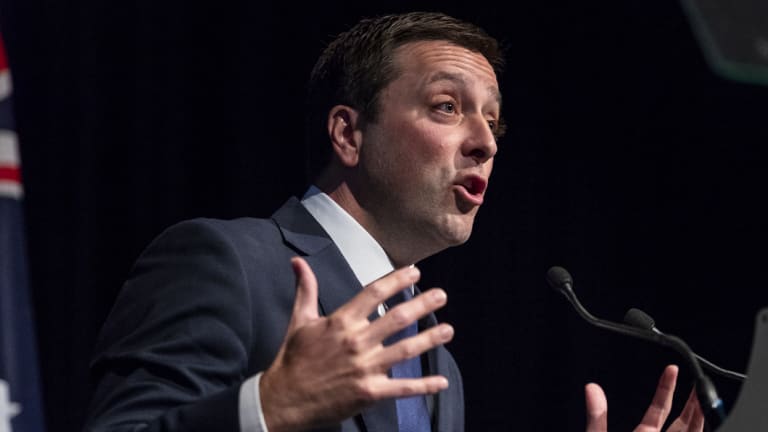 The peak autism support group, Amaze, would receive $2.4 million to expand their hotline to 24 hours.

The Coalition will also create a Premier’s Autism Advisory Council to tackle issues and deliver solutions for families dealing with the condition.

Student funding reappraisal dates will also be pushed back from the end of grade six to the end of year seven so that children can continue receiving the same level of support when they begin high school.

“More Victorians are touched by the wonders, the love of particularly kids with autism than ever before,” he said.

“No-one’s asking for miracles ... but what those families are asking for is help. This package will give that help.”

Amaze chief executive Fiona Sharkie said 85 per cent of Australians have contact with an autistic person but only about a third of those people knew what support they could offer.

She said autistic children had among the worst educational outcomes of any children with disabilities.

“But all that can change if the right support is provided in schools with the right investment,” she said. “There is a great opportunity for Victoria to really be the leading state in autism.”

The Olga Tennison Autism Research Centre’s Early Diagnosis Clinic for children aged up to three years old will be re-established if the Coalition is elected.

The Coalition would also set up an “inclusive education outreach taskforce” within the Education Department to work with mainstream state schools to support students with autism or other special needs.

The Opposition also promised to increase professional development for teachers to better support participation by students with autism.

Luis Garcia: Messi shows something new every year. I can easily imagine that he will play until 2025
Klopp on Henderson's injury: I don't know for sure yet, something's wrong with my knee. All we know is that it's not a small thing
Pavlyuchenko is seventh in the ranking of Tottenham's best forwards in the 21st century. Kane is the first (Squawka)
Manchester City made 93.7% of accurate passes in the match against Newcastle. This is an APL record
Ole Gunnar Solskjaer: 16 games unbeaten give confidence, but it is not something that Manchester United should aspire to
Havertz wants to go to Chelsea, he likes the project. Werner persuades him to go
Real Madrid has received almost 250 million euros from sales of Academy students over the past 4 years
Source https://www.canberratimes.com.au/politics/victoria/matthew-guy-promises-revolution-for-autism-support-services-20180917-p50482.html?ref=rss&utm_medium=rss&utm_source=rss_feed

NSW could join Victoria in lockdown

One public housing tower to remain in lockdown, restrictions to ease on others

Hunt future under a cloud as NSW sign Kyle Godwin

Olympian charged over fatal alleged hit and run at Freshwater

ASX bounces back from market slump

Talau: Brutal sessions with dad made me better

Rowling, Atwood among 150 authors warning of 'intolerance of opposing views'

‘SUBSTANTIAL’ NUMBER OF CASES: Virus blows out in lockdown towers

One public housing tower to remain in lockdown, as restrictions on others eased

Courageous Hong Kong visas will come at a price

Will Foran stay at the Bulldogs? Canterbury start talks with star half

Making sure your nest egg will last the distance

Please Explain podcast: the cost of our coronavirus resurgence

'It was over after 100 yards': Waugh reveals secret to Trumbull's success

Burgoyne out of Pies clash, Patton to return

Not enough evidence to say Politeness was doped in 2015 Emirates Stakes: stewards

Reintatement of academic sacked for not publishing enough research is upheld

'At your own peril': Penney warns Kiwis off Super Rugby 'isolation'

'It's not acceptable': Bevo unhappy that AFL acted after Clarko's outburst

'A terrific victory': Palace Letters to be released in full next week

'He's back and ready to go': Tigers recall Benji for Souths clash

Public patients to wait longer for elective surgery in Victoria

Get ‘engulfed’ by this $15m sky mansion

Indian filmmakers reach out to Aussies over pandemic divide

Dunn chasing one for the road with Rothenburg

Vixens and Magpies want a say in their relocation