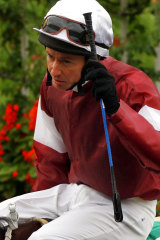 Hobby trainer Karen McCarroll was left scratching her head after near triple figure odds were bet about her mare Lady Riz last start.

The five-year-old ran a fast-finishing third at Coonamble, and now the Wellington-based trainer is hopeful that Lady Riz can go two better on Coonabarabran’s cup meeting on Sunday, despite once again being overlooked in early markets.

“She has been a slow learner and is starting to settle down on race days,’’ McCarroll said. ‘‘In the tie-up stalls, she used to be a handful but now it’s part of her routine.

“She is a mare that you have to keep balanced. If she gets unbalanced at any point in the race she loses the plot, so a rider like Matthew [Cahill] seems to have control over her, allowing her to run home.”

Lady Riz was an impressive winner at Wellington second up over 1400m on a soft track, so McCarroll won’t be using that as an excuse either if the surface becomes rain-affected.

“The Coonabarabran track is a bit tricky,’’ she explained. ‘‘It is more or less on the side of the mountain. It has a long run down the back straight before going down into a gully and then there is a rise home.

“It shouldn’t phase her though.

“She probably doesn’t want any further than a mile, but she doesn’t have the sprint for 1200m races – she gets left flat-footed. She is right in this race.”

De Ligt on 2:1 with Ferencvaros: Juventus needed to move the ball faster and act more assertively
The minges on debut for Barca: Very happy. I hope this is the beginning of something big and meaningful
You can ask in the locker room if you have the guts. Tuchel-journalist asked about the quality of the PSG game
Morata on 2:1 with Ferencvaros: it Seemed like a match 20 years ago. They played defensive football
Juventus for the first time in the 123-year history of the club played without the Italians in defense and goal
Koeman on 4:0 with Dynamo Kyiv: Today was the Barcelona we want to see
Holand continues to insist that he is a monster. Fastest in the history of the Champions League scored 15 goals (and added 16)
Source https://www.theage.com.au/sport/racing/mccarroll-putting-on-the-riz-again-with-unfancied-runner-20201024-p5689a.html?ref=rss&utm_medium=rss&utm_source=rss_feed

Drunk nurse flees on wrong side of road after crash

$10k grant to provide vulnerable kids with the essentials

‘Skin cancer cost me my job’: Fired after just 2 hours

From the Archives, 1987: I won't resign, says tough-talking Joh