Melbourne's inner suburbs are home to the most expensive childcare services in Victoria, with some centres among the dearest in the country.

An analysis of government data by The Sunday Age reveals the suburbs around Sydney Harbour made up eight of the nation's highest 10 average childcare centre fees before the pandemic struck. 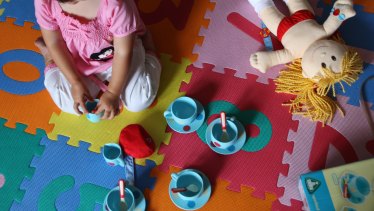 Childcare centres in Sydney and Melbourne's inner suburbs are the nation's most expensive.Credit:Peter Braig

But the area covering Melbourne suburbs Toorak, Prahran and Windsor comes in at seventh most expensive, while Brighton, Hampton, Sandringham, Black Rock and Beaumaris are in the ninth spot.

The Education Department data for the March quarter of 2020 reports average day care centre fees by statistical area, which are clusters of similar suburbs with up to 130,000 people.

It also reports how many centres in each area charged fees above the hourly cap, which the government bases its subsidy rates on. At the time the data covers, this was $11.98 an hour. It rose to $12.20 an hour from July.

When fees are higher than the capped rate, parents end up with more out-of-pocket costs.

Education Minister Dan Tehan says the subsidy means seven in 10 parents pay no more than $5 an hour, or $50 a day for childcare.

"Under the childcare subsidy, the hourly rate cap helps to place downward pressure on fees," he said.

"Since the introduction of the childcare subsidy, out-of-pocket costs for families are down 3.2 per cent."

Childcare costs have been in the spotlight after Labor unveiled a policy to increase the subsidy across the board and offer it to parents on higher incomes than the existing system.

Between April and July, the government made childcare free for parents in a bid to stop centres collapsing as children were unenrolled in droves. Three-quarters of services said the emergency package helped them stay afloat financially.

However, Australian Childcare Alliance president Paul Mondo says even with the fees and subsidy system back to normal, services in city centres are still doing it tough as parents working from home looked for care closer by.

In North Sydney-Mosman, parents paid an average of $14.55 an hour, or $145.50 for a typical day of care, before government subsidies.

Similarly in Victoria, while across the state 18 per cent of services charged fees higher than the cap, 65 per cent of those in inner suburbs did.

Parents with children in care in some of Melbourne's most expensive areas including Bayside and Glen Eira paid an average of $12.70 an hour, or $129.20 a day before subsidies.

On the top end of services in this area were: Chabad House of Malvern/Toorak, charging $166 a day before subsidies; and Guardian Childcare and Education Prahran, at $158 a day.

Victoria's state average fee was $10.75 an hour and across greater Melbourne the average was $10.90.

The ACT had the highest average fee in the nation, at $11.75 an hour, but even in its most expensive area – North Canberra – less than half the centres charged above the fee cap.

Bayern prepared a t-shirt with the name of Medvedev: Bayern Munich congratulated Russian tennis player Daniil Medvedev on winning the final ATP tournament
Andrea Pirlo: I feel the same way about Ronaldo as I Do about Work and Portanova. This is me
We study how the players sit in the locker room. Messi in the center, Lukaku wanted Drogba's place, and Roy Keane yelled at the young Pique
President Vasco da Gama: we need Balotelli in terms of fighting racism, not just as a player
Ronaldo, Messi, Lewandowski and Marquinhos nominated for best player at the Globe Soccer Awards
Frank Lampard: we need to win against Rennes - then we can rest the players
Leganes can rent Braithwaite. Barcelona bought him out for 18 million euros 9 months ago
Source https://www.smh.com.au/politics/federal/melbourne-inner-city-childcare-services-the-most-expensive-for-parents-20201024-p5687y.html?ref=rss&utm_medium=rss&utm_source=rss_feed

The winning novel about a gentle boy and his alcoholic mother

Unflinching in its detail, Shuggie Bain is a worthy Booker Prize winner

‘THOSE THAT DUMPED ME’: Conspiracist Evans’ message after sackings

How bookshops kept us afloat through lockdown

The Short Squeeze: China, Telstra and the ASX

The man who became a saxophone

Biden to name long-time aide Blinken as secretary of state

He's back - and this time it's serious

Bluey gets to play as federal arts funding unleashed

Crowds up to 5000 expected at races within weeks: Pakula