When Dejan “DJ” Vasiljevic is working out ahead of the NBA Summer League in July, he has two lines marked out on the court.

One is the NBA three-point line, which is further than the FIBA line used on Australian courts. The other is his own line, which sits beyond NBA range.

The Sydney Kings championship-winner expects to finalise who he will play with in the summer league in the coming week. He is working out with his trainer while also playing with Diamond Valley Eagles in the NBL1 South competition, where he has also been shooting his threes from behind the FIBA line.

“I feel like I shoot better from distance,” Vasiljevic told Hoops Heaven on Thursday.

“There are multiple lines down at the gym I work out in. There is the NBA line and then there is my line that is about a metre back from that.”

The Melbourne-raised 25-year-old has no doubt his shooting and his game can thrive at NBA level, but he will need to find a summer league team that moves the ball and doesn’t feature too many hungry players who forget to pass.

“My agent and I, we try to look at the best possible scenario – you want to go to a team who needs your skill set,” Vasiljevic said.

“There are a couple of teams who have me high on their list, they want to put me in the rotation and play me. You want to be on a team who don’t have any draft picks playing as they will want to play them.”

Vasiljevic starred for the Kings in the play-offs, nailing a three from NBA distance to win game two of the best-of-five series. Since coming home to his family in Melbourne, it has begun to sink in that he is an NBL championship winner.

He has re-signed with the Kings but with NBA and European out clauses as he aims to be in the NBA next season. If not, he will pick the best option between Europe or helping the Kings to go back-to-back.

“I was able to bounce back where I feel I was better this year than I was last year,” Vasiljevic said.

“I hit my recovery head-on. I didn’t get emotional. I knew I had a long recovery to come and just wanted to attack it.”

He is talking to several teams and he is confident his achievements with the Kings are rated highly by US teams, who use the summer league to decide which players to sign to pre-season deals.

“Some teams have me on their board as one of the best international shooters out there so that’s a big compliment for my work ethic,” Vasiljevic said.

“It’s cool but I’ve got so much more to prove. When you go over there, you’re playing against different athletes who are much quicker, much more athletic. I can’t wait for it.”

The Boston Celtics and Golden State Warriors tip off their best of seven NBA finals series on Friday (AEST).

The Warriors will have home-court advantage, which means they host the first two games along with, if needed, games five and seven. But the Celtics’ winning run shouldn’t be overlooked.

In 100 games across the regular season and play-offs, the Celtics went 25-25 [win-loss] to start the season and then 38-12 in their last 50 games after bringing guard Derrick White and centre Daniel Theis in late in the season. 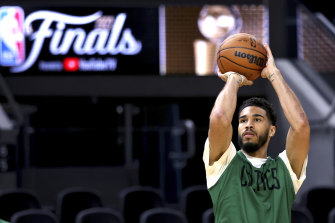 Jayson Tatum’s Celtics will face the very experienced Warriors in the NBA finals.Credit:AP

But the Warriors have a huge advantage in NBA finals experience due to championship winners Stephen Curry, Draymond Green, Klay Thompson, Andre Iguodala and Kevon Looney, who have a combined 1930 points in NBA finals games. Everyone else in the series, including the full Celtics roster, have zero.

Could Snyder leave the Jazz?

ESPN reported on Wednesday that Synder could leave the team if contract extension talks don’t improve. ESPN also said there has been no threat to walk away or end talks by either side.

Snyder is recovering from hip replacement surgery, which he had in the days after the Jazz were eliminated from the play-offs.

Snyder and Golden State Warriors coach Steve Kerr have eight seasons with their current NBA employer, and Utah has a six-year post-season streak.

Only Gregg Popovich (San Antonio Spurs) and Erik Spoelstra (Miami Heat) have been employed by their current team as head coach longer than Snyder.

Seattle Storm duo Ezi Magbegor and Steph Talbot were put on the WNBA’s COVID-19 protocols on Sunday, while Alanna Smith was let go by the Indiana Fever.

Magbegor and Talbot are yet to rejoin their team and have missed two games so far. They were joined in the protocols by Storm stars Sue Bird and Mercedes Russell, while the Fever’s decision to waive Smith was a surprise after signing her in the off-season and seeing her put on some promising performances in the early games. 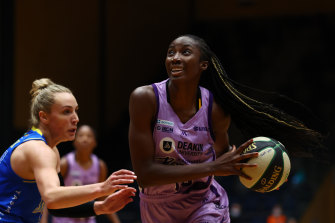 All three are in line to play for the Opals at the FIBA Women’s World Cup in Sydney in September, although they will all want to get back on court to stay in top condition.

Australian guard Kristy Wallace bucked the trend to have a career-high 17 points in the Atlanta Dream’s win over Phoenix on Monday AEST.

Wallace has moved into the starting line-up and she continues to play herself into a spot in the Opals team.

The WNBL has announced the key dates and format for the 2022-23 season.

Pre-season will start on September 21 and round one will tip off on November 3, just over a month after the end of the World Cup in Sydney.

The regular season will end on March 5, with each club playing 21 games. The semi-finals and grand final will be played as best-of-three series.