When I started hosting a TV show, I didn’t expect that every day when I signed off and returned to my computer, there’d be a message from a bloke telling me which particular implement or technique he’d employ to anally rape me, but there it was. I have now grown so used to threats of violence I often forget to report them. To do so often seems only to be trimming leaves from a weed, or playing an unwinnable game of whack-a-mole. 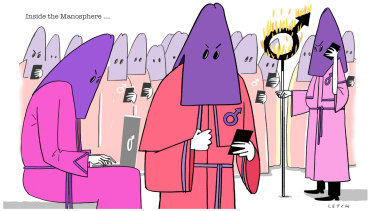 For others it’s much, much worse. For women of colour particularly. Some men receive foul abuse, especially Indigenous and Muslim men, but for women it is particularly virulent and violent. And there is growing evidence such threats are increasingly being acted on offline. So why don’t we take it more seriously?

This week, a new survey of international media workers released by the International Centre for Journalists and UNESCO found almost three in four women had experienced online abuse, harassment, threats and attacks. Crucially, one in five women had been abused and attacked offline, in ways “they believe were connected with online violence they had experienced”. And evidence suggests this abuse has grown worse during the pandemic.

Every time this happens to me, people tell me to get off social media. This is not the answer. Those scrotes will simply place another woman in the crosshairs.

We need to stop telling women to “grow a thicker skin” and instead turn our attention to the murky underworld of misogyny online known as the “manosphere” which fuels and foments this violence.

A chilling, important new book by British journalist Laura Bates, Men Who Hate Women: From Incels to Pickup Artists, the Truth about Extreme Misogyny and How it Affects Us All, is a potent call to start recognising how widespread and disturbing the manosphere is.

She describes it as an interconnected spectrum of different but related groups, linked by misogyny, “a vast spiderweb of sites, blogs, forums, chatrooms groups and social media accounts”, which young boys can easily “blunder across ... and find themselves stuck, then [become] gently rolled closer and closer to its centre with smooth efficiency”.

The manosphere is not abstract, she writes, but increasingly influential. Ideas about the need for rape to be tolerated, or legalised, a vast feminist conspiracy and the (false) claims about women lying about rape and domestic violence can be readily found on sites with many thousands of members and, she argues, are leaking into the mainstream in dangerous ways.

After Bates began a project called EveryDay Sexism, for a decade men sent her daily messages, often in their hundreds, “fantasising about my brutal rape and murder … letting me know which particular serial killers they’d particularly like to emulate as they end my life”.

As she studied these groups, she began to realise the men in these communities were becoming increasingly effective propagandists. We can now see their rhetoric – with use of the same false statistics – repeated by politicians, or even school kids.

Bates writes that in recent years she started hearing schoolboys “who already felt that they’d been poisoned against the idea of even having a conversation about feminism”. They were saying extreme things: “Feminism is a cancer, all women lie about rape, white men are the real victims of society.”

In this context, violence is frequently normalised. I was shocked when a 12-year-old boy generally known as a nice kid sent my daughter a series of messages on Instagram saying he wanted to come around to her house and choke her to death. Twelve. Where does this come from?

One thing that struck me reading this book is how fervently these online groups want to control women, and make rape acceptable. (The origin of the term “incel” is involuntary celibate – those who are unable to get women to sleep with them. Now incels argue legalising rape would make society fairer.)

If they are ever closed down for airing these views, they pop up elsewhere. Blokes Advice, an Australian Facebook page – which had half a million members – was shut down for glorifying sexual violence in 2016. Two years later Reddit was forced to close a community of 40,000 after a user asked for advice on how to get away with rape. Books by “pick-up artists” read like rape manuals, providing techniques to circumvent a woman’s refusal to consent.

Even a cursory search of this writing reveals statements such as: “Rape is essentially the act of ultimate validation and a rape accusation is the ultimate act of attention whoring …” And: “Telling a man 'no' is a way to weed out the weaklings from the men who know what they want (her).”

MGTOW (Men Going Their Own Way, a group that espouses ignoring women while remaining obsessed with them) and men’s rights groups are also intently focused on false rape allegations, which they incorrectly see as prevalent. As Bates points out, a man in Britain is 230 times more likely to be raped himself than be falsely accused of rape.

“These are the kinds of attitudes,” she writes, “that many people would like to think were ousted decades ago. Yet here we see a whole new generation of men being drilled in techniques for mistreating women.”

Some of this is now in plain view and even enabled by political leaders. On the day Donald Trump was elected President, TV cameras showed male university students in Sydney chanting “grab her by the pussy”. Two of our female politicians, Emma Husar and Sarah Hanson Young, have sat through court cases recently where lawyers argued about whether they were “sluts”.

Anyone who thinks this stuff does not have a tangible impact on women, and a chilling impact on their contribution to public life, does not understand the physical and psychological toll abuse can take.

Before the British election last year, 19 female MPs stood down, with several citing abuse as a reason for leaving.

We need to stop viewing digital terror and abuse so casually, as an inevitable part of life. As we saw with the Christchurch killings, terrorists and murderers inhabit the manosphere too, often spouting misogynist garbage, beating wives or threatening rape before they go into temples or public places, killing indiscriminately.

Bates has guts. It’s ugly work, shining torches into dark places, dragging hate into the open air, exposing malevolence. But this hate will only prosper if we look away. Sunlight kills parasites.

Julia Baird is a journalist and author. She hosts The Drum on ABC TV. Her latest book is Phosphorescence: on awe, wonder and things that sustain you when the world goes dark.

The Eintracht captain ended his career in the middle of the season for his son. He said goodbye to football by exchanging T-shirts with the referee
Frank Lampard: Leicester are in the RPL championship race. I don't want to say whether Chelsea are involved or not
Mancini on Pirlo: Difficulties at first - it's normal, even if you played at the top level
Phil Neville took over Inter Beckham
Jose Mourinho: You can buy one of the best defenders in Europe for 70 million, or you can take someone who needs development
Ex-Arsenal midfielder Wilshere has signed a contract with Bournemouth
Ole Gunnar Solskjaer: Pogba played superbly against Liverpool. Manchester United manager Ole Gunnar Solskjaer commented on the performance of midfielder Paul Pogba in the match of the 19th round of the Premier League with Liverpool
Source https://www.theage.com.au/national/men-who-hate-women-and-their-online-refuge-of-scoundrels-20201127-p56ika.html?ref=rss&utm_medium=rss&utm_source=rss_feed