Mexico City: After receiving a tip that one of Mexico's top crime bosses never slept at the same place for two nights in a row, Mexican authorities cased four homes for 72 hours before launching a raid that led to the arrest of the capo known as "El Marro" and several of his associates, officials said on Tuesday.

The capture on Sunday of alleged drug trafficker and fuel thief Jose Antonio Yepez, alias "El Marro," or "The Mallet," has removed one of the two bosses battling for control of Guanajuato state, an industrial powerhouse clouded by bloody gang wars. 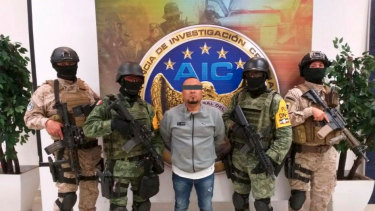 Mexican Defence Secretary Luis Cresencio Sandoval on Tuesday said authorities were keeping an eye on four possible addresses when they got word that Yepez arrived at one of the homes in Guanajuato.

"Considering the information that 'El Marro' didn't sleep two nights in the same place, also the presence of [a black truck and food delivery] to that address that confirmed the tip we had," leading authorities to obtain search warrants, Sandoval said.

A top target for the government, Yepez, boss of the Guanajuato-based Santa Rosa de Lima Cartel has been engaged in a struggle for supremacy in the state with the Jalisco New Generation Cartel (CJNG), one of Mexico's most powerful and violent gangs.

Another 1000 state security forces were deployed to "maintain the safety of citizens in those municipalities," Sandoval said at Lopez Obrador's daily press conference.

Authorities arrested six men and three women in the raids, including Yepez, and seized high and low calibre weapons, a grenade launcher, around $US6600 ($9241) in cash and rescued a 52-year-old kidnapped woman.

Lopez Obrador likely wanted to avoid the embarrassment his administration faced last October in western Sinaloa state after the brief arrest and then release of one of the sons of notorious drug lord Joaquin "El Chapo" Guzman as cartel gunmen overwhelmed security forces.

De Gea failed to repel 18 consecutive penalties in the Premier League. The last save was in 2014
Torres on leaving Liverpool: there Was no Xabi, Mascherano, Benitez, there was no project... Nothing happened!
Koeman can't be on the Barca bench. All due to the fact that the club is suing Setien
Suarez turned down an offer from Inter Miami in the summer. He could become the highest paid player in the MLS
Barcelona gave Aceme rental Almeria. The defender wanted to sign Juventus
Manchester United lost the first game of the Premier League for the first time in 6 years and for the third time in 29 seasons
De Gea took ayew's shot from the penalty spot, but the referee forced an Interruption. Zaa scored
Source https://www.theage.com.au/world/north-america/mexican-drug-lord-who-never-slept-two-nights-in-the-same-place-arrested-20200805-p55in4.html?ref=rss&utm_medium=rss&utm_source=rss_feed

'I didn’t let it destroy me': the fleeting moment that changed Cherie Currie's life

Turia Pitt: 'I like looking good and feeling confident about myself'

Your Weekly Horoscope for September 20-27

Johannisen speaks up, for his daughter

Richmond Tigers poised to strike after securing the double chance

Tigers poised to strike after securing the double chance