Pro-democracy leaders in Hong Kong are hailing the turnout for a key primary vote in the lead up to the September elections as a miracle after 600,000 voters surged past expectations, despite warnings they were breaching new national security laws. 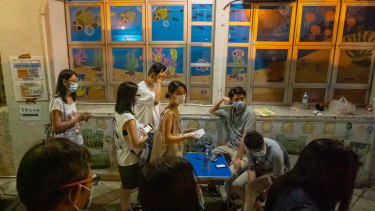 "When China attempts to crush dissents with fear and force, nearly 600,000 [Hongkongers] have used our actions today to ward off fear, cast ballots in this first and maybe last [primaries] and proved to the world that - our spirit of resistance will not be killed," he said on Monday.

"With our unbeatable determination for liberty, the draconian law marks the beginning of [Hongkongers] real struggle for freedoms without fear."

Benny Tai, a Hong Kong law professor who helped organise the primaries, described the turnout as a "miracle".

"Hong Kong people – after all these years, since 2003 – have demonstrated to the world, and also to the authorities, that we have not given up to strive for democracy," he said.

The primary was designed to pump up support for parties across the pro-democracy movement, with candidates across seven parties including Civic, Democractic and Labour all up for pre-selection. Wong and his party Demosisto did not stand after disbanding in the wake of the new security laws.

The turnout tripled organisers' expectations with up to 13 per cent of Hong Kong's eligible voters, or 600,000 people participating in the primary out of 4.5 million registered voters. 590,000 votes were cast digitally and 21,000 on paper. The results are expected to be announced on Monday night.

The primaries are a US-style pre-election ballot to select candidates for the Legislative Council election in September, across five electorates including Kowloon East, Kowloon West and Hong Kong Island.

Pro-Beijing lawmakers in the local legislature accused the pro-democracy camp of hijacking the political process through the primaries, arguing they are unfair to other candidates. Hong Kong government minister Erick Tsang said those "organising, planning and participating" in the primaries could be in breach of the new laws.

The laws, which were codified last week, will see acts of succession, subversion or threats to the Chinese state punished with sentences of up to life in prison. The US State Department escalated its warning to US citizens on Monday, warning they could be detained for private messages critical of the Chinese government.

They legislation was introduced after 15 months of protest in the former British colony over the increasing influence of mainland China. Local council elections at the peak of the protests in November saw pro-democracy parties secure a landslide victory, winning 17 of 18 district councils.

A majority vote of 35 seats or more for the pro-democracy camp in September could allow the Opposition to block legislation and the Chinese territory's local budget. Such a move is likely to increase tensions with Beijing and trigger further crackdowns. The Legislative Council functions like a state parliament and does not have control over national security, which is administered by the Beijing under the "one country, two systems" model.

The new national security laws have divided Hongkongers and produced wildly disparate poll results. The Hong Kong Research Association surveyed 1000 residents between July 2 and July 5 and found 66 per cent of respondents supported the implementation of the new laws.

The American Chamber of Commerce on Monday said half of its business members were considering leaving the Chinese territory, with 41 per cent percent stating they were extremely concerned about the new laws.

Ole Gunnar Solskjaer: We will see a better Pogba in the coming seasons. He is approaching the peak
Lothar Matteus: Bayern need to make a lot of mistakes to lose to the current Barca
Pedro said goodbye to Chelsea: it Was an honor to play for the club and be a member of a big family
Tammy Abraham: Lewandowski is the best striker in the world
Dinamo Brest will play Astana, Celtic will play CR Reykjavik in the 1st round of Champions League qualification
Ronaldo can move to PSG. Mendes communicated with Leonardo (Foot Mercato)
De Ligt will miss 2-3 months due to shoulder surgery
Source https://www.smh.com.au/world/asia/miracle-turnout-for-hong-kong-primary-vote-20200713-p55bkf.html?ref=rss&utm_medium=rss&utm_source=rss_feed